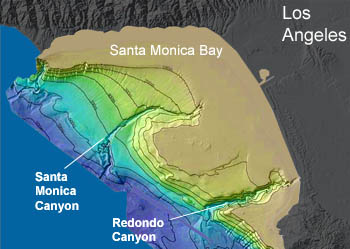 This map shows Santa Monica Bay and the Santa Monica and Redondo Submarine Canyons, which MBARI geologists are exploring with ROV Tiburon. Base map courtesy of US Geological Survey.

It is easy to imagine that the floor of the ocean, hundreds of meters below the surface, is a stable place, where things don’t change very quickly. However, along some parts of the California coast, geologists are finding that rapid change is the norm rather than the exception. For example, in many submarine canyons, flows resembling undersea avalanches periodically sweep large amounts of material out toward the deep sea. Similarly, undersea landslides can cause large expanses of sea floor to move hundreds of meters in a matter of seconds, sometimes triggering dangerous tsunamis.

This February, MBARI geologists are using the research vessel Western Flyer and remotely operated vehicle (ROV) Tiburon to explore several submarine canyons and undersea landslides off the Southern California coast. They are looking for signs of recent change and trying to understand how often such changes occur.

During the first part of February, MBARI geologist Charles Paull has been exploring the Hueneme, Santa Monica, and Redondo submarine canyons, two of which cut across the floor of Santa Monica Bay (see map below). Paull is collaborating in this research with scientists from the United States Geological Survey (USGS). Their primary objective is to study how much and and how often sediment moves down these canyons.

In addition to using the ROV to look for signs of erosion and deposition, Paull and the team have been collecting numerous samples of sea-bottom sediment using push cores and vibracores. By studying the layering patterns in these core samples and measuring the chemical and physical properties of the sediment itself, the researchers hope to be able to determine how long ago and under what conditions the various layers were deposited.

Paull’s team is also hoping to explore an intriguing mound on the floor of the Santa Monica Basin that is known to contain gas hydrates. Gas hydrates are ice-like materials that form in seafloor sediments when gasses such as methane combine with seawater and solidify at the low temperatures and high pressures of the deep sea. The MBARI and USGS scientists hope to collect samples of the hydrates and look for colonies of unique deep sea animals that may be using these chemicals as a food source.

In late February, MBARI geologist Gary Greene will be supervising ROV dives near a huge undersea landslide in the Santa Barbara Channel (see illustrations below). Greene first discovered and mapped this landslide in 1998, using MBARI’s newly created sonar maps of the sea bottom. Subsequently, Greene found evidence of sizeable cracks in the seafloor just west of the main slide. Greene will be returning to this area with ROV Tiburon to examine the landslide scarp and cracks and take samples of sediments. This information will be used to assess the stability of the potential slide area. 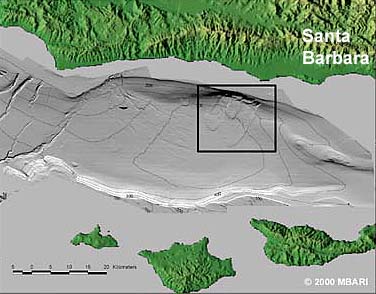 The boxed area in this map (enlarged below) shows a large submarine landslide near Santa Barbara, California, which MBARI researchers will be revisiting during late February 2005. Illustration: (c) 2000 MBARI 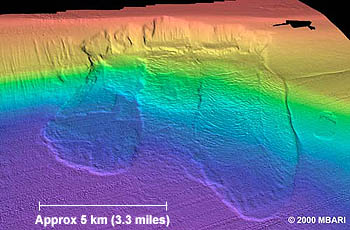 Close-up view of the large underwater landslide near Santa Barbara. MBARI geologists are investigating the possibility that additional failures could occur to the west (left) of this slide. Illustration: (c) 2000 MBARI