In the late 1970s, oceanographers were astounded to discover flourishing communities of animals clustered around deep-sea hydrothermal vents. These unique communities were sustained by chemicals such as hydrogen sulfide dissolved in hot water flowing out of the seafloor. Over the last 15 years, similar but less dramatic colonies of organisms have been observed in areas without visible signs of fluid flow. Scientists have generally assumed these organisms are also obtaining nutrition from chemical-laden water (in this case, cold water) seeping up through the seafloor. 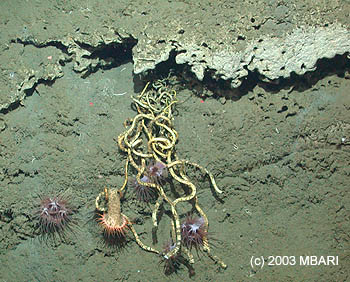 This photograph shows Vestimentiferan tubeworms growing from a small notch in the wall of Monterey Canyon. These chemosynthetic animals live off of hydrogen sulfide in the sediment, which would be toxic to most other animals. Below the tubeworms are several anemones attached to the canyon wall. Photo: (c) 2003 MBARI

MBARI geologist Charles Paull was one of the first scientists to study and name such “cold-seep communities.” However, after studying several hundred of these communities in Monterey Bay, Paull concluded that few are located in areas of significant groundwater flow. Instead he found that they most often occur in areas where previously buried sediments have been exposed by erosion. Such erosion may be caused by undersea landslides or strong, persistent currents. Paull describes these new findings in two recent papers in Geology and Geo-Marine Letters.

Paull began this research after noticing that marine scientists were labeling as “cold seeps” any sea-bottom areas where they saw bacterial mats or certain species of deep-sea clams and tubeworms (see below for more information on these unique animals). However, in most of these areas, Paull had a hard time finding any signs of significant seepage. For this reason, he believes that the term “cold seep” is misleading, and prefers to call such areas “chemosynthetic biological communities” (CBCs).

When CBCs were first discovered in non-hydrothermal areas, most scientists believed that such communities were relatively rare. For this reason, scientists were very excited when they first identified CBCs in Monterey Bay. Initially such communities were assumed to be clustered along geologic faults that underlie the bay. Such faults were believed to be conduits for groundwater, which seeped up through the seafloor in some locations, supporting CBCs.

In order to test this fault-line hypothesis, Paull decided to map all of the chemosynthetic communities observed in Monterey Bay by MBARI’s remotely operated vehicles (ROVs). Between 1989 and 2002, ROV Ventana and ROV Tiburon made more than 800 dives to the bottom of Monterey Bay, recording broadcast-quality video throughout each dive. After each dive, experts at MBARI viewed the video footage and recorded every identifiable animal and geological feature in a huge database.

Working with several other researchers, Paull searched this database to find every location where the MBARI experts had identified seeps, bacterial mats, clams, tubeworms, or carbonates (a type of rock that sometimes occurs near chemosynthetic communities). Their next step was to create a grid, dividing up the deeper seafloor of Monterey Bay (below 90-meters depth) into squares 25 meters on each side. Finally, they counted how many squares had been explored in ROV dives and what proportion were known to contain CBCs.

The researchers were surprised to discover that, over the 13-year period of their study, MBARI’s ROVs had explored less than one percent of the squares below 90-meters depth. Their second discovery was that, of the squares that had been explored by ROV, almost five percent contained CBCs. However, for reasons the scientists do not yet fully understand, all of these CBCs occurred below 550 meters. Below this depth, CBCs were even more common, occurring in almost one out of ten squares explored by ROV.

These data also showed that, contrary to expectations, CBCs were not preferentially located within mapped fault zones. Instead, many were located near steep slopes and landslides along the edges of Monterey Canyon, as shown in the map below. 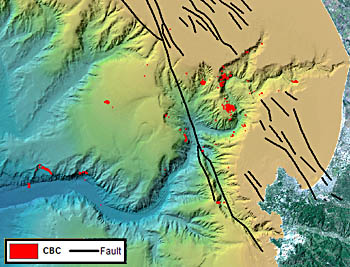 This map of Monterey Canyon shows the locations of chemosynthetic biological communities (CBCs) as red dots. Black lines are faults mapped within the bay. Contrary to scientists’ expectations, many of the CBCs are not located near known faults. Image: (c) 2005 MBARI

Based on these observations, Paull developed a new theory to explain how and where chemosynthetic communities form. He hypothesized that, rather then being sustained by chemicals in water seeping out of the sea bottom, most of the CBCs in Monterey Bay relied on chemicals that were already present in buried sea-bottom sediments, but had been exposed to seawater by undersea erosion or landslides.

Having found circumstantial evidence that many “cold seeps” were not connected to significant sources of groundwater, Paull joined with other MBARI researchers to test his new theory. They performed seven deepwater ROV dives to explore CBCs at a well-documented undersea landslide known as “Tubeworm Slump.” During these dives, the researchers found numerous CBCs in small caves and notches near the top of the landslide. 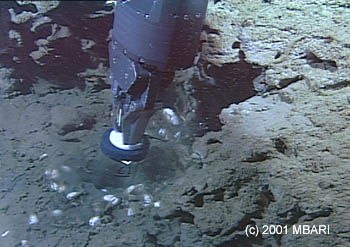 Close-up view showing the manipulator arm of ROV Tiburon pushing a clear plastic core tube into the sediment near a small colony of deep-sea clams in Monterey Canyon. Sediment samples such as this help scientists understand the complex chemistry that helps these chemosynthetic clams survive. Photo: (c) 2001 MBARI

The researchers used ROV Tiburon’s bright lights and video cameras to peer into the deep recesses of these caves, trying to find out how many and what types of animals were present. They also collected sediment and pore-water samples and measured the thickness of the sediment in various areas. Using carbon-14 dating, the researchers were able to estimate how long different parts of the seafloor had been exposed, as different parts of the slump eroded over time.

One thing the researchers noticed at Tubeworm Slump was that the types of chemosynthetic animals at each site varied with the shape of the sea bottom. For example, chemosynthetic clams were most abundant in steep areas or shallow notches covered with a thin layer of sediment. In contrast, tubeworms were more common in small- to medium-sized caves (up to about one half meter across). Larger caves (up to about one meter across) were sparsely populated, with only a few larger tubeworms present. The largest caves had no chemosynthetic animals at all.

Based on their observations and measurements, Paull and his team developed a theory about how these communities might change over time: Immediately after a large submarine landslide, the chemicals that support chemosynthetic organisms would be exposed on the seafloor. CBCs would grow in these areas, consuming chemicals that continued to diffuse slowly out of the sediments. Carbon-14 dating suggests that this process could last for centuries after the initial slide.

Since bacterial mats can only make use of hydrogen sulfide within a centimeter or two of the sea bed, they might be seen only in recently exposed areas. Chemosynthetic clams, whose feet can reach down several centimeters to collect hydrogen sulfide, would colonize areas where the sea bottom had been exposed for some time and covered with a thin layer of sediment. Tubeworms could colonize areas where hydrogen sulfide was completely used up at the surface but was still available in the subsurface, by extending their “roots” over a meter into the bedrock. Such roots might even weaken the bedrock, eventually helping form the shallow caves seen by the researchers.

This work may encourage geologists to take a closer look at origins of “cold seeps” elsewhere in the world, and may also impact scientist’s understanding of deeper geologic features. As Paull notes, “CBCs are one of the primary tools oceanographers have used to map patterns of fluid flow along continental margins. But a significant proportion of these communities may have nothing to do with regional fluid flow… Perhaps we have been trying to use these communities as windows into deep subsurface geology, when in fact they may be just wallpaper.”

What are chemosynthetic biological communities?

Chemosynthetic biological communities (CBCs) are localized colonies of animals on the seafloor that are based on chemical sources of energy instead of sunlight. Most animals in the deep sea eat other animals or feed on the slow rain of dead and dying material that settles down from the sunlit waters above. Chemosynthetic organisms, on the other hand, have evolved ways to live off of methane or hydrogen sulfide—chemicals that are poisonous to most other creatures.

So where do these chemicals come from? Sea-bed sediments usually contain organic material that has settled down from the surface waters. Bacteria in the sediments break down this organic material into simpler compounds such as methane (sometimes known as marsh gas or natural gas). Methane can also be dissolved in groundwater that flows through sea-bottom rocks.

When methane from either source comes in contact with seawater that has very little dissolved oxygen, specialized bacteria often grow. These bacteria consume methane along with sulfate from seawater, and release hydrogen sulfide (the chemical which gives rotten eggs their smell). Although hydrogen sulfide is toxic to most animals, chemosynthetic organisms have evolved ways of using this chemical as a food source.

Three main groups of organisms typically live in the chemosynthetic biological communities of Monterey Bay. Each of these is described briefly below. Paull’s recent work suggests that each of these organisms is able to exploit hydrogen sulfide at different depths in the sediment. 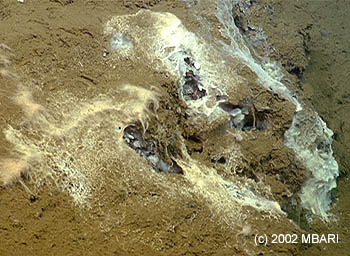 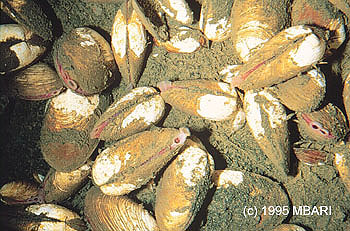 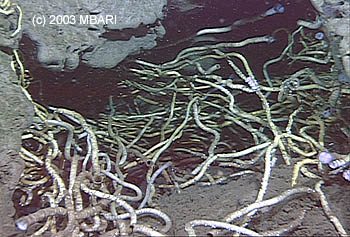 Vestimentiferan worms
Tangled communities of tubeworms live in many of Monterey Bay’s chemosynthetic biological communities. Like Vesicomyid clams, these tubeworms obtain nutrition from sulfur-loving bacteria in their guts. Their long roots can burrow up to 2 meters into sediment or bedrock in search of methane and hydrogen sulfide for their bacterial food providers.