Following the trail of sand in Monterey Canyon 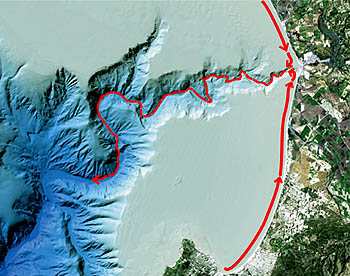 The red arrows in this illustration show how beach sand is carried parallel to shore along Monterey Bay beaches until it reaches the head of Monterey Canyon at Moss Landing. Entering the head of the canyon, this “trail of sand” flows down through the axis of the canyon, as described in Charlie Paull’s recent paper. Image (c) 2005 MBARI

Each winter, storm waves sweep thousands of tons of beach sand along the coast of Monterey Bay. This sand is carried parallel to shore until it reaches Moss Landing, where it enters the head of Monterey Canyon. At that point, the fate of the sand has been less clear. However, a recent paper by MBARI geologist Charlie Paull sheds new light on the “trail of sand” in Monterey Canyon.

The channels of active submarine canyons are notoriously difficult to study. Visibility is often very poor. Worse yet, periodic sediment flows can damage or destroy expensive oceanographic equipment. Despite these challenges, MBARI geologist Charlie Paull has been intensively studying the channel of Monterey Canyon using sonar mapping, sea-bottom instruments, and MBARI’s remotely operated vehicles. He recently published the first detailed description of sediment deposits in the upper section of Monterey Canyon. This study appears in the September/October 2005 issue of GSA Bulletin. 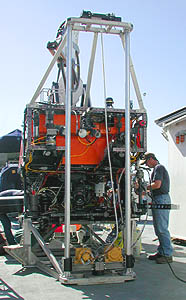 The underwater vibracoring system attached to ROV Ventana can collect cores up to 2.5 meters (8 feet) long. During operation, a core tube is suspended between the two upright struts. Photo: Todd Walsh (c) 2004 MBARI

Over a three-year period, Paull and his associates collected 92 sediment cores within Monterey Canyon using MBARI’s remotely operated vehicle (ROV) Ventana and a custom-designed underwater vibracoring system. This system uses a small motor to vibrate a metal core tube, liquefying the sediment beneath the tube and allowing the tube to be pushed into the sea bottom. The tube is then carefully pulled out of the sea bottom and returned to the surface, carrying the sea-bottom sediments inside. Paull combined sediment core information with detailed sonar maps of the canyon bottom to find out where different types of sediments were located within the canyon.

Paull discovered that little or no beach sand enters the canyon from its sides or collects on the canyon walls. Instead, the sand flows only in a narrow stream down the main canyon axis. Paull was surprised to discover that this trail of sand had sharp boundaries where it met the canyon walls. “It was as distinct as the river channel of the Salinas River. There was no mixing of sediments around the edges of the channel. I thought it would be sloppier than that.” 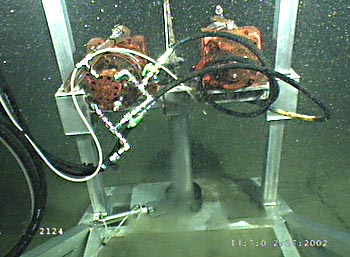 This photo taken by ROV Ventana’s video camera shows the vibracoring system in action. The core tube has been pushed into the sediment until only the upper 30 cm (12 inches) is exposed. The orange motors on either side of the tube are powered by the ROV’s hydraulic system and create vibrations that help sink the core tube into the sediment. Photo: (c) 2002 MBARI

In his cores, Paull saw no examples of the typical sediment pattern normally associated with submarine-canyons—a repetitious set of distinct layers, each of which contains coarse sediments at the bottom that gradually become finer toward the top. Paull points out that these stereotypical “turbidite” deposits are more likely to be found in submarine fans or in the deeper portions of submarine canyons. In these areas, currents are weaker, sediments are finer, less scouring occurs, and sediment layers and structures are more likely to be preserved in the geologic record.

Instead of these predictable repeated sediment sequences, Paull observed either thick, uniform sand layers or chaotic mixtures of beach sand, gravel, and even cobbles (which made coring very difficult in some cases). Such coarse materials were probably transported along the canyon bottom by something like an underwater debris flow. Paull is still not sure about the exact nature of these flows. He notes that although coarse deposits are found only within the main channel of the canyon, in some cases they may extend 10 to 20 meters up the canyon walls. 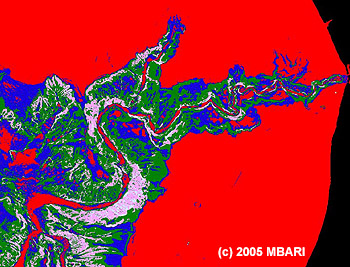 Based on current measurements and damage to canyon-bottom instruments, Paull believes high-velocity sediment flows occur several times a year in the upper part of Monterey Canyon. However, most of the material from these flows is not carried all the way down the canyon, but accumulates on the flat bottom of the main channel.

Paull was surprised to discover that the upper part of Monterey Canyon has been accumulating sediments. However, this may be a temporary situation. As Paull is quick to point out, “The fact that the canyon is there, and has been there for at least several million years, indicates that in the long term, it is being eroded, not filling. This implies that there must be some very large events that flush huge amounts of material out to the deep sea, as evidenced by the size of the Monterey Submarine Fan.” Paull believes that these really large flushing events may occur on the order of every 1,000 to 100,000 years.

Although none of us may live to see such future “flushing” events (and we might not want to), ROVs and other modern oceanographic tools are providing geologists like Charlie Paull with new insights into the history and the future evolution of Monterey Submarine Canyon. 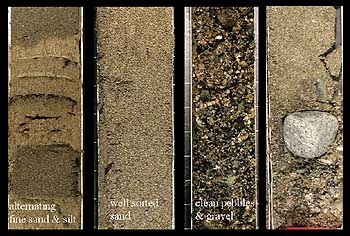 Sediment cores from the axis of Monterey Canyon
contained a wide variety of coarse material,
from sand and silt to large cobbles. Each core is about seven centimeters (2 3/4 inches) across. Image (c) 2005 MBARI 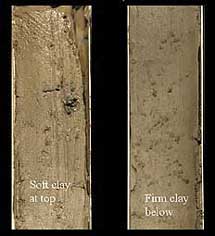 Core samples from the sides of Monterey Canyon contained mostly clays that drift in from the surrounding continental shelf. Image (c) 2005 MBARI