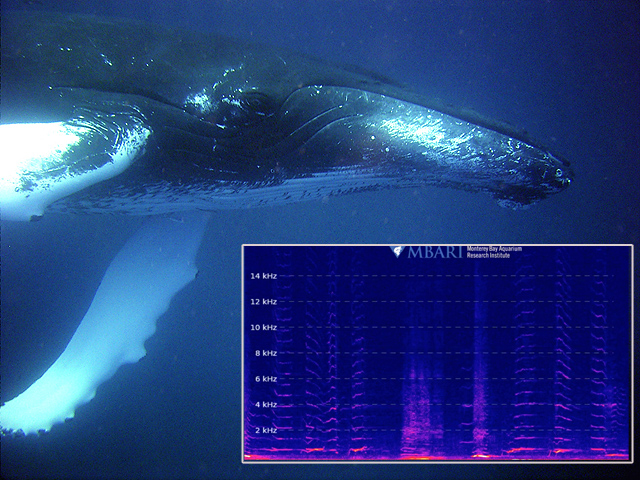 Humpback whales are one of most common whales heard on the MARS hydrophone. The inset shows a spectrogram of humpback whale songs from Monterey Bay. Whale image courtesy of NOAA.

For centuries poets and writers have imagined the depths of the ocean as eerily quiet. But scientists now know that the oceans, and especially coastal areas, are full of sound from both natural and human activities. Starting this week, anyone can eavesdrop on sounds in the deep sea via a continuous audio stream that carries live sound from 900 meters (3,000 feet) below the surface of Monterey Bay. 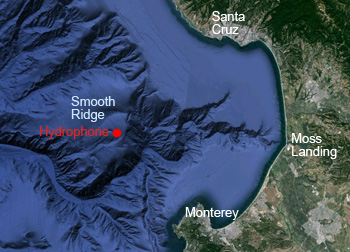 The MARS hydrophone is located on Smooth Ridge, just outside of Monterey Bay. Basemap: Google Maps

The sounds on this stream come from an underwater microphone (hydrophone) that the Monterey Bay Aquarium Research Institute placed on the seafloor in 2015. The hydrophone is located about 30 kilometers (18 miles) from shore, just west of Monterey Bay. It is attached to the MARS undersea cabled observatory, which carries data from the hydrophone back to shore.

For over two years MBARI researchers have been fascinated by the variety of sounds captured by this hydrophone. “When we first listened to these recordings we thought they were wonderful,” said lead scientist John Ryan, “and we wanted to share them with the public. I’m excited that we’ll finally have a chance to do this.”

Although the MARS hydrophone is located on the deep seafloor, most of the sounds it picks up are from animals and activities higher up in the water or even at the sea surface. For example, it is common for the hydrophone to pick up the calls of sea lions, dolphins, and other near-surface animals, as well as the sounds of rain, waves, and wind blowing over the sea surface.

High-pitched sounds, such as dolphin clicks, do not travel very far through the water, so if these sounds show up in the stream they are probably being generated within a few kilometers of the hydrophone. However, the low-pitched sounds of ship engines can travel dozens of kilometers, and some whale calls may come from animals hundreds of kilometers from Monterey Bay.

The MARS hydrophone can capture sounds both above and below the range of human hearing. The new live stream does not carry high-pitched sounds above human hearing, but it does include very low sounds such as those produced by some whales. Listeners can hear these sounds if they have good headphones or subwoofer speakers.

Ryan notes that sounds in the bay can vary dramatically. “It can be quiet at times, and then go from quiet to cacophony in minutes. So if people don’t hear much at one point in time, they should definitely check in again later.”

There is a 10-minute delay for computer processing and archiving between the time when the sounds are captured by the hydrophone and the time that they show up on the audio stream. 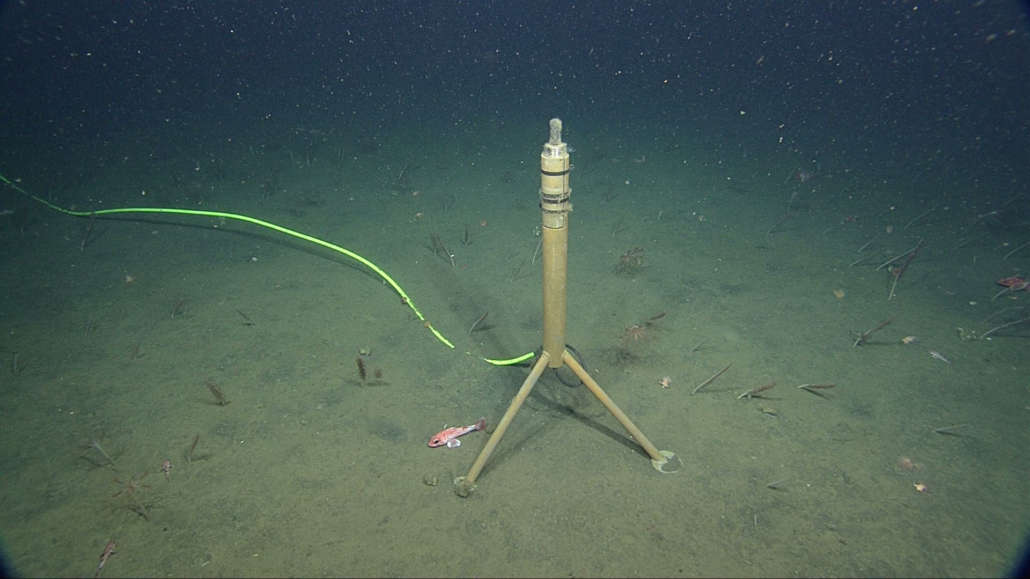 The MARS hydrophone sits on the seafloor on Smooth Ridge, just outside of Monterey Bay. It is connected to the MARS cabled ocean observatory, which supplies power and a high-speed data connection to shore. Image: © 2017 MBARI

To help listeners explore the variety of sounds from the hydrophone, the MBARI team also prepared an online “listening room” web page. Recordings on this web page help visitors identify and learn about the calls made by different types of whales and dolphins, as well as natural processes such as rain and earthquakes.

Ryan explained, “Using the listening room as a model, we are currently building a soundscape exhibit for the Monterey Bay National Marine Sanctuary Exploration Center in Santa Cruz. This will allow thousands of visitors to hear the sounds of Monterey Bay.”

For researchers and others who would like to explore sounds previously detected by the hydrophone, the MBARI team created a web page where visitors can browse through two and one half years of spectrograms. Although visitors cannot hear the sounds using the spectrogram browser, they can look for certain types of sounds or find out what the hydrophone recorded during certain days or months.

MBARI researchers are collaborating with scientists at the Monterey Bay National Marine Sanctuary, the US Naval Postgraduate School, Moss Landing Marine Laboratories, the University of California at Santa Cruz, the Scripps Institution of Oceanography, and other organizations to analyze the sounds from the MARS hydrophone. Their work is revealing new information about the behavior of whales and other marine mammals along the Central California coast.

Beyond their scientific value, the recordings from the MARS hydrophone are fascinating in their own right. So even if poets and writers have to give up the idea of a silent sea, the sounds revealed the MARS hydrophone provide a wonderful and insightful alternative.

Click on the player below to hear the live streamed audio

October 11, 2021 – MBARI makes its extensive archive of acoustic data accessible to researchers around the world via the Amazon Web Services cloud.
June 2, 2021 – The COVID-19 pandemic enabled a rare opportunity to measure the relationship between shipping traffic and the marine soundscape.
Oct 1, 2020 – Recordings from MBARI's deep-sea hydrophone show that blue whales mostly sing at night when they are feeding, but are more likely to sing during the daytime when they are migrating.