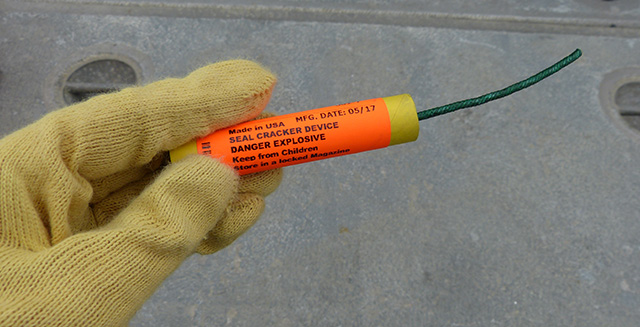 Seal bombs are small explosive charges that fishers throw into the water in an effort to scare sea lions away from their nets. Image: Simone Baumann-Pickering / Scripps Institution of Oceanography

Using recordings from MBARI’s deep-sea hydrophone, marine-mammal researchers have found that the sounds of seal bombs could have significant impacts on the behavior of harbor porpoises in and around Monterey Bay. Seal bombs are explosive charges (roughly equivalent to an M-80 or cherry bomb) that commercial fishers throw into the ocean to discourage sea lions from interfering with their operations.

The research was published earlier this year in the journal Frontiers in Marine Science. It was a joint effort involving scientists at the National Oceanic and Atmospheric Administration’s Southwest Fisheries Science Center, Moss Landing Marine Laboratories, MBARI, the US Naval Postgraduate School in Monterey, the Scripps Institution of Oceanography, the University of Tuebingen in Germany, and the Monterey Bay National Marine Sanctuary (MBNMS). The research was conducted in response to recommendations from an MBNMS working group on ocean noise.

John Ryan, who manages MBARI’s deep-sea hydrophone project, has been hearing seal bombs in his recordings ever since the hydrophone was first deployed in 2015. “The loud and sudden noise from seal-bomb explosions was one of the first sounds that we could not immediately identify,” Ryan commented. “I did not expect to hear underwater explosions in a National Marine Sanctuary.” Even though MBARI’s hydrophone is located on the deep seafloor, 900 meters (almost 3,000 feet) beneath the surface, it records the sounds of thousands of seal-bomb explosions each year.

This graph shows the number of seal-bomb explosions recorded by MBARI’s deep-sea hydrophone each month during the period of this study. Image: John Ryan

Seal-bomb noise was most common at night during summer and fall. This suggests that the explosives were primarily being used on boats fishing for market squid or possibly anchovies. The hydrophone also detected large numbers of explosions during the spring and winter of 2018.

Historically, seal bombs have been even more commonly used in Southern California, where researchers at the Scripps Institution of Oceanography detected over 3,000 explosions during a single evening. Seal bombs are currently legal in California. However, they were outlawed in the Pacific tuna fishery in 1990 because of the potential harm they might cause to dolphins.

Ironically, several studies have shown that seal bombs may briefly startle sea lions, but do not discourage them from approaching fishing boats in search of food. As the researchers put it, sea lions are “strongly motivated by easily accessible, abundant, high-quality food” [such as anchovies or squid trapped in nets]. In fact, there is some evidence that the sounds of seal bombs can actually attract sea lions–a phenomenon known as the “dinner-bell effect.”

At close range, seal bombs are extremely loud, reaching volumes of over 200 decibels, and this sound can travel underwater for tens of kilometers. The exact distance, however, depends on several factors, including the shape of the seafloor. In this study, the researchers used computer models to estimate how the sound of a seal bomb detonated along the coast northwest of Santa Cruz (a popular squid-fishing area) would travel around Monterey Bay. They then compared the area affected by this sound with the areas most frequented by harbor porpoises. 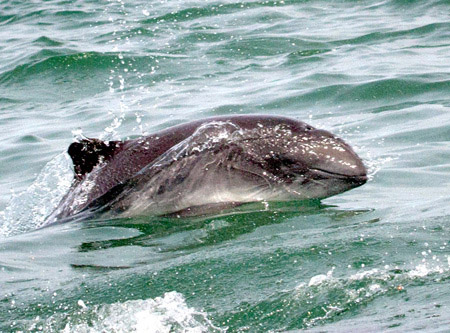 Harbor porpoises are not typically found in harbors, but they do forage relatively close to shore, usually in water less than 100 meters (330 feet) deep. Rather than migrating widely, they tend to stay within a particular home range. Researchers have identified a sub-population of harbor porpoises that forage in and around Monterey Bay, from Pigeon Point to near Point Sur, an area frequently used for squid and anchovy fishing. 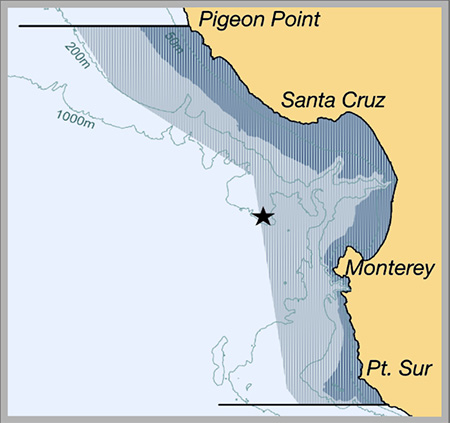 The light gray area on this map shows the official range of the local population of harbor porpoises in and around Monterey Bay. The black star indicates the location of MBARI’s deep-sea hydrophone. Image: Anne Simonis.

Harbor porpoises typically hunt anchovies during spring and fall, and market squid during the winter. Since they are pursuing the same animals as commercial fishing fleets, harbor porpoises are likely to be in the same areas at the same time, perhaps putting themselves in harm’s way when it comes to the effects of seal bombs.

Harbor porpoises rely on sound to navigate, hunt, avoid predators, and communicate with one another. The researchers suggest that, because of their limited range, relatively small populations, and tendency to forage in one particular area, localized groups of harbor porpoises (such as those in the Monterey Bay population) could be particularly vulnerable to impacts from human activities.

Seal-bomb explosions and other human noises can affect porpoises by damaging their hearing (in extreme cases) or by interfering with essential activities such as feeding and reproduction. There have been no direct experiments showing how these explosions affect harbor porpoises, but field observations showed that the porpoises are very sensitive to the loud noises produced by pile driving and seismic air-gun surveys. Previous studies also demonstrated that harbor porpoises are more susceptible to hearing damage than most other dolphins and porpoises.

Comparing the frequencies of sounds produced by seal bombs with the sensitivity of harbor porpoise hearing, the researchers concluded that the sounds of seal bombs are unlikely to cause physical harm to harbor porpoises around Monterey Bay. However, seal bomb explosions could affect the animals’ behavior. For example, previous studies showed that harbor porpoises stopped foraging when they heard noise from ship traffic or seismic surveys. 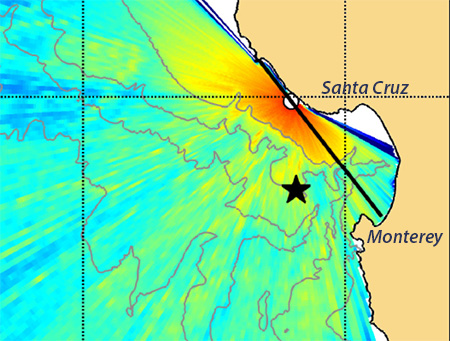 This illustration shows how the sound of a single seal bomb northwest of Monterey Bay would change with distance. Red indicates areas of loudest sound. The black star indicates the location of MBARI’s deep-sea hydrophone. Image: John Ryan.

Combining their acoustic models with the results of previous experiments, the researchers estimated that the sound from a single seal bomb could affect the behavior of harbor porpoises as far as 118 kilometers (73 miles) away. For comparison, Monterey Bay is only about 35 kilometers (22 miles) across.

Summarizing these findings, the authors wrote, “Considering the overlap of harbor porpoises with purse seine fisheries within Monterey Bay and the expected seal-bomb noise propagation, it is possible that harbor porpoises are exposed to noise from seal-bomb explosions throughout much or all of their preferred habitat.”

Historically, harbor porpoises were often trapped in gill nets used in commercial fishing around Monterey Bay. However, in 2002, gill nets were banned in water shallower than 110 meters (360 feet) in an effort to protect these animals. The new paper suggests that the sounds of seal bombs may pose a threat to harbor porpoises that is less severe, but also harder to quantify.

The MBNMS Sanctuary Advisory Council recommended that the staff work with all parties to minimize the use of seal bombs and develop effective alternatives. The authors of the recent paper point out that any program addressing seal-bomb noise should take into effect the most sensitive species in the area, adding, “To the best of our knowledge, the most acoustically sensitive marine mammal species that resides year-round in Monterey Bay is the harbor porpoise.”

Reflecting on these findings, Ryan said, “Listening from the deck of a boat, it is hard to fathom the intensity and reach of these underwater explosions because the sea surface is a very effective muffler. This study helps us understand the problem from the perspective of a sensitive species that may be harmed by the noise. Working with stakeholders in resource management, fishing, and research, we can develop a better understanding of the problem, which will help us find a better way to deter sea lions.”

June 2, 2021 – The COVID-19 pandemic enabled a rare opportunity to measure the relationship between shipping traffic and the marine soundscape.
Oct 1, 2020 – Recordings from MBARI's deep-sea hydrophone show that blue whales mostly sing at night when they are feeding, but are more likely to sing during the daytime when they are migrating.
Sept 8, 2020 – MBARI scientists use sound to track day-to-day changes in the eruption of an underwater volcano.
August 4, 2020 – Using recordings from MBARI’s deep-sea hydrophone, researchers concluded that the sounds of seal-bombs could affect the behavior of harbor porpoises in and around Monterey Bay. 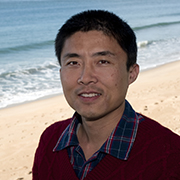