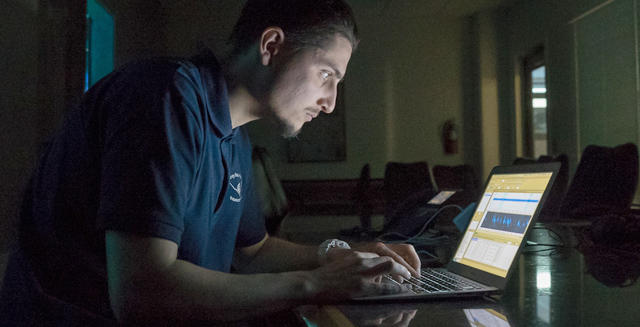 For most students, MBARI’s summer internship program is an exciting opportunity to take a deep dive into the world of ocean research and engineering. But for Daniel DeLeon, an electrical engineering student at California Polytechnic State University in San Luis Obispo, the 10-week internship became much more than that. DeLeon’s research on whale sounds not only opened his eyes to the fascinating world of artificial intelligence and machine learning, it also inspired Google to produce a beautiful video about DeLeon and his work.

Several months in the making, “Daniel and the Sea of Sound,” the five-minute Google video about DeLeon’s work, combines beautiful cinematography with interviews of DeLeon. It also includes interviews with MBARI researchers John Ryan and Danelle Cline.

Ryan is the lead researcher studying sounds recorded by a deep-sea hydrophone attached to the Monterey Accelerated Research System (MARS) cabled observatory, 52 kilometers offshore of Moss Landing and 900 meters below the sea surface. He helped DeLeon design and carry out his summer research project to analyze whale calls picked up by the MARS hydrophone. Cline is the lead engineer on the hydrophone project and helped DeLeon use Google’s TensorFlow machine learning software to automatically identify and extract calls from blue and fin whales from the thousands of hours of audio recorded by the hydrophone.

The newly released video shows how DeLeon overcame many obstacles to become an engineering student, and then found personal inspiration by combining his love of music with a cutting-edge engineering project during his summer internship at MBARI. The video is featured on a Google website and blog entry, as well as on Google’s YouTube channel.