Glow your own: Comb jellies make their own glowing compounds instead of getting them from food 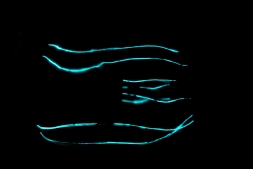 The ctenophore, Mnemiopsis leidyi, can make its own coelenterazine to create this beautiful bioluminescent display. Photo by Manabu Bessho-Uehara.

In the pitch-black environment of the deep sea, light is a precious thing. In fact, making light is essential for the survival of many deep-sea animals. At least nine major groups of deep-sea animals, including jellies, corals, brittle stars, squids, and fish, use the same light-emitting chemical, coelenterazine, to power their displays. Surprisingly, many of these animals can’t actually produce coelenterazine, but must get it by eating other glowing animals.

A new research paper shows that at least two species of comb jellies (ctenophores) are able to make coelenterazine inside their bodies, and thus could provide a source of this chemical for many other denizens of the deep. This discovery will not only help researchers understand the detailed biochemical processes that animals use to create light, but could also provide a new tool for biomedical research.

Because each molecule of coelenterazine can only react once to make light, the chemical is rapidly used up each time an animal glows. This means that the animal must continually replenish its supply of coelenterazine if it wants to keep lighting up.

Even crystal jellies, the animals in which coelenterazine was first identified, do not make their own coelenterazine, but get it by eating copepods and other crustaceans.

Previously, the only marine animals confirmed to make their own coelenterazine were the open-ocean copepod Metridia pacifica and the deep-sea shrimp Systellaspis debilis. Because these animals are not easily available for study and no one has figured out how to grow them in the lab, scientists still don’t know exactly how these animals produce the compound. 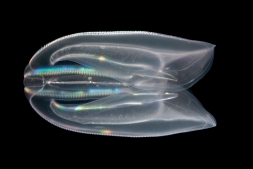 The researchers raised several generations of comb jellies, including Mnemiopsis leidyi, in captivity feeding them only organisms that did not contain coelenterazine. Photo by William Browne.

In order to prove that these comb jellies do not have to get this chemical from their food, the researchers worked with aquarist Wyatt Patry at the Monterey Bay Aquarium and biologist William Browne at the University of Miami, who managed to get these animals to grow and reproduce in captivity.

The researchers raised several generations of comb jellies, feeding them only organisms that did not contain coelenterazine. Even without coelenterazine in their food supply, the comb jellies maintained their ability to glow, and the researchers were able to detect coelenterazine within their bodies. Haddock noted, “Manabu’s experiments gave some of the clearest and most compelling results of any research that I’ve been involved with.”

Looking at a “family tree” highlighting different types of glowing animals, the researchers could tell that the glowing comb jellies, copepods, and shrimp all evolved the ability to produce coelenterazine independently of one another. This shows, once again, how important bioluminescence is for many marine animals.

From an ecological perspective, these findings are significant because they show that the glowing comb jellies could provide coelenterazine to the many other deep-sea animals that eat them.

This research could also have applications outside the realm of marine biology. Because these comb jellies can be successfully grown in captivity, and scientists have already sequenced the genome of Mnemiopsis leidyi, the researchers suggest that this species could be used as a “model animal” to study bioluminescence and coelenterazine production.

Manabu Bessho-Uehara photographs an animal under the microscope in the darkroom on MBARI’s research vessel Western Flyer. Photo by Kyra Schlining.

“We really want to figure out the genes involved in making this molecule,” said Haddock. “It would tell us so much about the evolution of bioluminescence, and could usher in a new generation of biotech tools. Turning these fragile jellies into ‘lab rats’ has enabled experiments that we could never have done a few years ago. I am hopeful this will be the key to solving the mysterious origins of bioluminescence.”

From a practical perspective, if researchers can figure out the exact biochemical processes by which comb jellies produce coelenterazine, they might be able to replicate this process in the laboratory to produce new types of glowing compounds. Such compounds are used extensively in modern biomedical, biochemical, and genomic research, for example, for tracing tumor-forming cells.

“The building blocks of coelenterazine are some of the same amino acids that are found in all living organisms, including humans,” explained Bessho-Uehara. “If we can introduce the genes that produce coelenterazine into living cells of other organisms, we can make parts of these cells glow. This would help us understand how the cells behave, develop, and respond to changing conditions. Such technology would light up the life sciences by overcoming some of the difficulties that we have with current glowing compounds.”

July 13, 2020 – A new research paper shows that some of the most common and iconic deep-sea corals can create their own light.
March 23, 2020 – Humboldt squid communicate with each other using changing patterns of light and dark pigment in their skin.
October 17, 2019 – MBARI researchers recently found that animals living on the deep seafloor are much less likely to produce light than those swimming or drifting in the “midwater.”
July 3, 2019 – Researchers are developing computer models to learn how comb jellies evolved to live at different depths in the ocean.