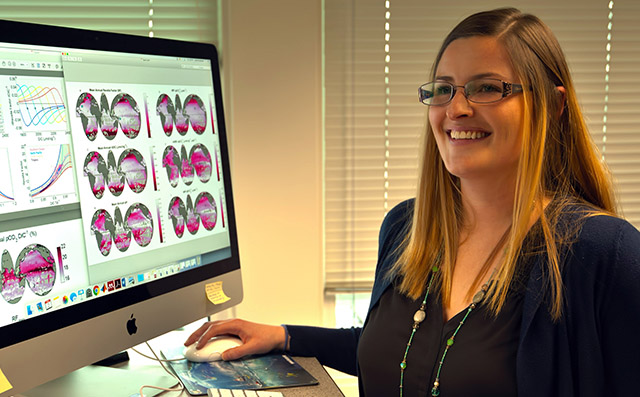 MBARI Marine Chemist Andrea Fassbender recently received an Early Career Scientist Leadership Award from the US Climate Variability and Predictability Program (US CLIVAR). The award was announced during the Fall 2019 meeting of the American Geophysical Union in San Francisco.

CLIVAR is a federally-funded program dedicated to understanding and predicting climate change, with an emphasis on the role of the ocean. The program sponsors a variety of research projects, including field observations and climate modeling. This is the first time that CLIVAR has given out these awards, which consist of a certificate and a $1,000 travel allowance for attending a research conference during 2020. Fassbender was one of nine researchers to receive awards this year.

Fassbender was given the CLIVAR award for her “outstanding work in organizing community activities to synthesize understanding of the interaction between physical and biological processes involved in the ocean uptake of carbon.” Her work at MBARI includes studying marine biogeochemical cycles and their sensitivity to human activities, developing cutting-edge instrumentation for ocean carbon cycle observing, and studying the effects of ocean acidification on marine ecosystems.