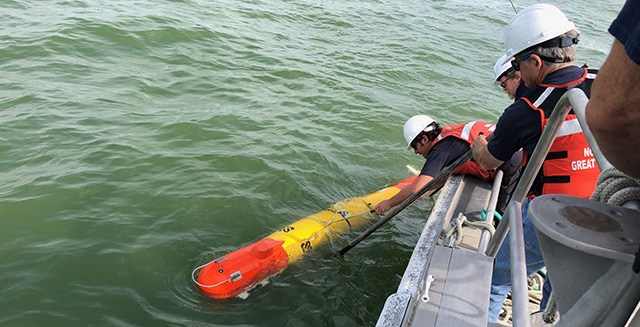 For the third year in a row, the National Oceanic and Atmospheric Administration (NOAA) is using MBARI-designed Environmental Sample Processors (ESPs) to study potentially toxic algal blooms in Lake Erie. This experiment is part of a continuing effort by NOAA to find ways to monitor and forecast algal blooms that affect the drinking water supply for millions of people.

In 2017, MBARI engineers deployed a garbage-can-sized second-generation ESP (2G-ESP) near the water-supply intake for Toledo, Ohio. Since that time, the instrument has been used seasonally to monitor concentrations of microcystin—a highly toxic compound produced by small blue-green algae (cyanobacteria) in the genus Microcystis. These algae thrive in warm, nutrient-rich water, which is commonly found in Lake Erie in the summer and early fall—the time of year when the 2G-ESP has proven most useful.

In 2018, NOAA supplemented the fixed, second-generation ESP with a much smaller third-generation ESP (3G-ESP) carried within an underwater robot. The robot, one of MBARI’s long-range autonomous underwater vehicles (LRAUVs), swam around the lake, measuring concentrations of algae and microcystin over large areas. The 2018 test in Lake Erie was the first time the new ESP sensor was used in a coordinated field study.

“The ability to measure algal toxins ‘on the fly’ using autonomous vehicles is a game changer for researchers and resource managers,” said Chris Scholin, MBARI’s president and CEO. “Lake Erie and Monterey Bay are the only places in the world where this has been attempted so far.”

This year the NOAA/MBARI research team has expanded their field tests, deploying two LRAUVs at the same time. One of the LRAUVs carries standard oceanographic instruments that measure water temperature, depth, and chlorophyll (an indicator of algal blooms). This robot is helping scientists find patches of water with high concentrations of algae. 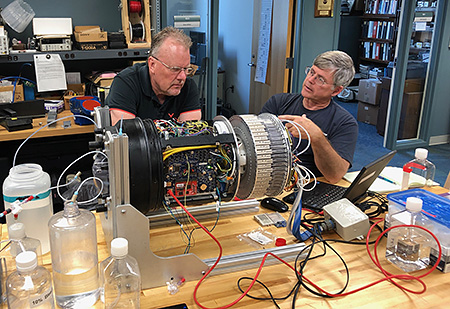 Greg Doucette of NOAA (left) and MBARI Senior Research Specialist Bill Ussler (right) examine the internal workings of a third-generation Environmental Sample Processor. This complex robotic laboratory was inserted into the cylindrical hull of a long-range AUV, which was then deployed in Lake Erie. Image: Jim Birch © 2019 MBARI

The second LRAUV carries the same standard instruments as the first, but also a third-generation ESP, which measures concentrations of microcystin in real-time as the LRAUV cruises around the lake. The 3G-ESP also collects samples of water and algae that will be analyzed back in the lab. This will help scientists understand how the real-time toxin detection system is working, as well as how the genetic characteristics of the algae relate to their production of microcystin.

The courses of the two LRAUVs are being coordinated, so if one LRAUV finds high concentrations of algae, the second LRAUV can be sent to the same area to find out if the algae are toxic. The second LRAUV will also visit the site of the 2G-ESP, as well as areas that are being manually sampled by NOAA scientists, allowing researchers to compare samples collected by the 3G-ESP with those collected by the 2G-ESP and by hand.

To get a big-picture view of Lake Erie, NOAA will also fly a light plane over the lake to collect hyperspectral images, which are like photos taken using dozens or hundreds of different wavelengths of light. The plane will fly beneath the clouds that often obscure satellite views of the lake. The resulting images will be combined with data from the LRAUVs to help researchers learn about the horizontal and vertical distribution of the algae, as well as the condition of the algae. 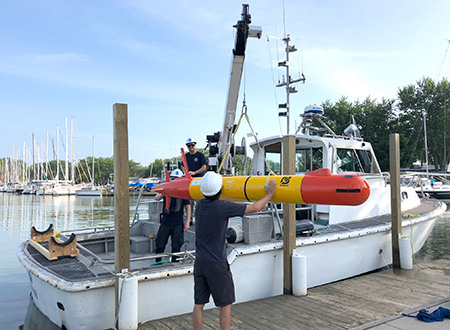 By combining  all this information with data on water temperature, nutrient concentrations, and wind conditions, scientists and resource managers hope to learn more about the factors that lead to toxic blooms. This will improve NOAA’s forecasts of when such blooms are likely to occur.

Results of the tests will also be used to improve the design and performance of the 3G-ESP system, and to develop methods for visualizing the information from the LRAUV/ESP to meet the needs of water-quality managers and others.

Eventually, NOAA hopes to make the LRAUVs and ESPs a permanent part of their monitoring and forecasting system for harmful algal blooms in the Great Lakes.

“Testing the building blocks of such a system are a critical part of attaining that goal,” Scholin said. “The experience gained during these tests will be essential for guiding the team’s future work.”

“There’s no substitute for getting new technologies out in the field under ‘real world’ conditions, to find out what works and what doesn’t,” Scholin added. “This is an iterative process.  Having the opportunity to do that work alongside our NOAA partners is invaluable.” 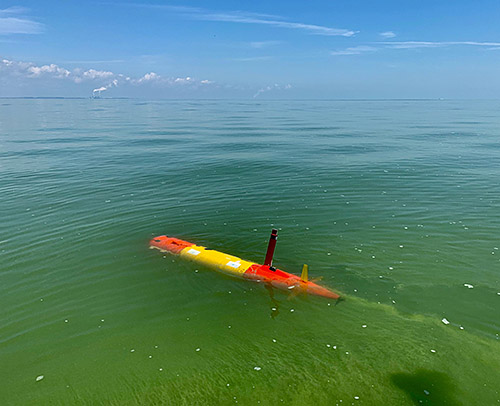 “The lessons learned during this experiment will help NOAA define the operational requirements that will guide MBARI’s development of the instrument,” added Kelly Goodwin, a NOAA researcher working on the project. “The result will be a nimble tool that can navigate the shallow waters of the lake 24/7, even at night or in foul weather.”

“We are always looking for ways to improve our understanding of harmful algal blooms in the Great Lakes. Having the ability to continuously detect and report on these blooms would be a big boost to our efforts,” said Debbie Lee, director of NOAA’s Great Lakes Environmental Research Laboratory (GLERL). “Harmful algal blooms have a big impact on Great Lakes residents, and by teaming up with MBARI to advance technological innovations of these AUVs, we’re working to protect lives here in the Great Lakes and beyond.”