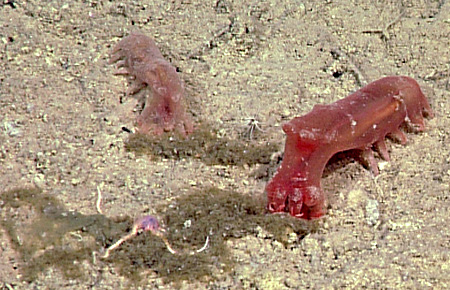 The muddy abyssal plains, which cover much of the seafloor (and a good portion of the Earth’s surface for that matter), are perennially dark and cold, and there’s usually not much for animals to eat. However exceptionally large pulses of food may reach the deep seafloor every decade or two. A recent paper by Crissy Huffard and other MBARI researchers shows that one particular group of sea cucumbers may experience population booms following these deep-sea “feasts.”

This study was conducted at Station M, a long-term research site on the abyssal plain about 220 kilometers (137 miles) west of the Central California coast. MBARI marine ecologist Ken Smith has been studying this site for nearly three decades. For the latest study, researchers analyzed video collected during Smith’s remotely operated vehicle (ROV) dives at Station M from 2006 to 2014.

The research was an outgrowth of a 2013 summer intern project by Larissa Lemon, working with MBARI benthic ecologist Linda Kuhnz. “Linda and Larissa analyzed dozens of hours of dive videos, identifying and estimating the size of every individual sea cucumber,” said Huffard. “This allowed us to estimate how populations of 19 different species of sea cucumbers changed over time.” 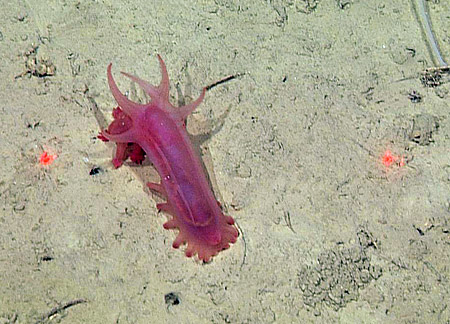 Close up view of a Peniagone sea cucumber at Station M. The red dots, about 29 cm (1 foot) apart, are used to estimate the sizes of animals. Image: (c) 2011 MBARI

Shuffling slowly across the deep seafloor, sea cucumbers eat mud containing bits of decomposing algae, animals, and other debris that sink down to the seafloor from the sunlit surface waters. For most of the 1990s and 2000s, food was in short supply at Station M, and there were relatively few sea cucumbers. In fact, from 2006 to 2009, during the early part of this study, sponges were the most abundant seafloor animals at Station M.

Starting in 2011, however, animals at Station M received a series of “feasts.” Microscopic algae bloomed in huge numbers at the surface, then died and sank rapidly to the seafloor. During some of these blooms, gelatinous animals called salps gorged themselves on the drifting algae. After they had eaten up all the algae, the salps themselves died and sank to the bottom. Because the algae and salps sank so rapidly, their bodies arrived at the seafloor fresh and full of nutrients instead of being eaten or decomposing on the way down.

The result of all this fresh food was a major change in the entire biological community, including a drop in the number of sponges and a massive increase in the number of sea cucumbers, as documented in a 2014 paper by Kuhnz and others. “These were record-breaking events in the 25-plus years of research at Station M,” said Huffard.

The biggest pulses of food occurred between March and August of 2012, when the seafloor was repeatedly covered with the remains of algae and salps. Later, during their November 2012 ROV dive, the researchers observed lots of sea cucumbers crawling around, eating the remains of this feast. 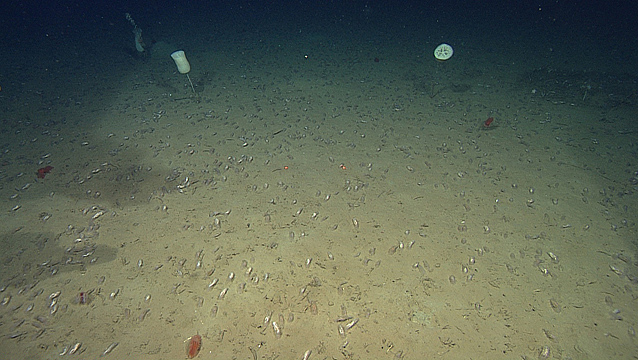 Large numbers of sea cucumbers covered the seafloor at Station M in November 2012. The white objects in the background are stalked sponges. Image (c) 2012 MBARI

Huffard’s analysis showed that, following the food pulses, there were dramatic increases in the number of small individuals of a few species of sea cucumbers. This suggested to Huffard that the food pulses allowed these species to reproduce like crazy. “It could be that certain species require the nutrients in fresh phytoplankton, and do really well in periods like we’ve had during the past few years,” she said.

The researchers also saw rapid increases in the numbers of large sea cucumbers of some species. This may be evidence that adult sea cucumbers of these species were migrating into the study area to take advantage of the food. Where these animals might have come from is still an open question.

Whether due to reproduction or migration, the data clearly showed that a few species of sea cucumbers became thousands of times more abundant following food pulses. “Previous researchers have noted that deep-sea sea cucumbers and other animals respond to surface events,” Huffard said. “In this case, ten species of cucumbers responded to high food supply by increasing their densities. But eight of those ten species were all in one particular family [Elpidiidae]. So rather than a general increase, we’re talking about a huge response by just one group of sea cucumbers.” 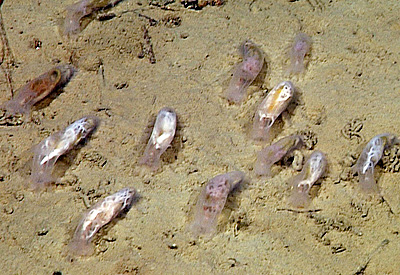 Close up of a “herd” of sea cucumbers on the seafloor at Station M in November 2012. The animals are oriented with their heads and feeding tentacles toward the lower left. Image (c) 2012 MBARI

She continued, “We don’t know their life spans. We don’t know much about how they reproduce. There are so many things we don’t know about the natural history of sea cucumbers! But this paper has helped us identify new areas where we really need to focus to fill the gaps.”

Huffard also noted that these findings have implications for studies of human impact in the deep sea. “When people talk about threats to the deep seafloor, for example from deep-sea mining, many of those studies consider a baseline condition that is relatively static. They consider the abyssal community to be relatively unchanging over time. But here’s an example where perfectly natural events were correlated with enormous changes in the seafloor community.”

November 3, 2021 – A robotic rover has provided long-term data about deep-sea carbon cycling and climate change.
December 10, 2020 – At least nine major groups of deep-sea animals, including jellies, corals, brittle stars, squids, and fish, use the same light-emitting chemical, coelenterazine, to power their displays.
December 7, 2020 – MBARI scientists confirm the first evidence of bioluminescence in a sponge, showing that the sponges contain the chemicals necessary to make light within their bodies.