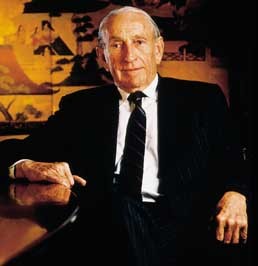 David Packard was born in 1912 in Pueblo, Colorado. He showed an early interest in science and engineering, and in high school excelled in schoolwork, sports, and leadership. In 1930 Packard enrolled at Stanford University and majored in electrical engineering. It was there that he met Bill Hewlett, with whom he shared dreams of someday starting a business. In 1939 they began building custom electronic equipment in a one-car garage in Palo Alto, and named their new company Hewlett-Packard. In 1947 HP was incorporated. In 1989, that small garage on Addison Avenue was declared a historical landmark as the “birthplace of Silicon Valley.”

By the 1950s Packard and Hewlett had established a tradition of philanthropy, but it was not until several decades later that the oceans became a primary focus for Packard’s attention. His daughters Nancy Burnett and Julie Packard deserve the credit for getting him interested in marine science. Both studied marine biology in graduate school and were among the first to suggest that the Packard family build an aquarium like no other, with marine creatures displayed in their natural habits, to “inspire conservation of the oceans.” Thus in 1984, the Monterey Bay Aquarium was born. In 1986, Packard convened a blue-ribbon panel of oceanographers to discuss the rationale for establishing a research institution on the shores of Monterey Bay.

In May of 1987, the Monterey Bay Aquarium Research Institute was incorporated independent from the Aquarium with a broad mandate for cutting-edge research and development in oceanography. MBARI was tasked with applying three new areas of technology to exploration of the oceans: remotely operated vehicles (ROVs), advanced instrumentation, and computers. Packard advocated sending instruments to sea, not people. He encouraged instrumentation that would return information, not samples to shore. Thus demonstrating the utility to ocean research of ROVs equipped with high-quality cameras and a suite of in situ sensors became the first assignment for the young institution.

In his own words, MBARI was to “Take risks. Ask big questions. Don’t be afraid to make mistakes; if you don’t make mistakes, you’re not reaching far enough.”

Excerpted from: “How One Man Made a Difference: David Packard,” a February 2000 talk by MBARI President and CEO Marcia McNutt chronicling Packard’s life from his boyhood in Pueblo, Colorado to becoming the greatest private benefactor for oceanography.

Among the top achievements of MBARI's first 20 years were the development of the remotely operated vehicle Tiburon, discoveries about the importance of gelatinous animals in deep-ocean ecosystem, and experiments on the impact of sequestering carbon dioxide in the deep sea, See all of the top 20 achievements.
In 1997, the institute took a look back at its formative first 10 years, producing a 76-page retrospective. The full publication is online as a PDF document.