Cannibalism in the deep sea

In the depths of the deep sea a squid has captured a much-needed meal with two specialized feeding tentacles bearing suckers and large hooks. The hooks allow the squid to secure prey that can sometimes be larger than themselves, but the downside of wrestling with a meal this large is that the squid cannot swim away from the approaching lights of a remotely operated vehicle (ROV). Nearly 1,000 meters above on the research ship, scientists watch a live video feed from the ROV’s camera. Like any observations in nature, they never know what they will find, so when an opportunity presents itself, it is filmed, annotated, and added to the MBARI video archive. With the vehicle hovering a few meters away from the preoccupied squid, the scientists use the camera’s telephoto lens to zoom in. What they find is a Gonatus squid, and what it has in its grasp is apparently another squid of the very same species. 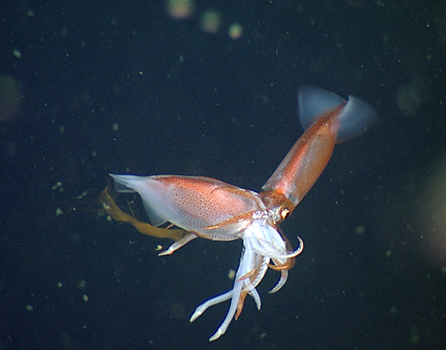 Cannibalism is not so unusual in the deep sea, especially for squid, but until recently the diet of Gonatus squid was largely unknown. By using ROVs to make observations of these squid in their natural habitat, scientists now know a great deal more about their feeding behavior. A recent paper by Henk-Jan Hoving and Bruce Robison reveals that the diet of the two similar Gonatus squid species—Gonatus onyx and Gonatus berryi—have a higher than expected incidence of cannibalism. Hoving is a former MBARI postdoctoral fellow and is now with the Helmholtz Center for Ocean Research Kiel, Germany; Robison is an MBARI senior scientist and midwater ecologist.

Two decades of video annotations were analyzed to reach the results of this paper. Many Gonatus squid were seen consuming deep-sea fishes such as lanternfish and owlfish, but many were captured on camera in the midst of eating another of their own kind. In each situation food was obviously more important than relinquishing their meal to escape the bright lights of the ROV. 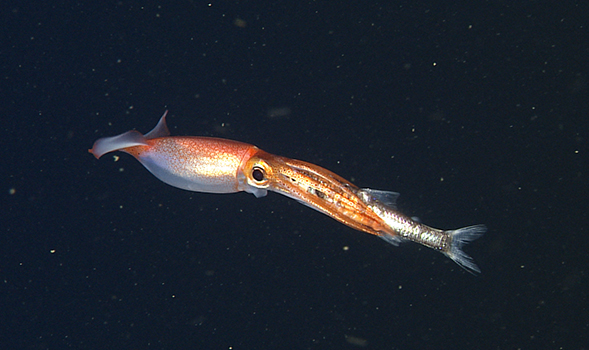 Hoving and Robison suggest several reasons for this high incidence of cannibalism. Gonatus squid grow rapidly, are active swimmers, and have among the highest metabolism of all cephalopods (octopus, squid, cuttlefish, and nautilus). They only spawn once in their lifetimes, and after the female successfully broods her single batch of eggs, she dies. For these reasons Gonatus squid are voracious eaters. Their cannibalistic behavior may also be a strategy to reduce competition for food and mates.

Gonatus females, in particular, have a high nutritional need because they brood their young by carrying approximately 2,000 to 3,000 eggs in a sheath between their arms for as long as nine months. During this time they are unable to feed and must rely on stored fats from previous meals. This observation of the first known parental care behavior by squid was also an important discovery made possible by the use of ROVs.

To study the diet of deep-sea squid without an ROV, scientists relied on the stomach contents of the squid they captured in trawl nets or from jigging­­­­­­­—a method of using lights to attract squid to the boat in high concentrations, then catching them by deploying a line with hooked lures (jigs). Both trawling and jigging create stress-induced, unnatural feeding behavior by forcing many animals into a small, confined space. These situations often result in cannibalism in many species.

A direct way to know what a deep-sea species eats is to observe them feeding in their natural environment. To do so requires a vehicle that can withstand the immense pressure at depth, but there are also some drawbacks of using an ROV. Hoving and Robison concede in their paper that the vehicle’s lights and noise may cause some disturbance in natural behavior. However, after viewing 109 predator/prey pairs of Gonatus from 1995 to 2015 they were able to determine in most cases that the capture of prey took place prior to the arrival of the ROV. The advantages of this approach outweigh the disadvantages, and to have a degree of understanding about the natural behavior of an important species in oceanic food webs is far better than to know nothing at all. 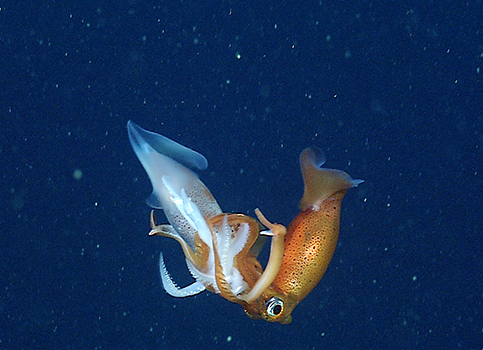 The ROVs enable scientists to observe the natural behaviors of a species in an otherwise impossible-to-reach environment. MBARI researchers were able to deduce subtle differences in the eating habits between G. onyx and G. berryi. Gonatus onyx was not observed feeding on G. berryi, but G. berryi fed on G. onyx. Cannibalism was common in both species, but G. onyx did so at a higher rate. Both species also appeared to have different tastes in deep-sea fish species.

The diet of gonatid squid is important to understand because, in some parts of the North Pacific, they may be more abundant than commercial fish species. Gonatus onyx is the most abundant species of this genus off California. This prevalence of G. onyx has positioned it and other Gonatus species as important prey items for many regional oceanic species. Learning about the diet of Gonatus squid enables scientists to better understand the structure of oceanic food webs and the flow of nutrients throughout North Pacific ecosystems.

MBARI video of one Gonatus squid eating another:

The MBARI video below shows how a Gonatus onyx squid can capture large prey.