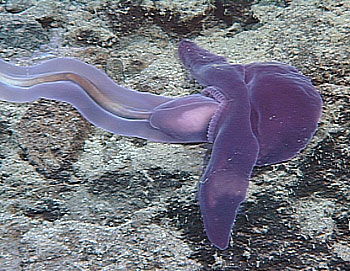 This large, purple acorn worm can grow to over 30 centimeters (1 foot) long, and was videotaped about 3,000 meters below the surface near the Hawaiian islands. It uses its large, fleshy “lips” to feed on a thin layer of sediment that collects on deep-sea lava flows. Image: © 2001 MBARI.

What’s slimy, comes in a variety of colors, and leaves sinuous trails of sediment on the deep seafloor? If you guessed “a worm,” you’d be close. These creatures are known as acorn worms. But they are more closely related to humans than they are to other worms.

Acorn worms have historically been thought of as shallow-water animals that live in burrows in seafloor mud. Only four species were known to live in deep water. However, a recent paper by MBARI collaborator Karen Osborn, MBARI marine biologist Linda Kuhnz, and several coauthors, shows that acorn worms are found in deep-ocean environments around the world. The paper introduces at least 13 new species of these intriguing animals.

Acorn worms are known to biologists as “enteropneusts” (pronounced ‘entero-noosts’—the ‘p’ is silent). They belong to a small group of animals known as the hemichordates, which are closely related to the chordates (animals with backbones). Acorn worms have no bones, no eyes, and no brain. Their bodies have three main parts—a long, worm-like trunk, a wide collar that surrounds a mouth, and a large proboscis that fills the mouth and extends, tongue-like, beyond it. Most acorn worms use their mouths and proboscises to slurp up sediment and debris that has settled on the seafloor. 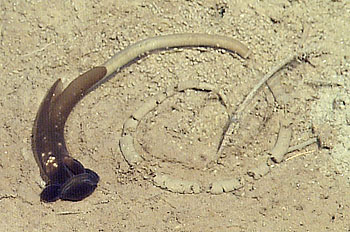 This 15-centimeter (6-inch) long acorn worm (Tergivelum baldwinae) is one of only four species of acorn worms known to science before the publication of the recent paper. Like many deep-sea acorn worms, this animal crawls over the surface of of the mud, ingesting sediment, and leaving behind a sinuous “fecal trail.” This particular animal was videotaped in about 4,000 meters of water at “Station M,” 220 kilometers (140 miles) off the Central California coast. Image: © 2007 MBARI

Marine biologists know very little about deep-sea acorn worms. In part this is because acorn worms’ bodies are so soft and gelatinous that they are usually destroyed by the dredges and other collection tools used to study deep seafloor animals. Only in the last decade or two have scientists been able to use remotely operated vehicles to explore the deep sea and collect such soft-bodied animals using less invasive methods.

In preparing the recent paper, Osborn (a research zoologist at the Smithsonian Institution) worked closely with Kuhnz, who examined almost 500 video clips of acorn worms taken by MBARI’s remotely operated vehicles over the past 23 years. Osborn also worked with researchers from the United States, England, Russia, and Japan to incorporate their observations of these animals. Based on photographs, videos, and collected samples, Osborn and her coauthors tentatively identified at least nine and perhaps as many as 16 new species of deep-sea acorn worms.

The researchers used DNA analysis to identify some of the new species. They also created a new “family tree” showing the genetic relationships between all the different groups of acorn worms. This genetic analysis suggests that the deep-sea acorn worms evolved from species that lived in shallow water. 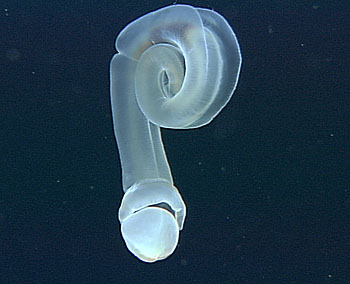 This photo shows a new species of acorn worm that was discovered drifting in Monterey Canyon, about 3,500 meters below the ocean surface and more than a dozen meters above the seafloor. The animal has coiled its body in a spiral, a posture observed in other small, drifting deep-sea animals. Image: ©: 2003 MBARI.

Over millions of years, acorn worms in the deep sea have evolved some very different behaviors from those living in shallow water. For example, shallow-water acorn worms spend almost all their time in burrows within the sediment. They rarely leave their burrows, but extend their proboscises out of their burrows to feed. Most of their deep-sea relatives, however, live on top of the seafloor sediment. With their soft, weak bodies, many deep-sea acorn worms do not seem to be able burrow at all.

One of the most surprising findings of the recent study was that some deep-sea acorn worms have developed the ability to move from place to place by drifting with the ocean currents. “I wouldn’t call what they do swimming so much as controlled drifting,” says Osborn. The researchers observed one type of acorn worm drifting in the water about 20 meters (65 feet) above the seafloor. 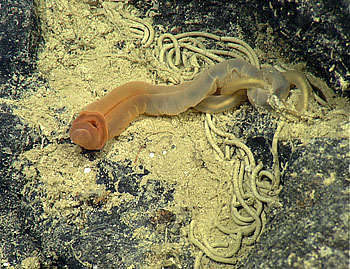 This orange acorn worm was photographed on Taney Seamount, off the coast of Northern California, at a depth of about 3,000 meters. Image: © 2010 MBARI.

The researchers speculate that when the acorn worms’ guts are empty, the animals become slightly buoyant. The acorn worms may also bend their bodies in certain ways and create “balloons” of mucus that could help them lift off the bottom and remain suspended in the water. This allows them to be carried by deep-ocean currents to new locations that may have relatively abundant food.

Several of the new species of acorn worms have very wide “lips,” which apparently help them vacuum up the thin layers of mud that collect on underwater lava flows. Other species prefer to live on the flat muddy abyssal plains that make up much of the deep seafloor.

The deep-sea acorn worms also come in a bewildering array of shapes and colors. This is unlike their shallow-water relatives, some of which researchers can only tell apart using a microscope to examine small, internal body parts.

The researchers observed acorn worms in deep parts of both the Pacific and Atlantic oceans. However, as they point out, “As with most deep-sea animal distributions, it is not possible to define complete geographical ranges because so little area of the deep seafloor has been surveyed.”

Despite the fact that they have just tripled the number of known deep-sea acorn worms, the researchers know that they still have much to learn. As they write in their recent paper, “We have only scratched the surface of deep-sea enteropneust diversity.”

Scientists studying a whale carcass in Monterey Canyon recently announced the discovery of two new species of unique worms that feed on the bones of dead whales.
It sounds like a junior high school riddle—"What lives 3,000 feet below the ocean surface, is about the size of a marble, and looks like the back side of a pig?" MBARI biologist Karen Osborn and her colleagues recently came up with an answer to this riddle by combining modern DNA analysis with traditional methods of scientific observation.
Deep-sea worms have evolved an amazing array of body types and survival strategies. The latest addition to this collection of oddities is a group of swimming worms with small oval sacs of fluid hanging from their bodies, just behind their heads.