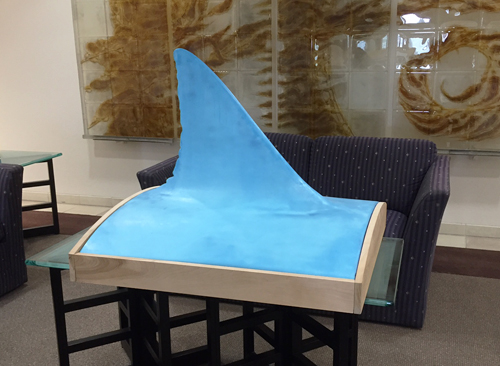 Engineer Thom Maughan created a lot of buzz at MBARI when he left a blue fiberglass shark fin in the upstairs lobby. Many staff members, perplexed about its purpose, thought it was a new art piece. While it is beautifully crafted and painted, the shark fin is intended as a research tool in a shark tagging project. Maughan and Sal Jorgensen, a shark researcher at the Monterey Bay Aquarium, are leading a project team that aims to build a video-capable animal tag to place on great white sharks. These sharks have a yearly migration from California to Hawaii and back. On their way to Hawaii, the sharks make a pit stop about halfway for several weeks. The video-recording tags will attempt to find out if the sharks are mating or feeding at their stop. The fiberglass shark fin will allow the project team to build models based on its design and test the clamps used to attach tags onto sharks. The shark fin was built by an artist at the Monterey Bay Aquarium. Read more about this project at: https://www.mbari.org/technology/emerging-current-tools/video/shark-cafe-camera/. 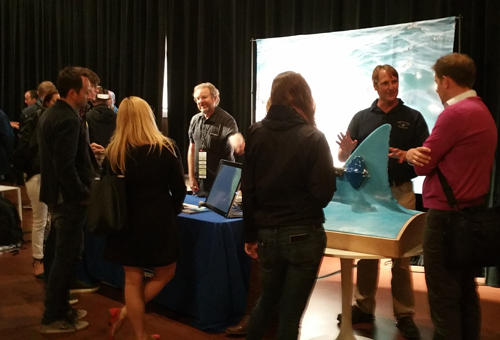 Thom Maughan, second from right, recently displayed the shark fin at a booth at the EG10 conference at the Sunset Center in Carmel, CA.