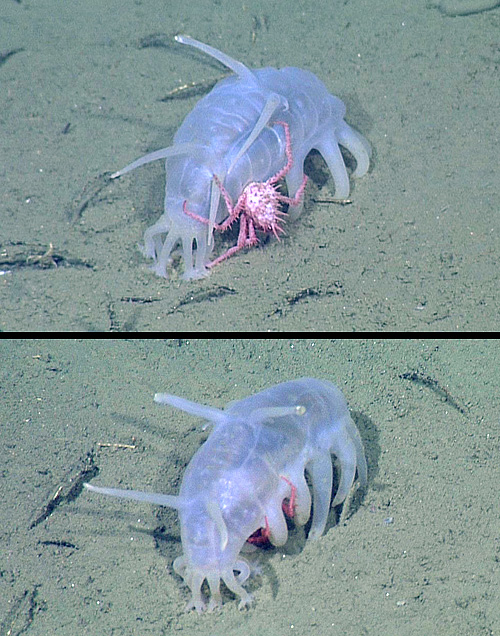 Juvenile king crabs sometimes crawl around on the sides of Scotoplanes sea cucumbers, but more often hide beneath them, as shown in the lower image. Photo: © 2011 MBARI

Flat, muddy plains cover much of the deep seafloor. In such areas, animals that can’t burrow into the mud have nowhere to hide. In a recent research paper, scientists from MBARI and the Monterey Bay National Marine Sanctuary showed that some juvenile king crabs have evolved a unique solution to this problem—they hitch rides on wandering sea cucumbers. The researchers speculate that this may help the young crabs evade predators.

In many deep seafloor areas, the only objects that extend more than a centimeter or two above the mud are deep-sea animals. Some of the most common seafloor animals offshore of Monterey Bay are sea cucumbers (holothurians) in the genus Scotoplanes, commonly known as “sea pigs.” Sea pigs crawl slowly across the mud using foot-like protrusions from their tubular bodies. Like most sea cucumbers, they eat seafloor mud and detritus—bits of dead algae and animals that sink down from the surface waters to the deep sea. In deep seafloor areas off Monterey Bay, sea pigs are typically between four and 15 centimeters (1.5 and six inches) long.

In March 2011, marine biologists from MBARI and the Monterey Bay National Marine Sanctuary used MBARI’s remotely operated vehicle (ROV) Doc Ricketts to study life around a sunken shipping container just offshore of Monterey Bay. During their ROV dives, the researchers were amused to see small crabs riding on the backs or clinging to the bellies of many sea pigs.

Following up on this observation, the researchers searched for an association between crabs and sea cucumbers in other areas by reviewing video collected from soft-sediment areas near Monterey Bay and in rocky areas near Sur Ridge off the Big Sur coast.

All in all, the researchers examined about 2,600 sea cucumbers and found that almost one quarter of them carried crabs. Virtually all of the crabs were juveniles of a species of king crab called Neolithodes diomedeae. Although classified as a king crab, adult N. diomedeae grow to only about 18 centimeters (seven inches) across. The juveniles in this study were much smaller—averaging only 1.4 centimeters (one-half inch) across) 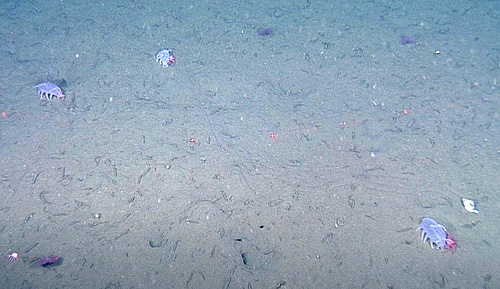 This photograph of the muddy seafloor offshore of Monterey Bay shows three Scotoplanes sea cucumbers, at least two of which are host to juvenile king crabs. Photo: © 2011 MBARI

The researchers were surprised to discover that virtually all (96 percent) of the juvenile Neolithodes crabs they saw in deep muddy-bottom areas were clinging to sea pigs. They noted how hard it was to see the tiny crabs clinging to the undersides of the sea pigs. As they wrote in their paper in Marine Ecology, “The small size and reclusive behavior of juvenile Neolithodes diomedeae often obscured them from view beneath Scotoplanes.” This suggests that the crabs’ predators may also have a difficult time finding them.

When the researchers looked for juvenile king crabs in rocky portions of Sur Ridge, they didn’t find them living on sea cucumbers, but hiding among rocks or corals. The only place where juvenile crabs were riding on Scotoplanes were, as they put it, “in heavily sedimented areas where Scotoplanes was the largest benthic structure available as shelter.”

A wide variety of animals, including snails, flatworms, crabs, and even small fish, are known to live on or inside the bodies of sea cucumbers. Although the benefit for the “guest” animal is often apparent, scientists have a harder time determining if the sea cucumber gets anything out of this relationship. 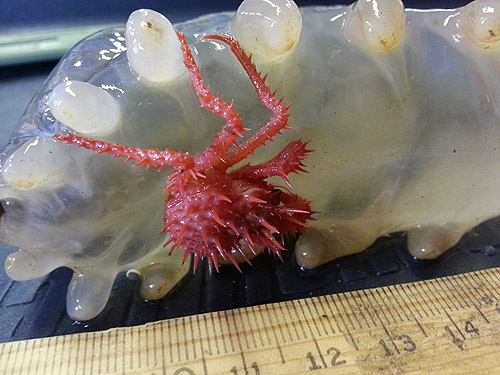 This juvenile king crab was photographed on board one of MBARI’s research vessels. It is still holding onto its host sea cucumber, despite the long ROV ride to the surface. Photo: Josi Taylor © 2011 MBARI

In this case, the researchers speculate that the young crabs were using the sea cucumbers as protection from predators, such as deep-sea fish. Young crabs are especially vulnerable because they must molt (shed their shell) frequently in order to grow larger. After molting, their new shell is soft for a short period when they are particularly vulnerable to being eaten by predators, or even cannibalized by larger members of their own species.

Life in the deep sea is challenging, especially for young animals with nowhere to hide. The recent paper illustrates how deep-sea animals may rely on one another in novel and unexpected ways. For example, these findings suggest that any activity, such as bottom trawling, that disturbs populations of sea pigs off Monterey Bay could also affect the survival of juvenile king crabs.