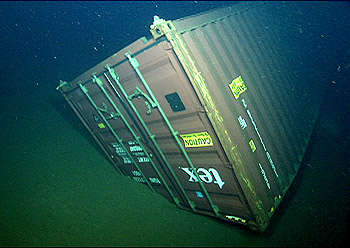 This shipping container was discovered upside down on the seafloor by MBARI researchers in June 2004, four months after it was lost at sea. Researchers will revisit this site during the upcoming cruise. Image: © 2004 MBARI

Each year, an estimated 10,000 shipping containers fall off container ships at sea. Although many of these containers float at the surface for months, most eventually sink to the seafloor. No one knows what happens to these containers once they reach the deep seafloor.

From March 8 to March 10 2011, a team of researchers from MBARI and the Monterey Bay National Marine Sanctuary (MBNMS) will use a robotic submarine to study the biological impacts of a shipping container resting on the seafloor about 20 kilometers (12 miles) outside of Monterey Bay (but still within the boundaries of the sanctuary).

MBARI researchers first discovered this lost container at a depth of about 1,300 meters (4,200 feet) during a marine biology dive in June 2004. Video from MBARI’s submersible clearly showed serial numbers on the side of this container. Sanctuary staff sent these numbers to the U.S. customs agency, which was able to identify the ship that had originally carried the container.

The merchant vessel Med Taipei left San Francisco on February 25, 2004, in the middle of a winter storm. As the ship steamed south toward the Port of Los Angeles, it began rolling violently in seven- to nine-meter (23- to 30-foot) swells. In a rush to get his goods to port, the captain continued southward at high speed, despite the rolls. Unbeknownst to the captain and crew, the containers on their ship had been stacked incorrectly, with massive, heavy containers perched on top of lighter ones.

Shortly after midnight on February 26, when the Med Taipei was directly offshore of Monterey Bay, stacks of containers began to break free of their lashings and topple sideways. Fifteen of the 40-foot-long containers fell overboard into the churning sea. Yet the ship continued south. By the time the ship reached the Port of Los Angeles, nine more containers had fallen overboard, and another 21 lay crumpled on deck. 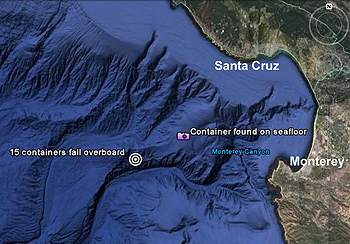 This map shows the reported position of the container ship Med Taipei when it lost lost 15 containers overboard on February 26, 2004. It also shows where one of these containers landed on the seafloor, just outside of Monterey Bay. Image: MBARI/Google Earth

You would have thought a disaster like this would have made the national news. But no one was hurt, and there is no legal requirement for shipping companies to report such losses. No government officials knew about this debacle except perhaps a few customs inspectors.

Following up on MBARI’s discovery, sanctuary staff investigated the potential for recovering the other missing 14 containers. However, they soon discovered that it was unlikely that the additional containers would ever be located, and the cost and time involved in recovering them would have been prohibitive. On July 26, 2006, after a significant legal effort, the shipping company agreed to pay the National Oceanic and Atmospheric Administration $3.25 million to settle claims relating to the lost containers. Money from this settlement is being used to fund the upcoming research dives.

Leading the dives are Andrew DeVogelaere, research coordinator at the MBNMS, and James Barry, a senior scientist at MBARI. Using MBARI’s research vessel Western Flyer and the remotely operated vehicle Doc Ricketts, the team will take a close look at the container itself, as well as the seafloor around the container.

This motley list underscores the fact that much of the everyday merchandise we buy in stores has been shipped to the U.S. by container ship. Approximately 90 percent of worldwide non-bulk cargo travels by container ship, and between five and six million containers are in transit at any given moment. To make matters worse, not all container cargo is inert. Perhaps 10 percent of shipping containers carry household and industrial chemicals that could be toxic to marine life.

Over the last five years, the number of containers lost at sea has increased dramatically. This trend is likely to continue as new container ships are being built twice as large as existing ones. Yet tie-down technology and lax monitoring of container weights and stacking procedures have not changed significantly.

The upcoming expedition will provide a snapshot of what is essentially a worldwide problem. When shipping containers are lost at sea, they endanger other craft, cost considerable time and money, and sometimes pose hazards to marine life. According to DeVogelaere, “As these containers drop to the bottom of the sea, they form deep-water stepping stones between ports, highways of debris, if you will. I hope that this cruise will help expand the public’s thinking about human impacts in the deep sea.”