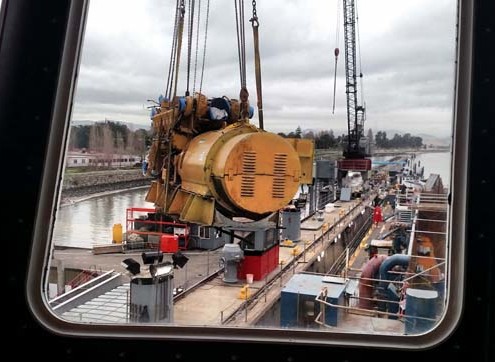 View from the bridge of the engine being lifted away from the Western Flyer. Image: Erik Larson

MBARI research vessel Western Flyer spent the first few months of 2016 in dry dock at a shipyard in Alameda, California, while two of its engines were rebuilt as part of their scheduled service. 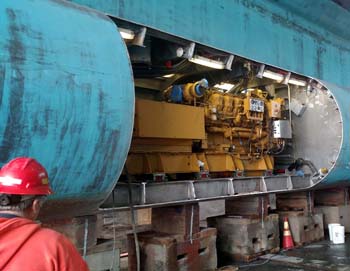 A large hole was cut in the ship’s hull to gain access to the engine. Image: Erik Larson

In order to access the engines, the shipyard cut two six-meter-by-three-meter (20-foot-by-10-foot) sections out of the hull, exposing the engines and the engine room. A two-wheel track rail supported with blocks was set up and each 11-metric-ton (24,000-pound) engine was jacked up and placed onto the track wheels. The engines were then pulled out of their spaces toward the center line of the ship where a heavy-duty cart awaited. The engines were again jacked up, the rails were removed, then the engines were lowered back onto the cart.

The cart was pulled forward and each engine was prepped to be lifted by the onshore crane. The crane lifted each engine through a narrow clearance between the Western Flyer and a nearby dredge barge sharing the dry dock. The engines were then staged on land and loaded onto two separate trucks bound for the manufacturer’s repair facility in nearby Oakland for top-end rebuilds. 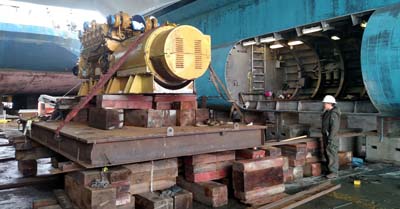 Once removed from the hull, the engine was placed on a cart to be moved out from under the ship. Image: Erik Larson

Additionally, the propellers, shafts, rudders, and all stabilizers were removed from the ship and serviced. The hull was blasted to bare metal for the first time since the ship was built and new paint applied.

The vessel resumed operations out of Moss Landing in April, 2016. 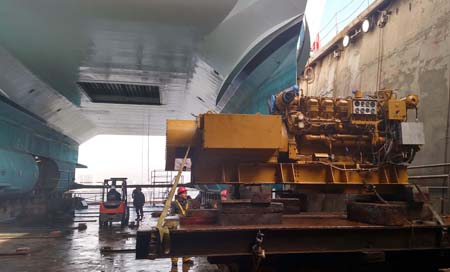 One of the Western Flyer’s engines ready to be lifted by crane. Image: Erik Larson