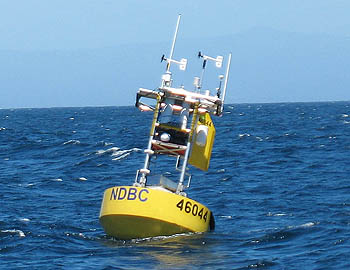 This photograph shows the new MBARI / NDBC / CeNCOOS buoy floating in the open ocean about 30 miles west of Monterey Bay. The yellow float is about two meters (six feet) across.

In late May of 2011, MBARI and the National Oceanic Atmospheric Administration’s (NOAA) National Data Buoy Center (NDBC) installed a new ocean-monitoring buoy about 30 miles offshore of Monterey Bay. This collaborative effort, brokered by the Central and Northern California Ocean Observing System (CeNCOOS), could pave the way for similar buoys maintained by NDBC around the country, providing a wealth of new scientific information. The new buoy may replace two existing buoys in the same area, reducing costs to both MBARI and the NDBC.

In 1987, the NDBC installed a deep-water buoy (“buoy 46042”) about 30 miles west of Monterey Bay. The buoy was designed to support National Weather Service forecasts and warnings, as well as weather and climate modeling. 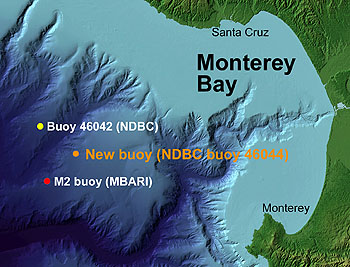 This illustration shows the locations of the existing MBARI and NDBC buoys, along with the recently installed hybrid buoy, which may eventually replace them.

Both buoys have provided decades of essential data for commercial and recreational users of the ocean, as well as for meteorologists and ocean scientists. However, deep-water moorings are quite expensive to maintain. It has long been apparent that both MBARI and the NDBC could save money by combining their monitoring efforts in a single buoy. CeNCOOS staff made this collaboration possible by bringing the two organizations together and facilitating the negotiations that led to the new partnership. CeNCOOS is one of 11 regional associations that are part of the US Integrated Ocean Observing System (IOOS).

In early 2011 MBARI and the NDBC signed a five-year memorandum of agreement to build, deploy, and test a new buoy that carries instruments similar to those on both 46042 and M2. NDBC provided the buoy and mooring, as well as a standard set of weather-buoy sensors to measure wind speed and direction, air temperature and relative humidity, waves, currents, and ocean temperature and salinity at various depths. MBARI provided instruments to measure chlorophyll (an indicator of algal blooms), suspended particles, pH, dissolved oxygen, carbon dioxide, and nitrate (a “fertilizer” for algal blooms).

On May 26, 2011, the new buoy (designated “buoy 46044”) was deployed by NDBC just east of the two existing buoys. Real-time data from the new buoy are available on the websites of CeNCOOS, the NDBC, and MBARI. 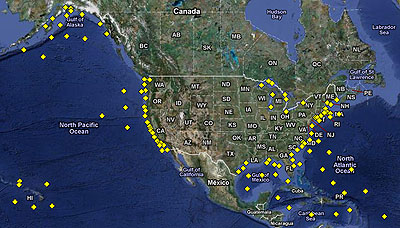 If it passes its six-month field test, the new buoy will join the NDBC network of over 90 data-collection yellow buoys, many of which are shown as yellow dots on this map.

After about six months, if the data from the new buoy look good, the two existing buoys may be removed, and buoy 46044 would officially take their place in NDBC’s network of 90 data-collecting buoys. If there is support and interest from other ocean-observing organizations around the country, similar arrays of instruments could potentially be added to other NDBC monitoring sites. This would provide a wealth of new information on ocean conditions around the United States.