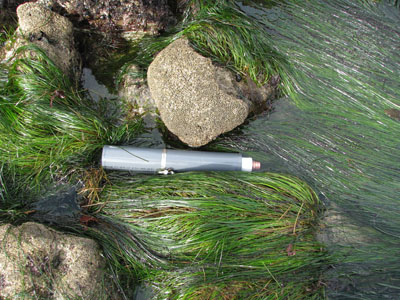 Marine researchers want to know the effects of an increasingly acidic ocean, and have turned to two tide pool dwellers for some insight. It appears that mussels and purple sea urchins could tell scientists how marine life might adapt to changes in ocean acidity (pH). These two key invertebrates have three things going for them: an intertidal home, a well-understood genome, and a calcium carbonate shell.

The rocky intertidal environment is in constant flux. During high tide seawater floods this zone, but after the tide ebbs the area between the tides is isolated from the rest of the ocean. Environmental conditions like temperature, salinity, and turbulence are not constant during the life of a mussel or a sea urchin. In addition to a daily flush of water, varying levels of oxygen and carbon dioxide make the intertidal a pretty dynamic place to live, chemically speaking. Because of these characteristics, MBARI researcher Francisco Chavez and his numerous collaborators attached pH sensors to this rocky habitat.

Chavez is measuring pH in the intertidal because, as he points out, “These organisms are seeing large swings of pH on a daily basis.” Daily variations of pH can occur from photosynthesis and from animals respiring and releasing carbon dioxide. The pH also fluctuates when upwelled water reaches the intertidal. During upwelling, colder deeper water that holds more carbon dioxide is brought to the surface just off the coast. In either case, increasing carbon dioxide increases the water’s acidity, thus lowering its pH. 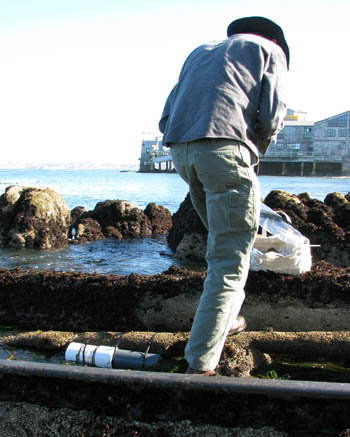 Not only does the rocky intertidal experience natural inputs of carbon dioxide, but also human-induced inputs from the atmosphere. Chavez’s pH measurements over the last 20 years show that seawater pH is on the decline in Monterey Bay. This matches the trend in global ocean pH, which is decreasing by 0.001 to 0.002 pH units per year. This sounds like a tiny drop, but pH is measured on a logarithmic scale, so small changes in pH can indicate significant physical effects. Research suggests the average ocean pH has shifted from a pre-industrial value of 8.2 to a current value of 8.1, resulting in an ocean that is three times more acidic. Predictions by the Intergovernmental Panel on Climate Change (IPCC) suggest ocean-surface pH may drop to 7.8 by 2100, resulting in a marine environment more acidic than at any time in the past 12 million years.

This scenario would be bad news for animals with calcium carbonate shells. A more acidic ocean could erode such shells in the same manner that soda eats away at tooth enamel. With ocean acidification a global concern, investigating how two common organisms combat daily pH changes, may indicate to scientists potential outcomes.

The intertidal zones being monitored are located not only in Monterey Bay, but also in Bodega Bay, near Santa Barbara, and along the Oregon coast. This ocean acidification study brought together a suite of researchers from six other institutions besides MBARI: Oregon State University (OSU), Stanford University, University of Hawaii, and the University of California at Santa Cruz, Santa Barbara, and Davis. The consortium is aptly named OMEGAS— the Ocean Margins Ecosystem Group for Acidification Studies. Omega refers to a measurement indicating how readily calcium carbonate dissolves in a particular liquid.

For this project, MBARI is providing pH sensors and Chavez’ team is collecting and analyzing the pH data. These sensors were first tested for long-term ocean use by MBARI marine chemist Ken Johnson. The pH measurements will complement genetic and physiological studies performed by Chavez’s collaborators. Since the genes of mussels and urchins have been largely mapped, they are two excellent candidates for these types of studies. Additionally, larval forms of these animals are sensitive to environmental disturbances, and can be raised in lab conditions that mimic their natural environment. 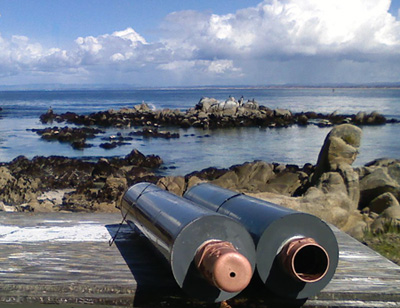 To deter biofouling, copper is placed around the intake on these pH sensors ready for an intertidal deployment. Image: Gernot Friederich © 2011 MBARI

Many of the collaborators have roots with the Partnership for Interdisciplinary Studies of Coastal Oceans (PISCO)– a set of coordinated studies from several west coast institutions looking at the impact of environmental disturbances in the ocean. PISCO investigators used their study sites and equipment to contribute oceanographic data to the OMEGAS project. Marine ecologist Steve Palumbi of Stanford is performing genetic research on urchin larvae. Graduate students at OSU are transplanting mussels from one study site to other sites with different levels of pH. A team of researchers at UC Davis is monitoring changes in mussel larvae in response to elevated levels of carbon dioxide.

Organisms along the west coast, especially in California and Oregon, experience differing amounts of upwelling. Therefore, mussels and sea urchins along the west coast do not all live in identical pH settings, and may vary in their sensitivity to pH shifts. For example, the Sand Hill Bluff study site near Monterey Bay is exposed to more upwelling than the Terrace Point site just a few miles away. Urchin genes from the two regions should look different. “The expectation is that genes from different collection sites will reflect the pH levels to which the organisms are exposed,” says Chavez.

The genetic and physiological results of this study could produce tangible evidence that the intertidal animals are responding to variations in pH. The researchers are testing urchins to determine if their genes turn on or off in response to pH changes. Researchers may be able to tell whether shells thin in response to lower pH, or if the animals counteract the decline in pH by cranking up calcium carbonate production. As the ocean turns more acidic, knowing these animals’ genetic blueprints and physiological shifts can help researchers predict the pH limits that the organisms can tolerate. However, it is still too early to say if the organisms will be able to acclimate to any of the predicted ocean changes.

Although it sounds easy enough to collect readings from a pH sensor close to shore, field work is never that simple. Storms have washed away several of Chavez’s sensors. More frequently the sensors clog when barnacles or other organisms block their seawater intakes. Even when thin copper plating is laid around the intake as a deterrent, algae or invertebrates such as snails still foul the sensor. Luckily, the sensors must be periodically collected by hand to download data, allowing frequent cleanings.

Though the OMEGAS project is funded for three years, the team hopes that the project will go much longer. It’s challenging to tell how or if organisms are adapting to a lower pH, since conditions change from day to day and year to year. The group may be able to confirm the effects of pH changes on mussels and urchins, but they can’t say how other marine organisms will react.

“We have decreasing pH in the world’s oceans, and maybe nothing catastrophic is going to happen,” Chavez says. “We just don’t know, yet.”