The geologic setting of the Gulf of California 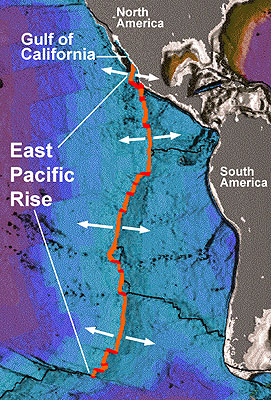 The Gulf of California lies at the northern end of an immense underwater mountain range called the East Pacific Rise. Base image modified from 1996 NOAA poster, “Age of the Ocean Floor.”

The Gulf of California sits at the northernmost end of an immense underwater mountain range called the East Pacific Rise, which extends across the Southeastern Pacific Ocean almost to Antarctica. Along much of this mountain range, lava wells up from below, causing the Earth’s crust to split apart, and forming what geologists call “spreading centers.”

Active spreading centers are hotbeds of volcanic activity. The resulting underwater volcanoes spread lava across large areas of seafloor and form the core of the East Pacific Rise. Water percolating down into these lava flows is heated, then rises back toward the seafloor, forming hydrothermal (hot water) vents in the seafloor. The floor of the Gulf of California is full of these vents, some of which gush water at over 300 degrees Centigrade. 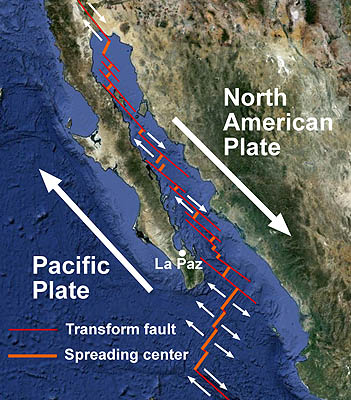 Just south of the Gulf of California, the East Pacific Rise breaks into a series of small spreading centers and transform faults. This illustration shows the approximate locations of some of these features. Arrows show the relative motions of the crust at a few spreading centers and transform faults (other locations are similar). (Base map from Google Earth. Tectonic features adapted from Alvarez et al., Bathymetry and active geological structures in the Upper Gulf of California, Bol. Soc. Geol. Mex v.61 n.1, 2009)

The East Pacific Rise is a “divergent” plate boundary, where huge slabs of the Earth’s crust (plates) are moving away from each other. Near the Gulf of California, the relative motion of the plates changes so that the two plates (the North American Plate and the Pacific Plate) are moving sideways, sliding past one another. It is this “sideways” motion that has created the many transform faults in the gulf, as well as the San Andreas Fault System in California. The combination of sideways motion and spreading also opened up many deep, elongated basins in the seafloor of the gulf.

The Gulf of California is a geologically young body of water that is still growing wider and longer. It probably formed five or ten million years ago, when Baja California sheared off from mainland Mexico and began to move northwestward up the coast of North America. In another million years or so, the gulf might extend northward as far north as California’s Salton Sea. Some geologists speculate that Baja California and parts of Southern California could eventually break off from the mainland entirely and become an island.