Testing the waters by taking to the air 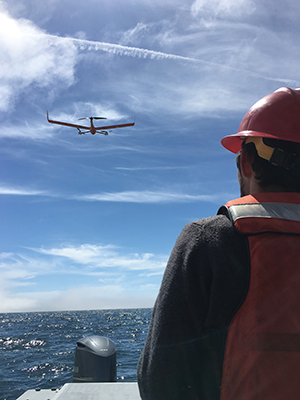 Trent Lukaczyk pilots the FlightWave Edge™ UAS as it comes in for a landing on the research vessel Paragon. Photo: Steve Haddock © MBARI 2017

Drones are not just for hobbyists, they have a new scientific application—indicating changes beneath the sea surface. MBARI researchers are exploring the possibilities of using unmanned aerial vehicles (UAVs) to accompany and enhance ocean science and engineering. Aerial platforms such as UAVs, or drones, as they are more commonly known, are making headway into scientific applications due to the variety of remote sensing capabilities they offer. However, due to difficult environmental conditions—water, wind, and waves—the marine sciences have been slower to adopt this technology. Fortunately this is changing, as there are now at least two UAV developers who have decided to meet this challenge and design aerial vehicles for marine applications.

One such vendor, FlightWave Aerospace Inc., founded by aeronautical engineer and MBARI collaborator Trent Lukaczyk, has developed a UAV that can take off and land vertically like a helicopter and then fly horizontally like an airplane for up to 100 kilometers range. This UAV, part of an unmanned aerial system (UAS) that comes with customizable payloads, can operate in wind speeds up to 40 knots and is even water resistant to a depth of one meter (three feet).

Intrigued by the proposed versatility of this aerial system, MBARI Biological Oceanographer Francisco Chavez was curious to see if its sensors could detect an upwelling front on the ocean’s surface from the air, and invited Lukaczyk to MBARI to test his “hybrid tricopter fixed-wing aircraft system,” as described on FlightWave’s website.

Upwelling fronts are plumes of cold water that bring an abundance of nutrients from the deep to the surface. This, in turn, causes a flurry of biological activity, from blooming phytoplankton up the food web to whales. One way for researchers to locate an upwelling front is by measuring the thermal infrared radiation/temperature emitted by the ocean’s surface. A dramatic change in temperature can indicate the presence of a front and the precise location is found between the coldest and warmest areas of surface water. 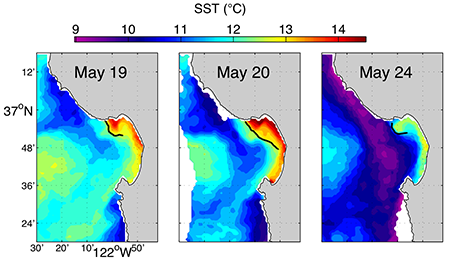 This sequence of thermal infrared satellite images of Monterey Bay shows the development of an upwelling front as indicated by differences in sea-surface temperature. The black line is the position of the front located between warm and cold water. The areas of dark blue and purple indicate the coldest water that originates from a frequent upwelling location northwest of the bay. This plume of cold, upwelled water seeds biological activity for Monterey Bay. Image: NOAA.

Satellites can detect thermal infrared radiation, but on a cloudy day their ability to do so is impeded. An aerial vehicle has the benefit of being able to fly below the clouds. However, UAVs can still have difficulty recording ocean surface temperatures due to interference by fog, mist, and water vapor. Currently, the best way to take the exact temperature of the ocean is directly from research vessels.

During MBARI’s 2017 CANON experiment Lukaczyk and his team joined MBARI researchers to deploy his UAV from the research vessel Paragon to fly across a known upwelling front. The FlightWave Edge™ UAS was fitted with two cameras—a thermal infrared camera to record temperature, and a standard visual camera to detect color changes on the ocean surface that might indicate phytoplankton blooms. 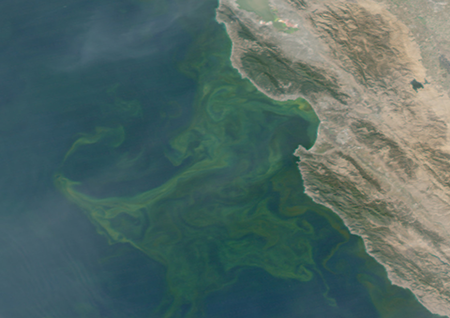 This true-color satellite image of the ocean off the Central California coast shows large swirling green eddies that indicate phytoplankton blooms. The image is obscured slightly by a hazy cloud cover. An unmanned aerial system would be able to capture true-color images while flying under the cloud ceiling. Image: NASA Ocean Biology Processing Group.

A fleet of long-range underwater autonomous vehicles (LRAUVs) was also deployed during the CANON experiment to fly underwater across the front. After the LRAUVs detected the position of the front, the drone was deployed to see how its thermal infrared radiation data would compare with data from the LRAUVs and other surface vehicles.

Following Federal Aviation Administration regulations, the licensed pilot onboard the R/V Paragon was required to keep the UAV in line of sight at all times. This meant once the UAV was vertically launched and began horizontal flight the Paragon had to chase it across the ocean at speeds of 25–30 knots to keep up with the fast-flying drone. 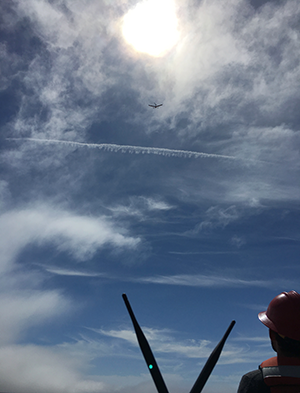 Over the course of a week the UAV flew ten transects perpendicular to a persistent upwelling front to see if its sensors could detect differences in water color and temperature on either side of the front. Flying 50 to 100 meters above the ocean, the UAV stayed safely above any oceangoing vessels, but still below the cloud ceiling.

The results from the CANON experiment were promising enough for MBARI researchers to consider using UAVs in subsequent experiments. Having the ability to autonomously study and collect data from both below and above the ocean’s surface would enhance and round out MBARI’s oceanographic research capabilities.

In addition to FlightWave, MBARI researchers are also looking into other UAV development companies, including one whose drone is not only designed to take off from and land on a moving vessel at sea, but can track that moving vessel as it pitches and rolls on the constantly moving ocean. Now that the marine sciences have the attention of UAV design companies, there will probably be more opportunities for MBARI researchers to take their ocean science and engineering into the air.