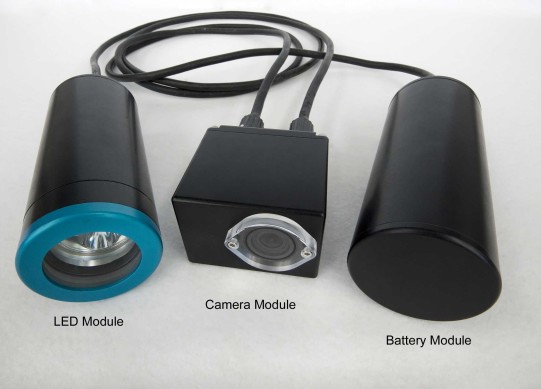 Scientists and engineers at MBARI have collaborated to develop SeeStar, a modular, light weight, self-contained, low-cost subsea imaging system for short to long-term monitoring of marine ecosystems. SeeStar is composed of separate camera, battery, and LED lighting modules. Two versions of the system exist: one rated to 300 meters depth, the other rated to 1500 meters. Users can download plans and instructions from an online repository and build the system using low-cost off-the-shelf components. The system utilizes an easily programmable Arduino based controller, and the widely distributed GoPro camera. The system can be deployed in a variety of scenarios taking still images and video and can be operated either autonomously or tethered on a range of platforms, including ROVs, AUVs, landers, piers, and moorings. Several Seestar systems have been built and used for scientific studies and engineering tests. The long-term goal of this project is to have a widely distributed marine imaging network across thousands of locations, to develop baselines of biological information.

Instructions, plans, software, and user manuals can be downloaded on a bitbucket repository: