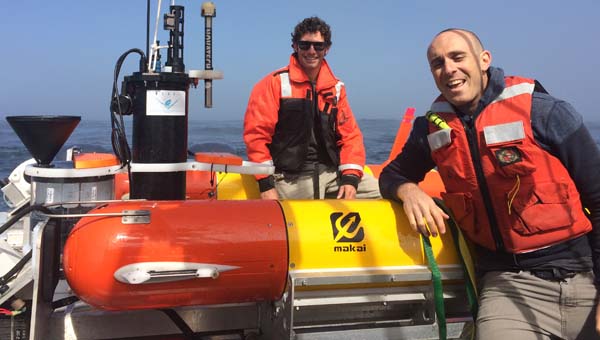 For generations, fishermen have noted the locations of hot fishing spots. Top marine predators like seabirds have also learned to repeatedly find these locations, so that the hotspots turn into truly magnificent spectacles of marine activity. Hotspots occur for a variety of reasons—they may be associated with seafloor topography (reefs, seamounts, shelf breaks, etc.), the convergence of warm and cool waters (fronts), or other physical processes such as upwelling, a process in which nutrient-rich cold water from the deep rises toward the surface. Even though these hotspots have been recognized for centuries, scientists still know very little about their appearance, persistence, variability, and overall role in ecosystem productivity and structure. New partnerships and technologies now provide an exciting opportunity to learn more about the intricacies of ecosystem hotspots.

Scientists and engineers from the Monterey Bay Aquarium Research Institute (MBARI) and the National Oceanographic and Atmospheric Administration (NOAA) Marine Fisheries, brought together under the Marine Biodiversity Observation Network (MBON) project, are currently conducting an experiment targeting these important hotbeds of activity. Since 2010, MBARI’s CANON (Controlled, Agile, and Novel Observing Network) Initiative, a large-scale, multi-instrument, multi-institutional field program, has sponsored annual field experiments, which have focused on the biological and physical processes in the Monterey Bay. During the Spring 2018 CANON experiment, researchers are conducting fieldwork from Año Nuevo, north of Monterey Bay, to Point Sur in the south.

CANON is designed as a responsive field experiment, which means that rather than running a pre-planned course, the direction of the experiment changes in response to the most recent information collected. Long-range autonomous underwater vehicles (LRAUVs) and wave-propelled gliders (Wave Gliders) will survey the study area for environmental clues that will guide the researchers to hotspot locations. After a hotspot is found, researchers will use traditional, shipboard sampling methods such as net tows (conducted by the scientific group on the NOAA ship R/V Ruben Lasker), and CTD sampling (conducted from MBARI’s R/V Western Flyer).

Additionally, one of the LRAUVs, Makai, will concurrently collect water samples for genetic analysis. Makai is equipped with a third-generation Environmental Sample Processor (ESP) developed at MBARI, and will collect water that will be analyzed for “environmental DNA” (eDNA)—DNA from the sloughed-off skin, mucus, and excrement of a wide variety of marine animals. Samples from net tows, CTD casts, and the ESP will then be compared via eDNA analysis to confirm if they detect the same organisms. Environmental DNA has great potential to help scientists assess the distribution and relative abundance of marine animals, from anchovies to blue whales. If proven reliable, this new method for surveying animal populations could revolutionize and streamline basic research, resource management, and conservation practices.

The results from these experiments will allow scientists to gain a more detailed understanding of the processes that drive the abundance and structure of marine communities in a moving ocean. This understanding is essential for forecasting the longer-term consequences of climate change on marine ecosystems.

The partnership between MBARI and NOAA during these experiments is far-reaching. Collaborations such as these are more important today than ever due to growing concerns over environmental degradation and tight budgets. These cooperative field programs provide excellent opportunities for MBARI’s research partners and governmental agencies to leverage their expertise, technologies, and budgets. In addition to the NOAA Marine Fisheries office, the National Ocean Service is represented by the US Integrated Ocean Observing Systems (IOOS) program. IOOS provides national coordination for the MBON program, and supports the management of profiling glider data during the experiment via the Central and Northern California Ocean Observing System (CeNCOOS). Scientists from the Atlantic Oceanographic and Meteorological Laboratory, part of the Oceanic and Atmospheric Research office, were aboard the Ruben Lasker collecting samples for eDNA analysis.

Updates from Katie Pitz aboard the Western Flyer:

Thursday, June 7, 2018. We’re beginning our joint sampling with the R/V Ruben Lasker today. We want to explore how fronts affect the aggregations of different organisms. Last night and this morning we took a Pairovet sample at our time series station, which is currently located within the frontal region.

Some of the organisms we found during last night’s net tow—including krill—are pictured below. Water flowing through the net is also collected and processed for later eDNA analysis. We’re also using acoustic data to direct our sampling to high-abundance points along the frontal transect.

Friday, June 8, 2018. We had a successful 24 hours yesterday sampling with the R/V Ruben Lasker during the day at the front and then following them at night along the Davenport line while they conducted their traditional trawl sampling. The Wave Glider Tiny that is following the 3G ESP LRAUV Makai has a very bright light and during night sampling it served as a great marker of the time-series station that we’re returning to every six hours. 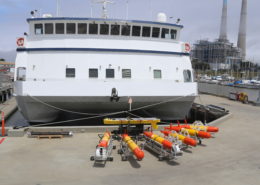 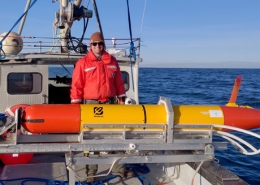 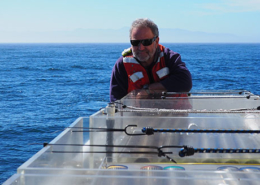