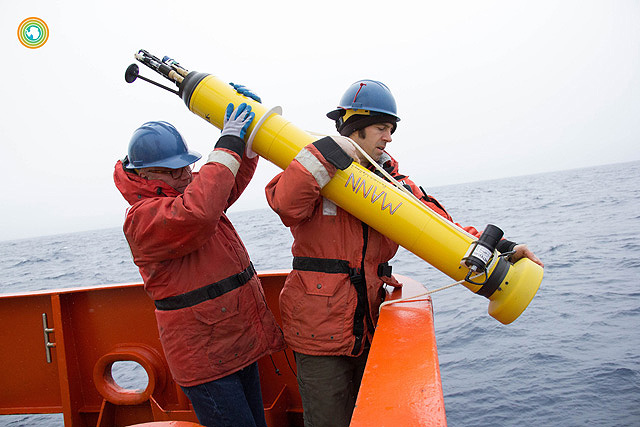 Researchers prepare to release a SOCCOM float into the Southern Ocean during a 2016/17 research cruise. Some of the instruments visible at the top of the float were developed by Ken Johnson’s group at MBARI. Image: Greta Shum/ClimateCentral.

Over the past four years, a network of robotic floats carrying high-tech sensors has given marine chemists a year-round, big-picture view of carbon cycling in the vast, stormy, and little-studied Southern Ocean. Data from these floats suggests that the Southern Ocean may take up much less carbon dioxide from the atmosphere than expected. These findings were published this week in a paper in Geophysical Research Letters. If these findings are confirmed, scientists may need to reassess how the Southern Ocean affects the Earth’s climate.

Unfortunately, the Southern Ocean is also one of least-studied areas of the world’s ocean basins. Few ships travel in this area, and the area is notoriously stormy in winter. Thus most shipboard studies have been conducted during the spring and summer. This means there are large geographical and seasonal gaps in the field data from this region.

The six-year, $21 million SOCCOM (Southern Ocean Carbon and Climate Observations and Modeling) program was designed to fill in some of these gaps by seeding the Southern Ocean with a network of robotic floats carrying chemical sensors. Supported by the US National Science Foundation’s Office of Polar Programs, this multi-institution program includes scientists from eight different research institutions, including the Monterey Bay Aquarium Research Institute (MBARI). 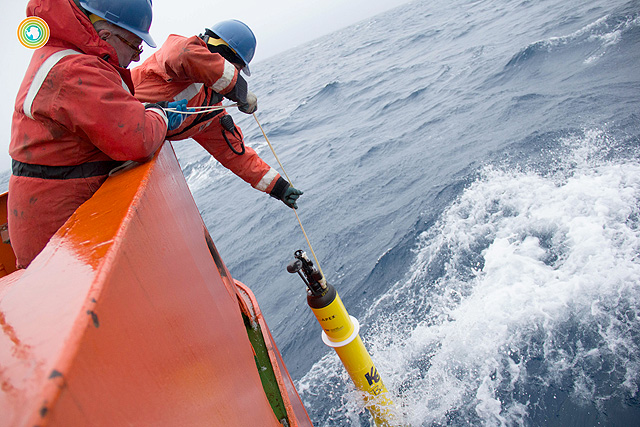 Researchers lower a SOCCOM float into the Southern Ocean on a relatively calm day during a 2016/17 research cruise. Image: Greta Shum/ClimateCentral.

MBARI Marine Chemist Ken Johnson is associate director of the SOCCOM program. His research group designed the sensors that measure pH and nitrate concentrations on the SOCCOM floats. Johnson has also been a key proponent, developer, and user of data from these biogeochemical floats.

“Much of our uncertainty about ocean processes and ocean health results because scientists sampling from ships can never collect enough samples or observe for multiple years to adequately characterize the three quarters of the planet that is covered by water,” said Johnson. “That’s why we need robotic observing systems, such as these floats, which can stay at sea when the scientists go home. Building such systems has been the goal of our research group at MBARI for the last 25 years.”

Over 100 SOCCOM floats have been released by ships crossing the Southern Ocean since 2014. These floats drift around the Southern Ocean for years, carrying instruments that measure water temperature, salinity, acidity (pH), and oxygen and nitrate concentrations. The floats spend much of their time “hibernating” 1,000 meters below the surface. But they are programmed to rise upward toward the surface every five to 10 days, collecting data as they go, then sink back down and go back into hibernation. These floats can operate even during bad weather and under ice-covered waters, and have provided scientists with their first year-round observations in most parts of the Southern Ocean. 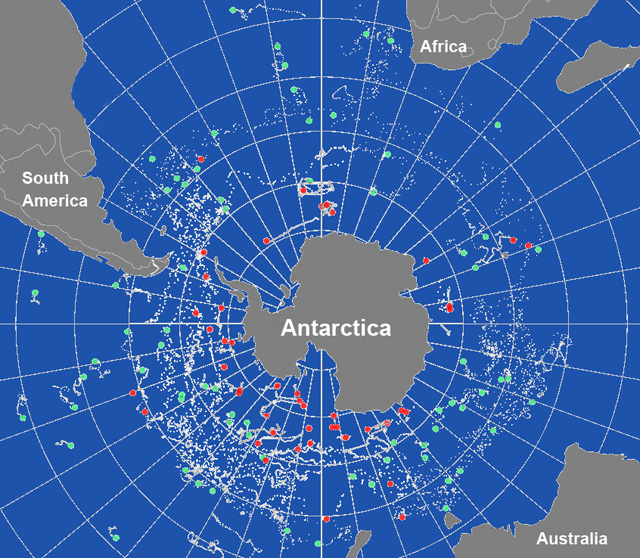 This map shows the positions and drift paths of SOCCOM floats as of August 2018. Green dots indicate active floats. Red dots indicate floats that are inoperative or underneath sea ice. Image: SOCCOM.

For the recent paper, researchers used information collected by SOCCOM floats to calculate the net flux (transfer) of carbon dioxide between the ocean and the atmosphere in different parts of the Southern Ocean at different times of year. These results show that the entire Southern Ocean (south of 35 degrees south latitude) absorbs about 0.03 petagrams (30,000,000,000,000 grams) of carbon each year.

Although this is a huge amount of carbon, it is much less than previous estimates, which ranged from 0.7 to 1.0 petagrams per year for the Southern Ocean. The differences between the new and old estimates is about equal to the yearly carbon dioxide emissions from the European Union—a globally significant amount.

The new estimates are lower primarily because prior data sets included few ship-board measurements made during the stormy winter months. During winter storms, large amounts of carbon dioxide are released to the atmosphere when deep, carbon-rich waters are upwelled to the surface.

“These results came as a really big surprise because previous studies found that the Southern Ocean was absorbing a lot of carbon dioxide,” said lead author Alison Gray, a professor of oceanography at the University of Washington. “If that’s not true, as these data suggest, then it means we need to rethink the Southern Ocean’s role in the carbon cycle and in the climate.”