The secret lives of sponges 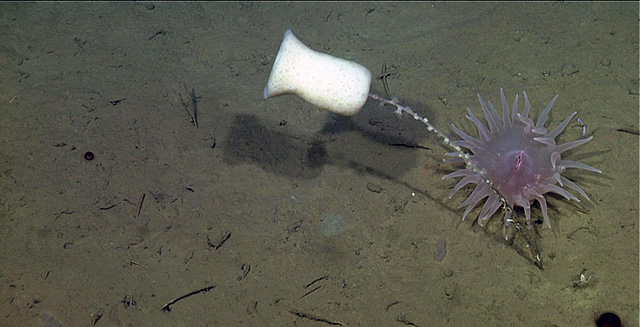 Photos taken every hour from June 2013 and April 2014 show the expansion and contraction of this sponge in the genus Hyalonema, which resembles a blooming tulip. Image: © 2015 MBARI

You might think that deep-sea sponges would be about as active as the one sitting in your kitchen sink. But when it comes to motion at the bottom of the ocean, there is more than meets the eye. Time-lapse photography taken over 30 years reveals that certain seafloor animals once thought to be static are actually expanding, contracting, tumbling, and rolling across the seafloor—just very slowly. 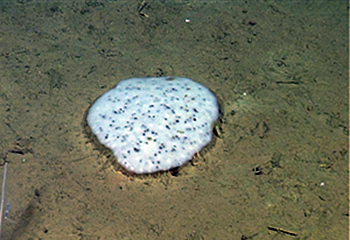 This “spotted biscuit sponge,” Docosaccus maculatus, moved in and out of the field of view of a seafloor camera over several months. Image © 2015 MBARI

In a recent paper published in Deep Sea Research Part II: Topical Studies in Oceanography, former MBARI Postdoctoral Fellow Amanda Kahn and her collaborators described these new behaviors in nine species of sponges and anemones at a long-term study site called Station M. Station M is located 4,000 meters (2.5 miles) below the ocean surface and about 220 kilometers (136 miles) offshore of Central California. Kahn’s paper is one of a series of papers about research at Station M that will be appearing in a special issue of Deep Sea Research this summer.

During a routine Station M cruise, Kahn, coauthor Paul McGill, and other researchers were scanning through time-lapse videos of the seafloor when Kahn saw something unexpected. “Everyone was watching sea cucumbers and urchins snuffling around on the seafloor, but I watched the sponge. And then the sponge changed size,” said Kahn. That was the initial eureka moment,” she added. ”We didn’t know to look at the sponges before.” 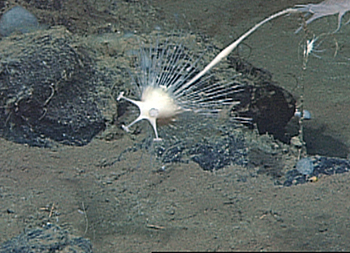 The carnivorous sputnik sponge, Cladorhiza kensmithi, retracts its parasol-like filaments when it has caught its prey. Image © 2000 MBARI

Kahn and coauthor Clark Pennelly analyzed the time-lapse photography and discovered that several glass (hexactinellid) sponges contracted and expanded rhythmically over time, without an obvious reason. The cycles of contraction and expansion lasted from hours to weeks. “It’s not yet known what the timing of those rhythms are, or why they happen the way they do,” said Kahn.

Previous studies have shown that a sponge’s natural filter-feeding capabilities lessen when they contract. The sponges at Station M were contracted in 30 to 50 percent of the seafloor images. Because sponges normally filter large amounts of particles from the water, this means their contractions could significantly impact nutrient cycling in the deep sea.

The team also observed the actions and retractions of other seafloor animals over time. A type of sponge known as the sputnik sponge, Cladorhiza kensmithi, extended and retracted its parasol-like filaments episodically. This species is known to be carnivorous, using the filaments to capture its prey, and is named after Ken Smith, the scientist who has led research efforts at Station M for the past 30 years.

Similarly, a colony of tiny sea anemones that resembled a string of small flowers on a stalk, rhythmically retracted and then re-opened their rings of tentacles. Another small sunflower-shaped anemone exhibited similar behavior. These movements were likely related to the anemones’ feeding on particles and microscopic animals that floated past their tentacles. 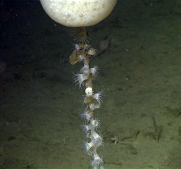 Epizoanthus stellaris looks a lot like a daisy chain, but is actually a colony of small, pale anemones that often colonize the stalks of sponges. Time-lapse images show the anemones extending and retracting their small rings of tentacles. Image © 2016 MBARI

“There is precedent for sponges contracting and expanding,” said Kahn. Her coauthor, Sally Leys, has documented the iconic behavior seen in freshwater sponges responding to particles in the surrounding water. If the sponges become irritated by these particles, they slowly expand the canals in their body and then contract them relatively quickly, expelling the particles. The whole process takes about 40 minutes and is similar to a person sneezing. “Basically, there’s an ‘ahh‘ when the sponge expands and the ‘-choo’ when it contracts those canals,” explained Kahn.

Such behavior has never before been seen in glass sponges, which contain skeletal structures made of silica glass. Although their name might imply that glass sponges are brittle and fragile, the glass structures in their bodies, called spicules, are assembled much like scaffolding—overlapping and resting on one another, but not fused together. By changing how much the pieces overlap, the sponges can contract or expand.

Changes in size were not the only surprising behavior Kahn witnessed. Another type of sponge, which Kahn referred to as the spotted biscuit, Docosaccus maculatus, was frequently seen being swept across the seafloor by currents, like a tumbleweed in the wind. Seafloor sediment is very irritating to many sponges, yet these transient spotted biscuit sponges appeared to be completely unaffected by their travels. 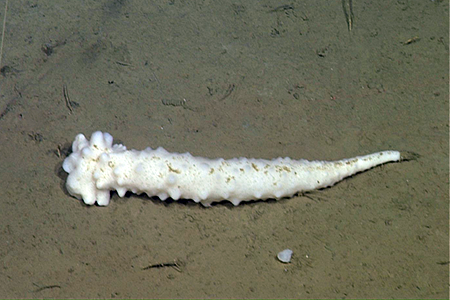 Pushed by currents, this trumpet sponge in the genus Hexactinellida, rolls across the muddy seafloor. Image © 2015 MBARI

Similarly, another species which Kahn nicknamed the trumpet sponge, Hexactinellida sp.1, seemed to ride the currents, rolling across the muddy abyssal plain for months at a time. “That’s weird,” said Kahn. “They should be constantly getting coated in sediments, and I don’t yet know how they deal with that. I saw one rolling around, and I thought that it was going to die, and instead, it just seemed perfectly healthy and continued rolling along for four months without any deterioration, until it was out of view.”

Because scientists have been studying Station M since 1989, they have detailed records of seafloor currents, food fluctuations, and other parameters at the deep-sea site. These data could help explain why the sponges and other animals at Station M act so strangely. “It was necessary to have the time-lapse [imagery] for us to see that these animals respond to changes in their environment. We don’t know what they’re responding to yet, but we’re going to study that next,” said Kahn, who is currently on the faculty at Moss Landing Marine Laboratories.

“The deep sea is a dynamic place, but it operates on a different timescale and with different stimuli than our world,” said Kahn. Her recent paper showed that sponges and anemones are a lot livelier than scientists assumed. They’re just living at a much slower pace than the humans that study them.

Watch a glass sponge sneeze on the deep seafloor!

April 7, 2020 – A 30-year study off the California coast has revealed dramatic fluctuations in deep-sea animal communities.
February 20, 2020 – Time-lapse photography in the deep sea over 30 years reveals sponges "coughing" and moving across the seafloor.
May 9, 2019 – A new study examines how sediments from human activities like bottom trawling for fish, are affecting glass sponges in British Columbia, Canada.
December 3, 2018 – Pulses of sinking debris carry large amounts of carbon to the deep seafloor, but are poorly represented in global climate models.