Abstract: A century-long EOF analysis of global sea surface temperature (SST) was carried out and the first six modes, independent by construction, were found to be associated with well-known regional climate phenomena: the El Niño Southern Oscillation (ENSO), the Atlantic Multidecadal Oscillation (AMO), the Pacific Decadal Oscillation (PDO), the North Pacific Gyre Oscillation (NPGO), El Niño Modoki and the Atlantic El Niño. Four of the six global modes are dominated by Pacific changes, the other (M2 and M6) being associated with the AMO and Atlantic El Niño, respectively. The principal component time series of the ENSO (M1) and North Pacific (M3) modes are coherent at time scales > 10 years, and their interaction results in the traditional PDO pattern and the dominant mode of Pacific multi-decadal variability. The M3 and PDO time series are well correlated but the EOFs have different spatial patterns. The fourth mode (M4) has been strengthening since the fifties and is related to the NPGO but also to El Niño Modoki especially at the decadal scale. The fifth global mode (M5) is also spatially and temporally correlated to El Niño Modoki. The Pacific SST modes are further related to atmospheric forcing, and the circulation of the North Pacific subpolar and subtropical gyres.

Data available for download: The six first principal components computed from ERSST v3b in the JClim study (original M-set, 1910-2009) are available here. Updated time series from ERSST v5 (1910-present) are available here. The update is realized by projecting the ERSST v5 anomalies on the original EOF maps (Fig. 2). The corresponding time series are plotted in Fig. 3 and are almost identical to the original M-set presented in Messié and Chavez 2011 for the 1910-2009 time period (r>0.94, and >0.97 for M1, M3 and M4). 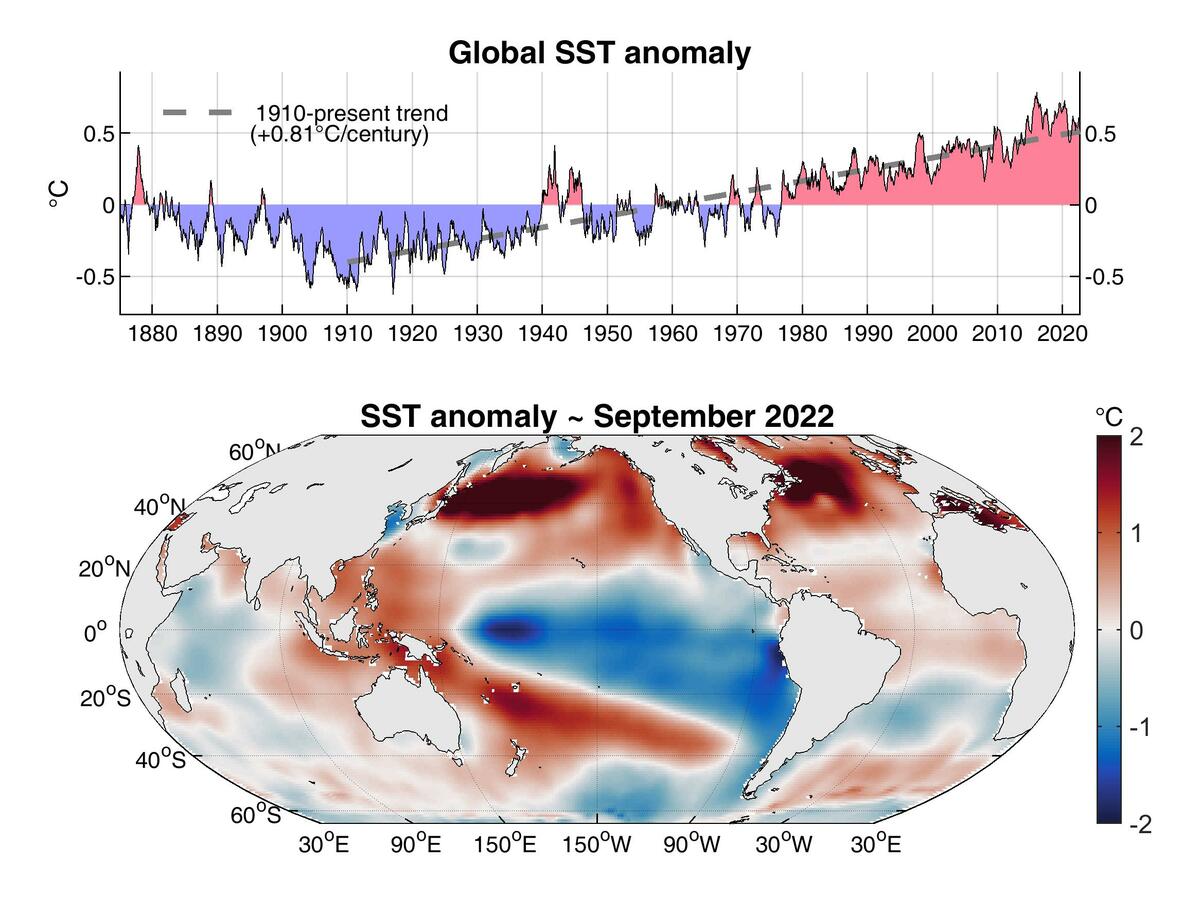 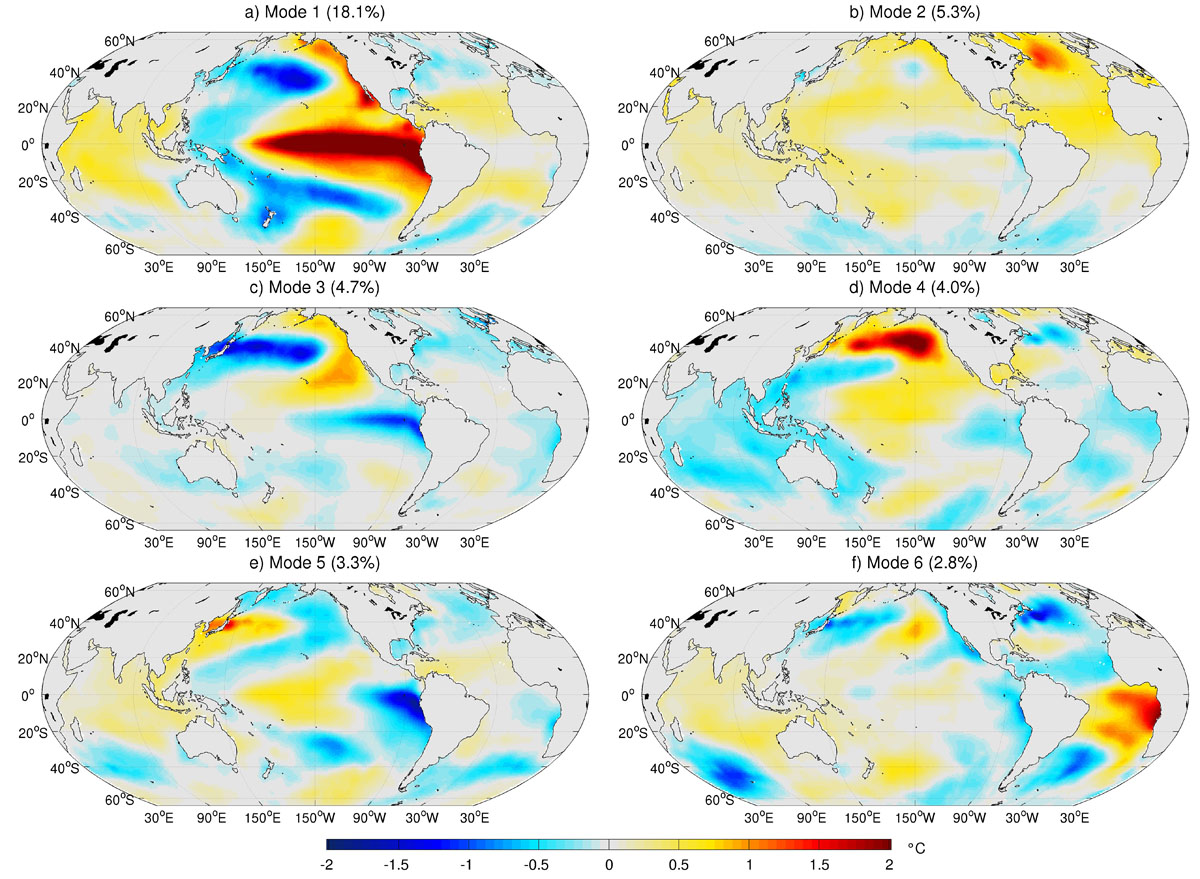 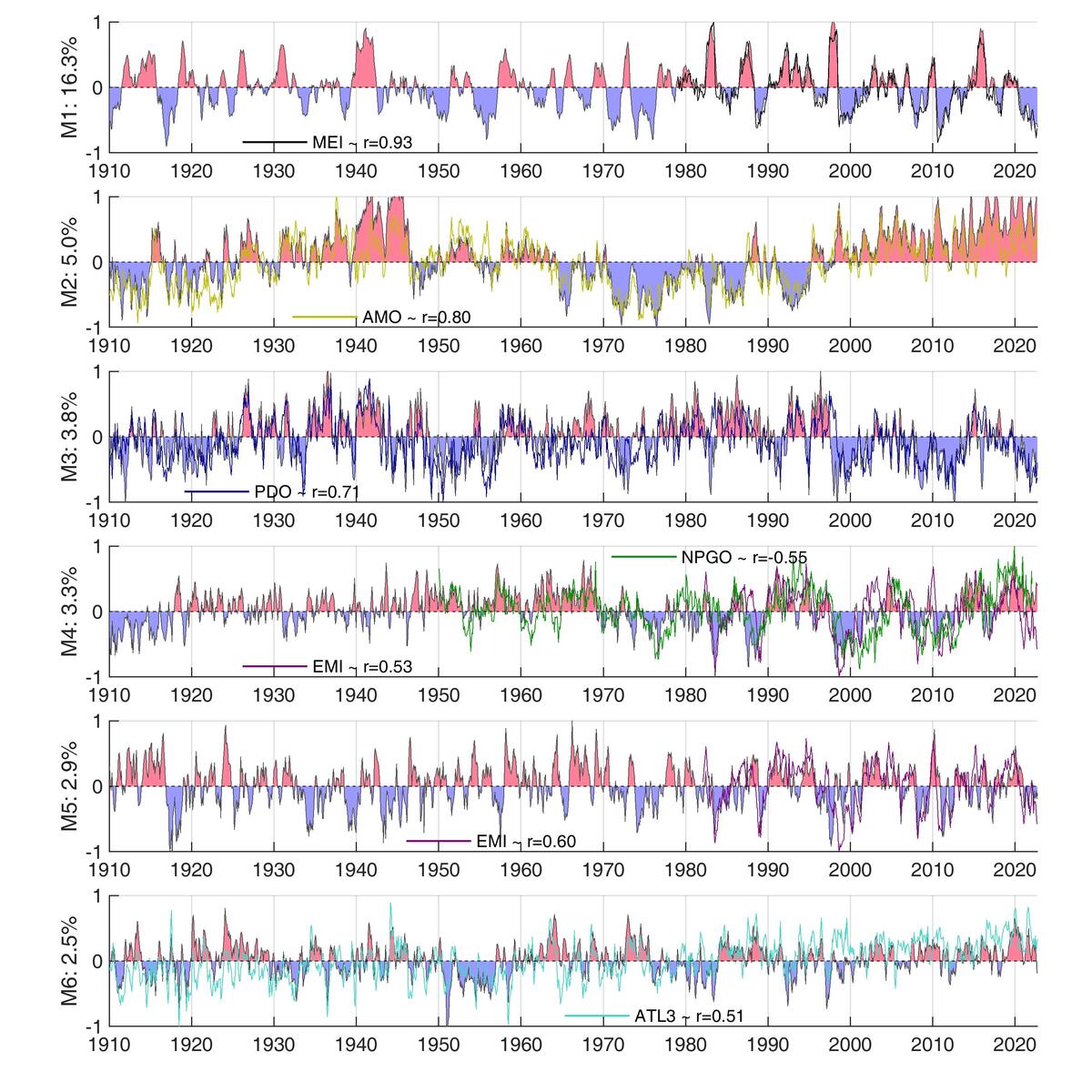 Fig. 3: ERSST v5 time series corresponding to the global EOF modes presented in Fig. 2 (updated monthly, see “Data available for download” above). Time series of well correlated regional indices are superimposed. The NPGO index is negatively correlated with M4 and has been inverted. Both the percentage associated with each mode and the correlation with climate indices are updated to correspond to the full time series. Link to time series, data visualization.