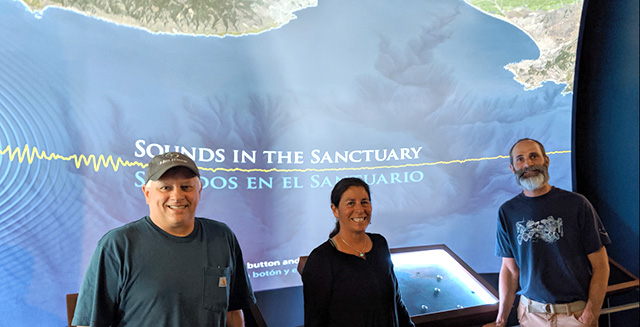 Lots of people come to Monterey Bay National Marine Sanctuary to see sea otters, whales, and other wildlife. Thanks to MBARI scientists and engineers the public can now hear that wildlife, as well as other sounds recorded by an underwater microphone (hydrophone) on the deep seafloor just outside of Monterey Bay. Recordings from the hydrophone are live streamed on MBARI’s website and are featured in a new exhibit at NOAA’s Monterey Bay National Marine Sanctuary Exploration Center, located at the base of the Santa Cruz Wharf.

The grand opening of the new exhibit will be held on Friday, October 11, from 5:00 to 8:00 p.m. This free public event will include a presentation by MBARI Oceanographer John Ryan and live music incorporating the sounds of humpback whales and other marine mammals.

The idea for the Monterey Bay Soundscape exhibit started out as a “fun project” by MBARI Operations Engineer Dave French. French realized that a mobile sound playback system could give the public a chance to experience some of the fascinating sounds from the hydrophone. Using inexpensive, off-the-shelf electronics parts, a tiny computer, a rolling case, car speakers, and his personal subwoofer speaker, French built a portable system that allowed anyone to push a button and hear sounds ranging from the deep calls of blue whales to the gentle hiss of rain on the sea surface.

After using French’s system at several public events, including two demonstrations at the Sanctuary Exploration Center, Ryan said, “We noticed that people really enjoyed listening to these sounds and interacting with the device.”

“We soon realized that the topic of sound in the ocean was a great exhibit opportunity, and that using the hydrophone recordings would be a great way to engage the public,” said Lisa Uttal, Soundscape Exhibit project manager. Uttal was instrumental in obtaining NOAA funding for the design, development, and fabrication of the exhibit.

Inspired by French’s system, Ryan and Uttal designed a large, interactive ocean acoustics exhibit. “We wanted people to not just hear the sounds, but to see them, and feel them as well,” Ryan said. 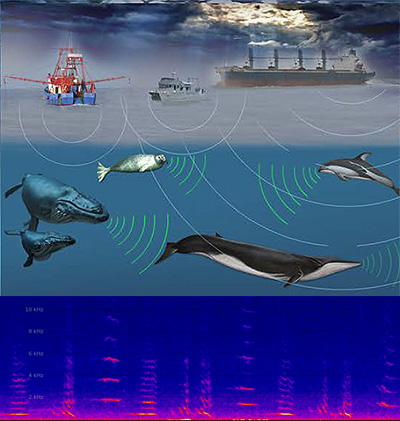 This illustration shows some of the sources of underwater sound in the Monterey Bay National Marine Sanctuary. At the bottom is a spectrogram of humpback whale calls recorded by MBARI’s hydrophone. Illustration courtesy of NOAA/Michael Thompson.

The completed exhibit allows visitors to hear 10 different sounds produced by animals, humans, and natural processes, along with video showing a graphic display (a spectrogram) of each sound. “Having the spectrogram synch up with the sound helps people understand how the spectrogram works,” Ryan said. “We were amazed at how quickly people got it.”

As the audio plays, viewers are not told what is making the sound until a video of the animal or process is revealed on the screen. The sounds are also described in on-screen text and narration, which relates the sounds to the sanctuary’s stewardship efforts, such as protecting endangered species and understanding the impacts on wildlife of noise from ships and other human activities.

Putting together the exhibit required a collaborative effort by staff at both MBARI and MBNMS. Ryan and Uttal developed and designed the exhibit, selected the sounds to feature, and created interpretive content and individual messages that tell the story of each sound. French designed and built the hardware to play the sounds and did the programming behind the exhibit. MBARI Marine Operations Technician Mike Conway built an interactive kiosk sturdy enough to survive hordes of kids and other visitors. 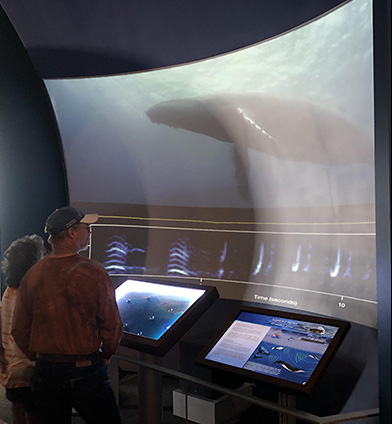 “We’re really excited to bring this visitor experience to the public, letting them know about research at MBARI and giving them the opportunity to ‘listen in on the sanctuary,’” Uttal commented.

“What I like best about the exhibit,” Ryan said, “is the amazing diversity of sounds. There are animal sounds, human sounds, even the sounds of an earthquake. How cool is that?” 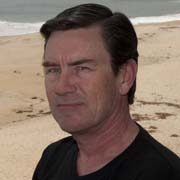 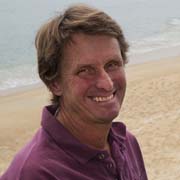