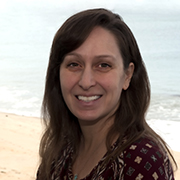 Karen began her position as a research technician in the Research and Development Division at MBARI in 1997. During that time she served as Chief scientist on 16 ROV Ventana dives and Co-Chief Scientist on more than 40 ROV dives in the Monterey Bay. Karen received her BS in Marine Science from the University of South Carolina in 1993 and an MS in Marine Science from the University of California at Santa Cruz in 1995. In January of 2001, Karen made a move from Science to the Software Engineering Department at MBARI and now concentrates her efforts in the technical challenges of Oceanographic research.