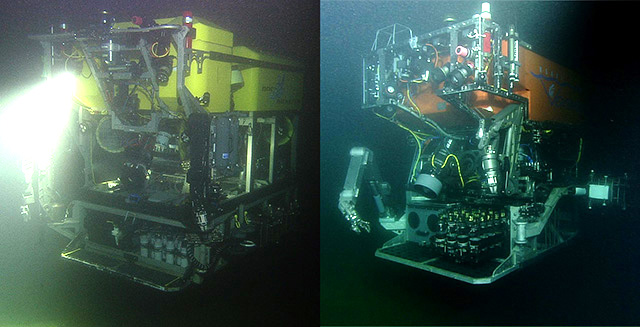 During a recent dive, MBARI’s ROVs Doc Ricketts (left) and Ventana (right) shot underwater video of each other. Image: © 2020 MBARI

MBARI’s marine operations staff and remotely operated vehicle (ROV) pilots recently performed an intricate underwater robot ballet 650 meters (2,000 feet) below the surface of Monterey Bay. Their goal was to capture underwater video of MBARI’s two large ROVs. The footage will be used in video productions by MBARI and the Monterey Bay Aquarium.

Having one robot shoot video of another robot sounds simple, but this was an extremely challenging operation. Though operating deep below the sea surface, the robots are controlled from two different research vessels at the sea surface. The ROVs are connected to these ships by very long tethers (see image below) that  carry thousands of volts of electrical current and transmit data through hair-thin fiber-optic fibers. Even during normal ROV dives, the ROV pilots must be very careful to avoid tangling the tethers or catching them on the propellers of the host ships. 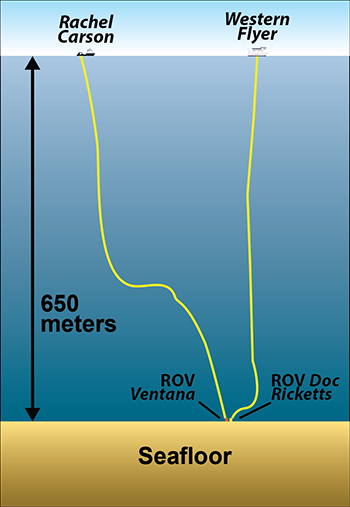 This illustration shows the two ROVs and their support ships, approximately to scale. The yellow lines represent the tethers for each ROV. Image: Kim Fulton-Bennett © 2020 MBARI

With two ROVs in the water at the same time, one of the biggest risks is tangling the tethers of the two vehicles. This prospect becomes even more likely when the two vehicles are close together. In this case, the ROVs had to get within a few meters of one another to get good video footage.

Fortunately, on January 13, the day of the shoot, sea conditions were relatively calm all day, with light winds and the occasional long, rolling swell. The video teams on the two research vessels had previously agreed to meet at a spot 21 kilometers (13 miles) west of Moss Landing, near an underwater ridge on the edge of Monterey Canyon.

The research vessel Rachel Carson left Moss Landing Harbor before dawn. Reaching the dive site first, the pilots sent ROV Ventana into the depths to check the conditions in the water column and at the seafloor. There was a fair amount of organic debris (marine snow) in the water, so the visibility was not great. An even bigger challenge was that strong currents near the seafloor made it hard for the pilots to control ROV Ventana.

The pilots couldn’t set the ROV down on the seafloor because it would have stirred up huge clouds of mud, potentially ruining the video shoot. To make matters worse, the ROV’s automated station-keeping system was not able to cope with the currents. So the pilots had to fly the ROV just a few meters above the bottom, using rocks or other objects on the seafloor as landmarks to tell if the ROV was holding position or being swept away by the currents.  That meant they had to stay within sight of the seafloor throughout the dive.

The research vessel Western Flyer arrived at the dive site about an hour after the Rachel Carson. The crew launched the ROV Doc Ricketts, which “flew” down to meet ROV Ventana on the seafloor. With more powerful thrusters and a more vertical tether, Doc Ricketts was able to navigate through the currents and carefully approach Ventana.

To anyone observing this deep-sea tête-à-tête, the underwater robots might have looked like two large, lumbering animals doing a mating dance. 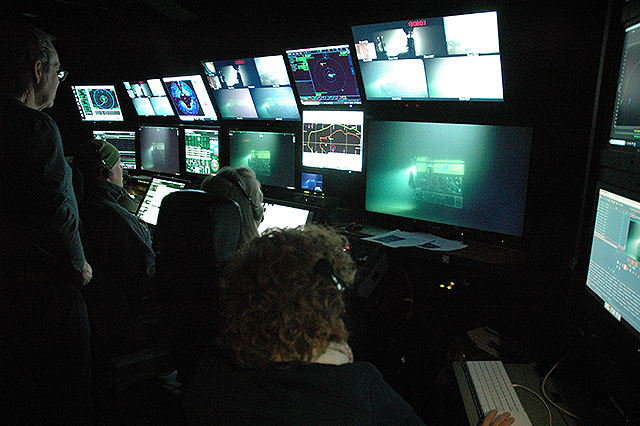 Researchers and ROV pilots in the control room on the research vessel Rachel Carson watch as ROV Doc Ricketts is filmed by the main science camera on ROV Ventana. Image: Kim Fulton-Bennett © 2020 MBARI

First the pilots turned the lights on the ROVs off and on, and moved them back and forth. This allowed theVentana pilots to keep an eye on the seafloor without blinding the video camera on Doc Ricketts. Next Ventana moved back and forth, in and out of the field of view of the video camera on Doc Ricketts. Strong currents occasionally buffeted Ventana, leading to some close encounters but no outright collisions. Finally Ventana demonstrated various tools for collecting seafloor sediment and marine animals.

After Ventana finished its demonstrations, the two ROVs switched roles and Ventana filmed Doc Ricketts doing the same maneuvers. About this time the currents died down and visibility improved, which made the whole process much easier. When all the shooting was completed, the two robots ended up within a meter or two of one another, so the pilots celebrated by gently “bumping fists” using the manipulator arms on the vehicles. 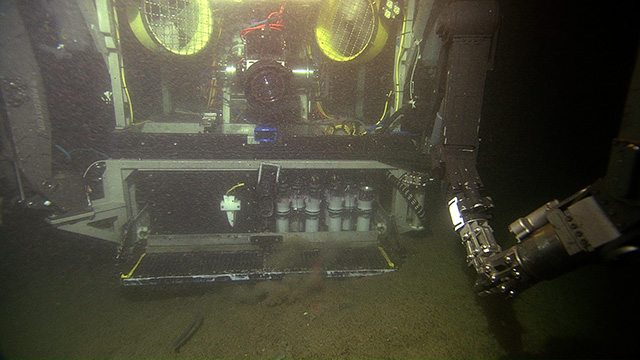 This frame grab from ROV Ventana shows the two ROVs “bumping fists” at the end of the video shoot. Image: © 2020 MBARI

Although the shoot was a bit stressful for the ROV pilots and the ship captains, the resulting video clips will be used for years to come.

Video about the ROV video shoot: