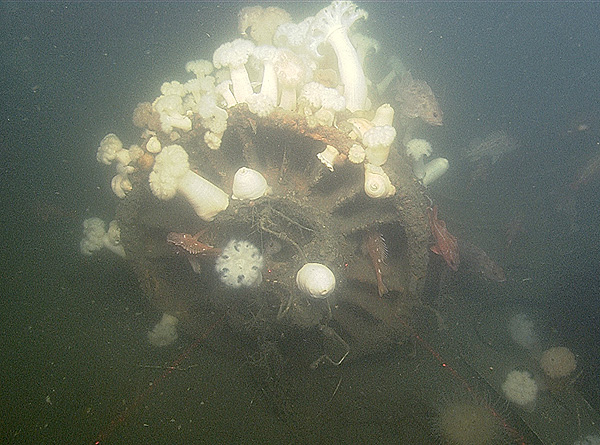 Part of a jet engine discovered in September 2014 on the Monterey Bay seafloor. The engine has been colonized by rockfish and sea anemones. Image: © 2014 MBARI

Ever since MBARI researchers discovered a jet engine on the floor of Monterey Bay in 2014, (former) MBARI Deputy Director of Marine Operations Chris Grech has been trying to figure out how the engine got there. Here’s what we know so far:

Around noon on September 18, 2014, MBARI scientists were conducting a research dive on the seafloor of Monterey Bay, about 12 kilometers southwest of Santa Cruz and 90 meters below the surface. For the last two hours they had been using MBARI’s remotely operated vehicle (ROV) Ventana to count seafloor animals along an undersea cable that connects MBARI’s MARS underwater observatory to shore.

Suddenly, several large objects appeared on the ROV’s sonar, about 20 meters away from the cable. The ROV pilots were intrigued because hard objects are rare on the flat muddy plain of the continental shelf. As the ROV approached, the pilots and researchers could see debris, including several large cylinders, lying on the seafloor, coated in mud and colonized by sea anemones. After flying the ROV around the cylinders, the research team concluded that they were parts of a jet engine. Although they found other small pieces of debris, the team could not see any signs of a plane’s wings or fuselage.

Using the ROV’s manipulator arm, the pilots collected a couple of fragments of metal and a piece of black rubber hose. When the ROV returned to shore, the crew turned the artifacts over to Chris Grech, who has a strong interest in aviation history. (Grech was the lead researcher in the discovery of the wreck of the USS Macon and her four Sparrowhawk biplanes off the Big Sur Coast.) 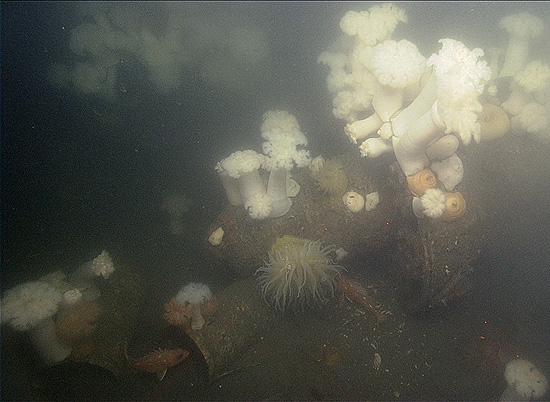 View of rear of jet engine showing a combustion can on the seafloor (at lower left). Image: © 2014 MBARI

Back at MBARI, Grech took photos of the debris from the jet and sent them out to experts who he hoped might be able to help him identify the engine. However, none of the experts could draw firm conclusions based on the fragments that had been collected.

It wasn’t until spring of 2016 that Grech finally got additional clues after he contacted marine archaeologists from NOAA, who passed the images to some of their contacts. They posted photos of the debris on an aviation web forum that focuses on combat aircraft. Within a few days, the enthusiastic and knowledgeable members of the forum had provided a number of useful comments on the photos. As Grech put it, “From there, it just took off!” 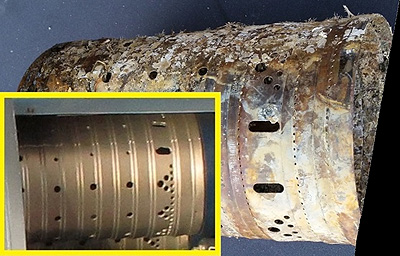 Based on the pattern of holes in a metal cylinder that was part of the engine’s combustion can, individuals on the web forum site identified the engine as a J57 engine. They were also able to decode the numbers and text printed on the rubber hose that was recovered. This information helped the forum members and NOAA staff confirm that the engine came from an F8U Crusader jet.

This type of jet was used extensively in the 1950s and 1960s, and a number of them were based at Moffett Field, just over the Santa Cruz Mountains from the crash site.

At that point, Grech started poring over old newspaper stories from Moffett Field Historical Society and other historical sources, looking for records of any Crusader jets that might have crashed in Monterey Bay. He found one newspaper story about a crash in the early 1960s and a Navy record of a second crash in 1959. Eventually he discovered evidence that six different Crusader jets had crashed in the Monterey Bay area between 1957 and 1960. He even located a fisherman who was an eye witness to one of these crashes in the early 1960s, when two F8 jets collided in midair. 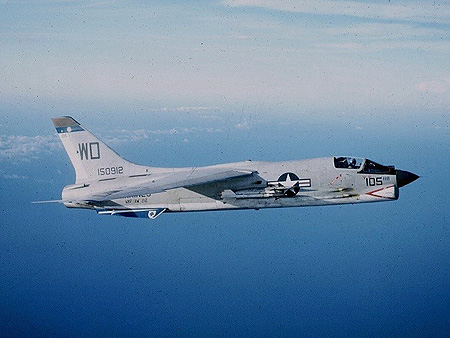 Grech also discovered that the uncle of an MBARI engineer, Kevin Gomes, was a naval aviator who had successfully ejected from a Crusader over Monterey Bay in 1959. Working with his uncle, Gomes researched this incident and provided additional information and clues. Grech and Gomes also visited the historical aircraft carrier USS Hornet in Alameda, California, where they examined a Crusader jet on display on the ship’s flight deck. During this visit, they confirmed that the hose recovered by ROV Ventana was from the speed brake mechanism beneath the plane’s fuselage.

Armed with this new found wealth of information, Grech and Gomes are trying to pin down exactly which Crusader crash yielded the debris that MBARI researchers found on the seafloor. Over the next few months they hope to study Navy accident reports of the crashes, analyze the LORAN-A navigation data from the fisherman who witnessed one of the crashes, and eventually interview one or more eye witnesses to the crashes.

Aug 10, 2016 - In 2014, MBARI researchers discovered a jet engine on the floor of Monterey Bay. Since that time, MBARI Deputy Director of Marine Operations Chris Grech has been gathering clues as to how this engine arrived on the muddy seafloor of the bay.
Aug 18, 2015 - On August 18, researchers on board the research vessel Nautilus used the ROVs Hercules and Argus to dive on the wreck of the USS Macon, a rigid-frame dirigible airship that crashed off the Big Sur coast in 1935.
Nov 5, 2014 – During a recent expedition to map earthquake faults in Monterey Bay, MBARI researchers discovered the wreck of a barge on the muddy seafloor. The barge Umpqua II was about 1,700 meters (one mile) below the ocean surface.
Scroll to top