Eight long and lanky legs make it easy to move along the deep seafloor.

Like spiders on land, sea spiders—also known as pycnogonids—come in a range of sizes and appearances. They’re widespread and occur across a variety of ocean environments. The deep sea is home to the giant sea spider (Colossendeis sp.), which can grow larger than a dinner plate. This spindly spider lumbers along the seafloor on jointed, stilt-like legs.

Instead of spinning a delicate web of silk to trap prey, a giant sea spider uses an elongate, tube-like proboscis to slurp up its prey. While studying the unique communities that form around decomposing whale carcasses on the deep seafloor, MBARI researchers observed a giant sea spider crouched over and clinging to the fleshy tentacle of a pom-pom anemone (Liponema brevicorne). Upon closer inspection, the sea spider was actually sucking out the juices inside the tentacle. Another sea spider was even observed clipping a couple of tentacles and taking its dinner to go! 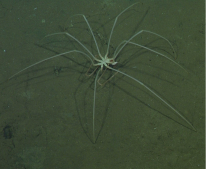 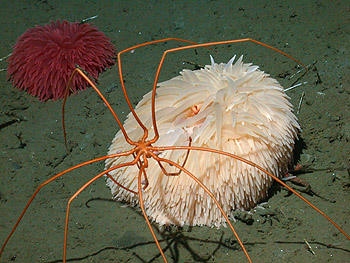