While surveying the Gumdrop Seamount off the central California coast in 1998, MBARI staff spotted an unusual—and exceptionally large—jelly. This crimson creature was a full meter across. Unlike jellies that dwell near the ocean’s surface, this one didn’t have tentacles. Instead, a cluster of finger-like oral arms dangled beneath its bulky bell.

A closer look confirmed this was a new species—and one that had actually eluded our scientists five years earlier. Detailed video observations captured by our robotic submersibles helped MBARI researcher George Matsumoto and his colleagues in California and Japan formally describe this unusual jelly. They named it Tiburonia granrojo in honor of MBARI’s now-retired remotely operated vehicle (ROV) Tiburon, which was instrumental in documenting this delicate drifter in its natural environment.

Scientists have since spotted this jelly across the Pacific Ocean, from Baja California to Hawaii to Japan. That something so big remained undiscovered for so long shows how little we’ve explored the deep sea—and what more must be out there waiting to be found. 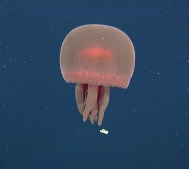 January 28 - February 2, 2020 – The Bioluminescence Lab will conduct ROV dives to study the biochemical, physiological, and genetic adaptations that midwater organisms have evolved to survive and diversify in the deep sea.
Scroll to top