It was a typical day for researchers working onboard the R/V Rachel Carson collecting water samples in Monterey Bay until they received a surprise visitor—a handsome seabird called a brown booby, (Sula leucogaster). This bird had a striking coloration and stood about 38 cm (15 inches) tall, larger than the more commonly seen gulls. Brown boobies are generally associated with warm tropical waters. They breed at colonies on the Hawaiian Islands and islands in Mexico and are not commonly found as far north as central California. This bird was far from home! 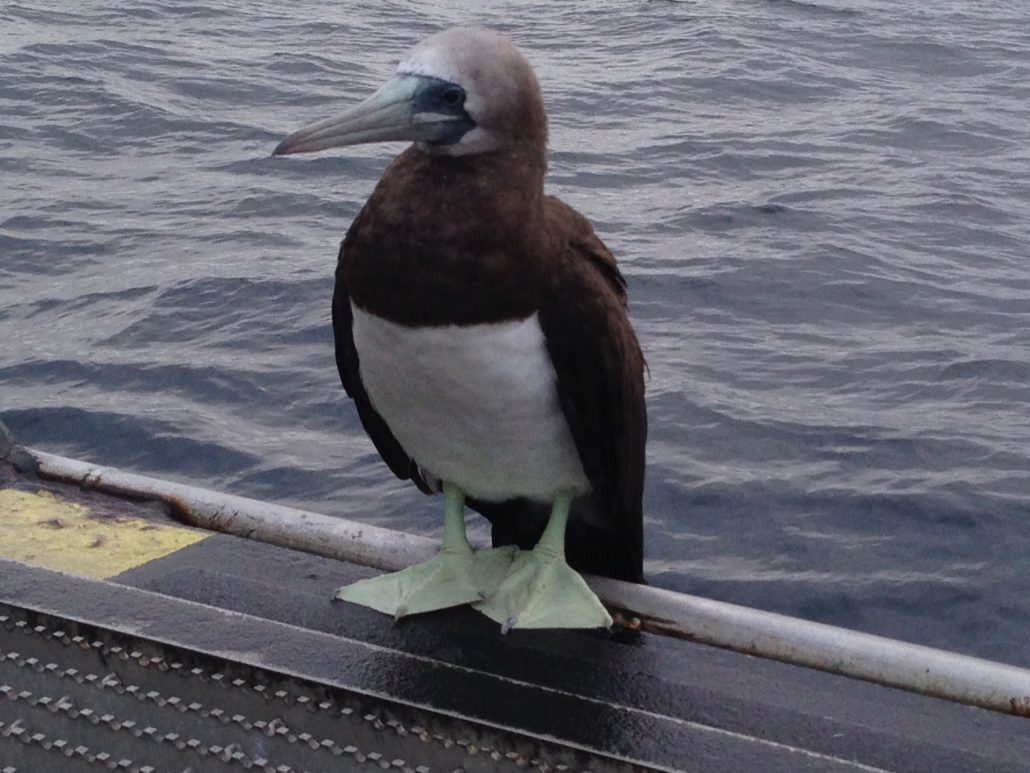 A tropical seabird called a brown booby made a surprise appearance on the R/V Rachel Carson. Photo by T. Pennington.

Out on the Farallon Islands, about 48 kilometers (30 miles) west of San Francisco, seabird researchers have been seeing individual brown boobies sporadically since 2003, with a significant increase in numbers in the past few years, with up to 32 birds sighted in one day in February 2016. This increase in boobies in the winter of 2015/2016 coincided with the presence of the warm water “blob”, a patch of relatively warm water that persisted off the coast of North America. However, this January, there were far fewer boobies on the Farallon Islands, and the ocean is back to cooler temperatures.

In the days leading up to the booby sighting on Monday, January 9th, the atmospheric river (a jet stream of moist air) known as the Pineapple Express, was blowing across the Pacific Ocean from Hawaii to California. It’s likely this bird was blown in with the Pineapple Express all the way to Monterey Bay.

After landing on the R/V Rachel Carson, the brown booby perched on the railing and watched the researchers at work. The crew offered the shivering bird some canned sardines, but it did not take any interest. Boobies eat a variety of fishes, but prefer plunge-diving from the air for live prey rather than eating sardines from a can. After a brief rest on the ship it flew off, possibly in search of warmer weather.