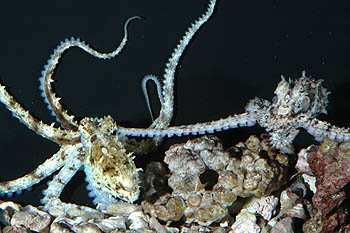 A male octopus (right) reaches out his mating arm toward a female octopus. During mating, the male transfers packets of sperm to the female using this specialized arm. Image:© 2005 Roy Caldwell

Octopuses are some of the most behaviorally complex seafloor animals, with sharp eyes and quick, active brains, which help them capture prey and respond rapidly to changes in their environment. An octopus on the prowl behaves more like a house cat than a relative of snails and slugs. However, octopuses are mostly solitary creatures, with few opportunities for contact with others of their own kind. Even when mating, it has long been assumed that male and female octopuses just happen to “bump into” each other, mate briefly, and then go about their separate lives.

As part of her PhD research at the University of California, Berkeley, Huffard spent several field seasons snorkeling and wading among the coral reefs of Sulawesi, Indonesia, recording the behavior of individual octopuses in the species Abdopus aculeatus. Although small (with bodies about the size of a grapefruit) and well camouflaged, these octopuses are relatively easy to study because they are active in the daytime and live in areas of open sand mixed with small rocks and sea grass.

Through painstaking record keeping and data analysis, Huffard was able to identify and track the activities of 167 individual octopuses. As she points out in her paper (co-authored with Roy Caldwell of UC Berkeley and Farnis Boneka of Universitas Sam Ratulangi), this effort represented “the first long-term (hours to days) observations of interactions among known octopuses in the wild.” In contrast to previous short-term and laboratory studies, Huffard’s research showed sexual displays, competitive behavior, and even mate preference among male octopuses.

Actually, competition among male octopuses in this area was intense, perhaps because there were almost twice as many males as females. Nonetheless, some male octopuses (the larger ones) were able to mate repeatedly with specific female octopuses (also the larger ones) over periods of several days. These mating pairs of octopuses often built dens—typically small holes in the sand—within about 60 cm (two feet) of each other. In many cases, the male could remain in his den and mate with the female simply by extending a specialized mating arm to transfer sperm to the female, who remained in her den throughout the process.

Two male octopus grapple, after the light-colored octopus tried to approach a female that the darker octopus was guarding. Image:© 2005 Christine Huffard

Although the males of mating pairs frequently chased away rivals, they weren’t above mating with other female octopuses. In fact, Huffard observed several of these paired males mating with other females while the males were out on foraging expeditions. After these “affairs,” the males returned to their dens, although Huffard could not tell if this reflected fidelity to the den itself or to the female octopus nearby.

A few of the male octopuses tried an entirely different strategy, which Huffard labeled the “sneaker” approach. These males approached guarded females by scuttling from one hiding place to another with their bodies carefully camouflaged and flattened against the seafloor. They even managed to conceal the brown stripes on their mating arms that might identify them as males.

In three cases, sneaker males succeeded in approaching and mating with guarded female octopuses. These matings lasted almost twice a long as normal. Huffard speculates that the sneaker males may have taken longer to mate because they first tried to remove other males’ sperm from the female octopuses’ mantle cavities or deposited more sperm than average. After mating, the males stealthily made their way back to their own burrows. In one case, a guarding male apparently thought an interloper was a female, and approached him with the apparent intent to mate. However, the guarding male soon discovered his mistake and wrestled with the interloper until the sneaker male left.

In concluding her paper, Huffard points out that her research subjects exhibited “the most complex mating behavior observed thus far for any octopus species.” She presents ample evidence that male octopuses of this species can tell the sex of others of their species at a distance and actively choose which individuals to mate with.

Huffard suggests that similar mating behavior may be found in other species of octopuses, especially those that frequently come in contact with one another, and in cases where there are significantly more males than females in the population. She points out that previous researchers may have seen some of these mating behaviors in the field, but could not take the time and effort necessary to understand their significance. Thus, one important lesson from this study is that even in an age of sophisticated equipment and DNA analysis, there is still no substitute for sustained field observations of animals in their natural habitat.