When the humpbacks sing 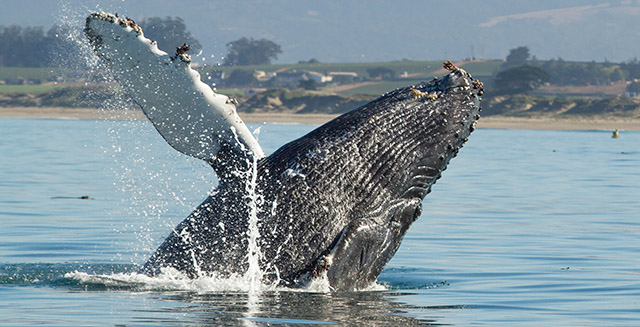 Male humpback whales are spectacular singers, producing complex “songs” that can last for over 15 minutes and may be repeated for hours. A new study led by MBARI biological oceanographer John Ryan shows how the amount of humpback song in Monterey Bay varies over days, months, and even years.

In 2015, MBARI installed an underwater microphone (hydrophone) on the seafloor just outside Monterey Bay at a depth of 900 meters (3,000 feet). Since then, sounds picked up by the hydrophone have been recorded almost continuously. Scientists have already extracted a wealth of information from these recordings, including thousands of hours of humpback songs.

The recent study focuses on the first three years of data from the hydrophone, which were recorded from August 2015 to August 2018. With more than 26,000 hours of broadband audio to analyze, Ryan and his collaborators developed special computer software to help identify all the times that humpbacks were singing during this three-year period. Then they looked closely at when the humpbacks sang and how the proportion of time they spent singing varied over time.

Marine-mammal experts used to think that male humpbacks only sang during courtship and mating, to attract females and/or compete with other males. But newer data shows that the whales also sing while hunting for food and migrating along the coast.

The recent paper shows that humpbacks in the Monterey Bay area mostly sing at night. In fact, during their peak singing season (November through January), humpbacks song was audible about 70 percent of the time during the nighttime hours.

The whales sang much less during the daytime, with the least amount of song (about 30 percent of the time) around noon. Humpback songs around Hawaii and off South America follow a similar daily pattern. The researchers speculate that the whales in Monterey Bay might focus on feeding during the daytime and thus have more time to sing at night.

During each of the three years, the amount of humpback song followed a distinct seasonal cycle. Singing peaked in fall and winter (November through January), then tapered off rapidly in spring. No songs were recorded at all between June and August. Then, in September or October, the amount of song started to increase again.

This seasonal trend in humpback singing is quite different from the times of year when humpbacks are actually observed in Monterey Bay.  As reflected in whale-watching records, humpbacks typically arrive in Monterey Bay in late spring and gather in large numbers to feed during summer and fall.

Starting in December, many humpbacks leave the bay to migrate southward toward breeding areas off the coast of Mexico and Central America. However, over the last five years, an increasing number of humpbacks have been observed feeding in the Bay during the winter months.

The difference in the timing of whale songs and whale sightings is due, at least in part, to the behavior of the whales themselves. Previous studies have shown that male humpbacks simply stop singing during the summer months.

The researchers were also intrigued by large differences in the amount of humpback song from one year to the next. From September 2015 through May 2016, humpbacks sang only about 11 percent of the time. This increased to 16 percent during the same period a year later and about 25 percent during the third year of the study. Perhaps surprisingly, there were lots of sightings of humpbacks within Monterey Bay during the first year, even though there was very little song. This could indicate that humpbacks were in the area, but were not singing very much.

After considering several possible explanations, the researchers suggest that the difference between the three years might be due to large-scale changes in the marine environment. For example, 2015 was the year of the “warm blob,” when ocean temperatures were much higher than normal along the US West Coast. This year also saw lower populations of krill and adult anchovies (the primary food for humpbacks) in Monterey Bay.

The researchers speculate that during 2015, humpbacks in and around Monterey Bay might have had to spend more time and energy looking for food, and thus had less energy for singing. 2015 also saw the most severe toxic algal bloom ever observed on the West Coast, which poisoned marine mammals from California to Washington. The authors suggest that toxins from this bloom might have affected humpbacks, making them less likely to sing.

The recent paper proposes that studying variations in humpback song can help researchers understand the health and behavior of the whales. Learning about short- and long-term variations in humpback song will also help organizations like the Monterey Bay National Marine Sanctuary understand how human-made sounds might affect these huge denizens of Monterey Bay. This, in turn, will help ensure that their beautiful and elaborate songs are not drowned out by human noise. 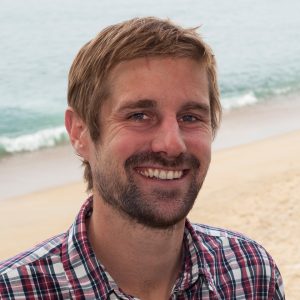 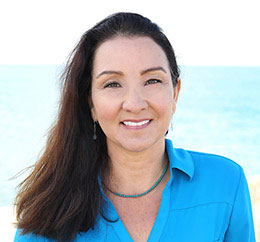 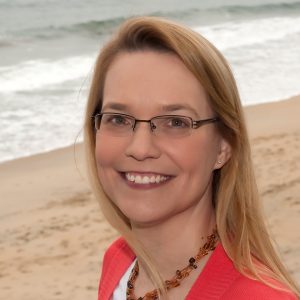