Whale falls—islands of abundance and diversity in the deep sea 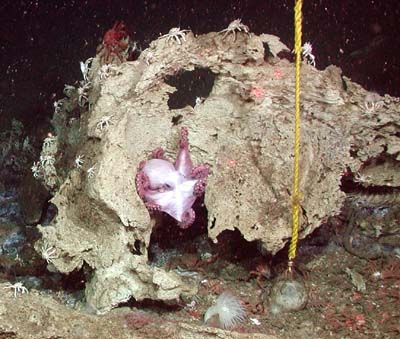 Crabs and an octopus living on the skull of the dead whale in October 2002. The spherical weight and yellow line anchor a homing beacon that that helps researchers find the whale fall on subsequent dives.

In the deep bottom waters of Monterey Canyon, many food webs are sustained by a slow drizzle of organic particles and detritus known as marine snow. But every now and then this rain of debris includes a really big food “particle” in the form of a dead whale. One whale fall can deliver as much organic material as several thousand years worth of marine snow.

In February of 2002, MBARI researchers Robert Vrijenhoek and Shana Goffredi discovered a recent whale fall while exploring the outer portion of the Monterey Canyon with MBARI’s remotely operated vehicle, Tiburon. They returned to the site in October 2002 with Craig Smith, a University of Hawaii professor who has studied whale falls for nearly twenty years.

Based on repeated observations of whale falls off of Southern California, Smith has seen a consistent pattern in the development of biological communities around whale falls. When a large whale dies, its body often sinks directly to the sea bottom, especially if the animal is undernourished. Within days, active scavengers, such as sleeper sharks, rattails, hagfish, and amphipods, converge on the new food source and voraciously remove the flesh from the bones (Smith has estimated consumption rates of 40 to 60 kilograms of flesh per day). In many cases the whale is stripped to the bone in a matter of months.

Within a year after the whale fall, the whalebones and nearby organically enriched sediment typically become infested with huge populations of polychaete worms and unusual crustaceans, as well as molluscs and other invertebrates. Worms often carpet the seabed at densities of up to 45,000 animals per square meter—higher densities than in any other deep-sea environment. Animals in this “enrichment-opportunist” community feed directly on organic material in the whalebones and surrounding sediment. Many of these animals appear to be unique to deep-sea whale falls, and many are new to science. Although the animals appear in extremely large numbers, only a few different species are present, a situation similar to that observed near other concentrated sources of organic material in the marine environment, such as sewer outfalls and salmon pens.

About a year or two after the whale fall, most of the easily digestible organic material has been consumed. However, sulfur-reducing bacteria continue to feed on fats and oils deep within the whale bones. This process gradually releases hydrogen sulfide, which provides the basis for a third-stage, “sulphophilic” (sulfur-loving) whale-fall community.

In some ways, late-stage whale-fall communities resemble communities at deep-sea hydrothermal vents and cold seeps, where chemosynthetic bacteria also form the basis for unusual, self-contained food webs. About ten to twenty percent of the roughly 200 sulphophilic species found at whale falls are also found at underwater hydrothermal vents and cold seeps, respectively. However, the majority of species found in each type of environment are unique. Since many of these organisms are difficult to identify based on their appearance, researchers at MBARI are using genetic and molecular tools to understand the evolutionary patterns among whale-fall communities, and to determine relationships between animals at whale falls, seeps and hydrothermal vents.

Thirty-million-year-old assemblages of fossil clams and whale bones suggest that whale-fall communities have been around at least as long as whales themselves. This persistence is particularly impressive because each whale-fall community is based on a transitory food source. Sooner or later, planktonic larvae of invertebrates at one whale fall must somehow find and colonize a new whale in order to survive. But whale falls might be relatively common. Smith estimates that, based on current whale populations and whale-fall community persistence, dead whales may occur roughly every 5 to 16 km along the seafloor off the Pacific coast of North America. Distances such as these are easily traversed by planktonic larvae.

The recent whale fall in Monterey Canyon is particularly interesting because it lies in deep water (2,891 meters). At this depth mobile scavengers are probably less active, but sulphophilic organisms may appear sooner. Smith and the MBARI scientists are currently analyzing the results of their latest visit, to learn more about the persistence and distribution of these unique benthic communities.