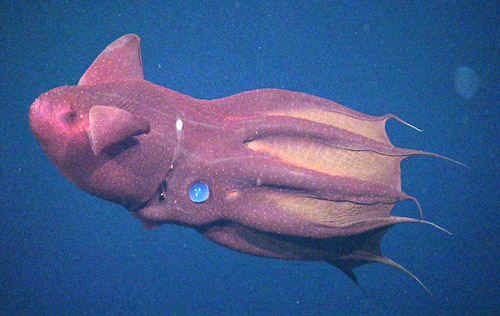 Female squid, octopuses, and cuttlefish end life with a bang. Usually, these soft-bodied cephalopods die after a single, end-of-life reproductive blaze of glory. But scientists have recently learned that one deep-red, foot-long cephalopod breaks this deadly pattern. Vampire squid reproduce over 20 times throughout their lives.

This research was published in the April edition of Current Biology. Henk-Jan Hoving, the lead author of the article is a former MBARI postdoctoral fellow who is now with the GEOMAR Research Center for Marine Geosciences in Germany. Hoving worked closely with MBARI deep-sea biologist Bruce Robison and Vladimir Laptikhovsky of the Centre for Environment, Fisheries, and Aquaculture Science in the United Kingdom.

The researchers counted and measured egg cells in 43 female vampire squid (Vampyroteuthis infernalis) netted offshore of southern California. The ovaries in both adolescent and adult females contained thousands of cells that would normally develop into eggs.

But some adult females also carried batches of roughly 100 larger, developing egg cells. If they had not been caught, these vampire squid would soon have released these growing cells as mature eggs. Female vampire squid release each egg individually into the water column.

The authors of the paper discovered that the reproductive organs of female vampire squid return to a dormant, resting stage between rounds of reproduction—something never before seen in soft-bodied cephalopods. Other cephalopods can produce multiple batches of eggs, but they complete only one reproductive cycle. This pattern of spawning and resting is more common in fish. Deteriorated follicles, the connection points between egg cells and the ovary, proved the adult vampire squid had spawned more than once.

Most cephalopods have high metabolisms that they fuel by hunting energy-rich food like fish and crustaceans. Consequently, they grow very fast and put all their energy into reproducing once at the end of their lives.

Vampire squid have developed their own unique biological traits that work well for them as they drift about 500 to 3,000 meters (2,000 to 10,000 feet) below the surface. In these inky waters, they snack on sinking zooplankton, mucus, and excrement. These low-calorie food sources, along with near-freezing temperatures and low oxygen concentrations, limit animal growth.

“While the vampire squid’s slow mode of life enables them to live in an extreme environment, it seems insufficient to support one big reproductive event that produces enough eggs to guarantee reproductive success,” said Hoving. “Perhaps that’s why vampire squid return to a reproductive resting phase after spawning, and presumably start accumulating energy for a new reproductive cycle.”

The researchers don’t know how long female vampire squid wait between spawning cycles, but Hoving and his coauthors think the females need at least a month between spawning events. With 6,000 to 20,000 eggs to release over their lifetime, the vampire squid may live up to a decade, the team speculated. This fact, along with the recent discovery that some deep-sea octopuses can brood their eggs for up to 53 months, suggests that deep-sea cephalopods have very long life-spans compared to the rest of their tentacled family.