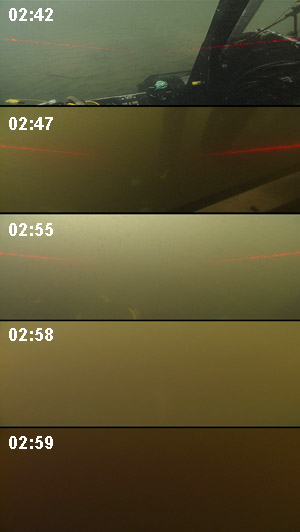 Exploring the deep sea, and especially submarine canyons, is a risky business. The floors of many submarine canyons are periodically scoured by fast-moving underwater avalanches known as “turbidity currents.” In 2013, one of MBARI’s remotely operated vehicles (ROVs) was literally swept away by a turbidity current. Fortunately, the vehicle survived, giving researchers their first close-up view of one of these enigmatic events. The resulting video and data suggest that conceptual models and even textbook descriptions of turbidity currents may need to be revised.

On August 3, 2013 geologists on MBARI’s research vessel Western Flyer were in the middle of a week-long research expedition, studying submarine canyons off the coast of Northern California. Strong winds and rough seas that day forced the researchers to conduct ROV dives within a few kilometers of shore, in the upper reaches of Mendocino Canyon.

After descending the wall of the canyon, the ROV Doc Ricketts reached the canyon floor, about 400 meters (1,500 feet) below the surface, and scientists began using the ROV to collect samples of seafloor mud. As is common near the seafloor in submarine canyons, the water was a bit murky and there was a gentle current flowing down the canyon.

After collecting samples for about two hours, the ROV pilots noticed that the down-canyon current was becoming stronger and stronger. Within about 15 minutes, the water became so muddy that the pilots could no longer see the canyon floor, less than a meter away from the ROV’s video camera. Instruments on the ROV also showed the water around the ROV becoming warmer and less salty.

Up at the surface, the geologists in the ROV control room on board the Western Flyer were elated. They were witnessing something that had never been seen before–a deep-sea turbidity flow. Taking a calculated risk, they asked the ROV pilots to keep the ROV on the seafloor as pulses of turbid water rushed past the vehicle.

It soon became apparent that the layer of turbid water was not just billowing and swirling, but also becoming thicker and thinner over time. Sometimes it enveloped the entire 2.5-meter-tall ROV. Other times it flowed in a thin layer underneath the main video camera.

Eighteen minutes after the first pulse of muddy water hit the ROV, the current surged again. The ROV pilots struggled to regain control as a torrent of muddy water lifted the five-ton ROV off the seafloor and pushed it sideways. Unable to keep the vehicle from being swept downcanyon, the pilots used the ROV’s thrusters to lift the vehicle up from the seafloor and send it toward the surface, where they hoped the currents would be less severe.

Soon after the ROV rose off the bottom, its video cameras revealed a distinct layer of muddy water about three meters (10 feet) thick surging and billowing down the floor of the canyon. Above this dense, muddy layer, the water was less turbid, but a strong, turbulent current still buffeted the ROV. One of the ROV pilots said it was “like flying an ROV in a tornado.”

As the vehicle continued its ascent, even with its thrusters going full-speed ahead it was carried almost 100 meters (330 feet) down the canyon. The pilots were concerned. If the ROV could not escape the raging current, there was a risk that the ROV’s tether might be damaged, cutting power or communications to the vehicle. Fortunately, about 85 meters (280 feet) above the seafloor, the current became weak enough so that the ROV could maintain a stable position in the water.

While the ROV held its position 85 meters above the canyon floor, there was an excited and intense discussion in the ROV control room. Everyone knew that this was a once-in-a-lifetime opportunity. Eventually the pilots agreed to send the ROV back down toward the canyon floor, so that instruments on the ROV could collect detailed data about the water clarity and current speeds at different depths.

The ROV pilots then made a series of attempts to fly back down to the seafloor. But each time, the current became so strong and the visibility so poor that they had to head back up toward the surface. Finally the “ripping current” began to abate and the ROV landed on the seafloor about an hour after the muddy flow first appeared.

Back on the canyon floor, the water was still somewhat turbid, but clear enough so that researchers could at least see the bottom (as well as clumps of kelp rolling downcurrent). Gradually the water around the ROV became clearer, but then another pulse of mud and kelp surged past. After another 20 minutes on the seafloor, the pilots were forced to bring the ROV back to the ship because of increasing winds and seas. Thus ended one of the most exciting geology dives in recent memory.

In the year following the ROV dive in Mendocino Canyon, MBARI Postdoctoral Fellow Esther Sumner worked with geologist Charlie Paull (who led the ROV dive) to analyze all of the data and video from the dive. In October 2014, Sumner and Paull published a paper in Geophysical Research Letters describing and interpreting their observations.

They concluded that the August 3 turbidity current was much more complex than geologists would have expected. Instead of consisting of a single pulse, with a distinct upper boundary and leading edge, this turbidity current had several distinct layers at different depths and multiple pulses that waxed and waned over time.

Specifically, this flow consisted of at least two discrete layers. Near the sea bottom was a fast-moving, turbid layer that ranged from about one half meter to 30 meters (1.5 to 100 feet) thick. Above that was a slower-moving but highly turbulent layer of clearer water that was up to 90 meters (300 feet) thick. Although such layering had been observed in laboratory studies of turbidity currents, this was the first time such layers had been observed in the ocean. The ROV dive also provided first-hand information about how the two layers changed over time.

After analyzing data from the turbidity sensor on the ROV, the researchers discovered that the thicker, “clear” flow actually started 14 minutes before the thin, turbid flow. They suspect that these two flows may have been caused by two separate geological events. Because the second, thinner flow moved much faster than the first flow, it apparently caught up with and then slid underneath the first flow, generating the turbulence that buffeted the ROV as it rose through the water column.

Unlike most textbook models of turbidity currents, the lower dense layer did not flow evenly or smoothly, but consisted of pulses that varied in thickness over time. The researchers were also surprised that the highest current speeds were not at the beginning (head) of the flow, as might be expected, but occurred within the body of the flow.

In their research paper, Sumner and her coauthors point out that their fortuitous observations are not likely to be duplicated any time soon. Most existing oceanographic instruments could not have captured the video or vertical-profile data that was recorded by ROV Doc Ricketts. They also would not have provided information about flows close to the seafloor or short-term variations in the speed or thickness of the flows.

In lieu of sending expensive robots into harm’s way, they suggest that future experiments should include instruments that provide some of this vital information, to confirm the observations made in Mendocino Canyon. Such instruments might incorporate video observations and sensors that can measure turbidity at multiple distances above the seafloor. Paull’s group hopes to incorporate some of these ideas in a major multi-institutional experiment to monitor turbidity currents in Monterey Canyon during Fall 2015.

MBARI YouTube video showing the turbidity current from the perspective of the main video camera on ROV Doc Ricketts: