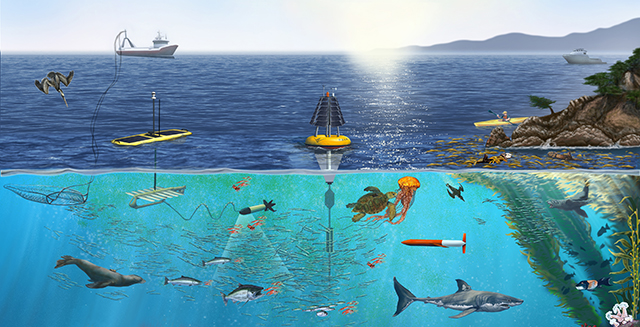 This illustration shows some of the biodiversity in Monterey Bay, as well as a few of the instruments used by MBARI researchers to study biodiversity. Image: Kelly Lance © 2013 MBARI

Many scientists around the world are studying marine biodiversity—the variety of life forms in the ocean. But there is no common standard for how to conduct this research or to compile the data from different studies in different areas. MBARI’s Francisco Chavez, a biological oceanographer, and his collaborators have been developing an international collaboration to fill these gaps and collect biological measurements across diverse marine ecosystems. The researchers discussed their new Pole-to-Pole Marine Biodiversity Observation Network (P2P MBON) this week at the American Geophysical Union Fall 2018 meeting in Washington, D.C.

This pilot project will create an international network of collaborating research institutions, marine laboratories, parks, and reserves in countries along the Pacific and Atlantic coasts of the Americas. All of these groups will be collecting and sharing data that will help them address similar conservation problems and ecosystem goals.

This collaboration is an outgrowth of a five-year, $7 million grant to create a US Marine Biodiversity Observation Network (MBON). As part of this grant, Chavez has been working with more than 20 groups that study and collect information on the Monterey Bay Marine Sanctuary, including its marine life, water chemistry, and ocean currents. “Each group has data in their own data system, and some of these are shared, but not all are,” he said. Chavez undertook the arduous task of persuading these groups to not only share data but also to format them to a common standard.

The plan is for this information, and other ecological and environmental data collected across the US to be made available via a central platform. “We want to combine the available biological data into data systems that use international standards,” Chavez says. “Researchers should be able to take their data and look at it in connection with other datasets, including environmental data.”

The new P2P MBON project will encourage similar data collection activities. In the US, the MBON team launched the MBON portal website as a platform to aggregate and visualize data. Now it’s a treasure trove of maps of protected areas, sites of harmful algal blooms, turtle nesting spots, distribution of seafloor animals, and much more. This online interface enables researchers to sort through species-specific data, habitat, and location, in addition to environmental data, and graph results.

“The hope is for all the data to be integrated into this platform one day,” Chavez says. “But the tools will become more useful when we put in more data.”

For Chavez, the biggest challenge in the US MBON project has been finding better ways to measure biodiversity. “The technology we are mostly focusing on is called environmental DNA (eDNA),” Chavez said. Using floating bits of DNA from shed skin, urine, and feces of animals, scientists can assess what animals are in the ocean. Chavez, in fact, just returned from the first national conference on eDNA.

Such technologies could be shared with other countries as part of the P2P MBON project. These efforts to develop and share tools and technology will help meet the goals of the international Convention on Biological Diversity and the United Nation’s sustainable development goals for conserving and using marine resources sustainably.

“This is the beginning of something, Chavez said, “and you always struggle at the beginning.” He continued, “The international network is growing slowly and as we get more recognition and people see how useful it is, MBON will continue to grow. But that will take time and patience.”