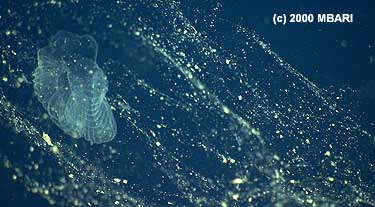 This photograph, taken by MBARI’s remotely operated vehicle Tiburon, shows a close-up view of a larvacean’s inner filter. A larger large outer net filters out coarse particles. The larvacean itself is too small to be seen in this image. Image credit: (c) 2000 MBARI

MOSS LANDING—One of the biggest questions in modern oceanography is how animals in the deep sea get enough to eat. Marine biologists at the Monterey Bay Aquarium Research Institute (MBARI) recently published a paper that helps answer this question, at least for animals that live on the deep seafloor off the coast of Central California. After analyzing hundreds of hours of deep-sea video, Bruce Robison and his colleagues found that “sinkers”—the cast-off mucus nets of small midwater animals called larvaceans—are a significant source of food for deep-sea organisms. They describe their findings in the June 10, 2005 issue of Science magazine.

Far from being a deserted place, the deep seafloor is inhabited by a wide variety of swimming, crawling, and burrowing animals. Since plants cannot grow more than few hundred meters below the surface, most deep-sea animals either eat their neighbors or feed on material (detritus) that drifts down from above. For decades oceanographers have used funnel-like collectors called sediment traps to measure how much food sinks down to the seafloor in the form of detritus. They have also estimated the amount of food consumed by animals on the seafloor. At many locations, they have found that the amount of food collected in sediment traps is significantly less than the amount of food being consumed by animals on the seafloor.

Over the years, researchers have suggested a number of possible additional food sources for deep-sea organisms that might make up for the lack of food observed in sediment traps. Some researchers have theorized that additional food washes into the deep sea from shallow coastal areas or river plumes. Other scientists have suggested that algal blooms or the sunken carcasses of whales and other large animals could account for the missing food. Robison believes that, although these sources may be important in some areas, they are not persistent enough or substantial enough to account for what is apparently a world-wide phenomenon.

Enter the lowly larvacean. Larvaceans are small, tadpole-like animals related to the tunicates or “sea squirts” found in tide pools. The “giant larvacean” of the genus Bathochordaeus is only about 50 mm (two inches) long, but is widely distributed, occurring in both the Pacific and Atlantic Oceans. Like most larvaceans, it feeds on tiny food particles in the surrounding seawater.

A giant larvacean lives inside two net-like mucus filters, which are collectively called its “house.” The outer filter traps coarse particles, and can be up to one meter (three feet) across. The inner filter is slightly more dense, and traps small particles that the animals eats. The larvacean constantly pumps water through both filters, which typically become clogged after about 24 hours of use. At this point the larvacean abandons its house and swims off to create a new one. The cast-off larvacean house eventually deflates like a punctured balloon and sinks rapidly toward the seafloor, carrying large amounts of detritus as well as tiny animals that colonize the mucus.

MBARI scientist Bruce Robison had observed hundreds of these cast-off larvacean houses (commonly known as “sinkers”) while exploring the waters of Monterey Bay using MBARI’s remotely operated vehicles (ROVs). After seeing how common sinkers were, Robison wondered if they might be delivering significant amounts of food (in the form of organic carbon) to the deep sea. As he explains, “When it became apparent that sinkers might be important carbon sources, we went around asking other oceanographers if they had seen these things [sinkers] in their sediment traps. It turns out that, although sinkers are relatively common, the odds of a sinker even hitting a sediment trap in the open ocean are extraordinarily small. In addition, sinkers often simply disintegrate when they contact a solid object. So either the scientists were not seeing sinkers at all, or if they did see them, it was in the form of a big glob in the bottom of the sediment trap, which they would typically throw out, assuming it was contamination.”

To estimate how much carbon these sinkers might be delivering to the seafloor, Robison first needed to find out how common they were. For ten years (from 1994-2003), he and his research team had been conducting monthly surveys of midwater organisms at ten different depths in Monterey Bay using MBARI’s ROV Ventana. As part of their study of sinkers, the scientists pored over hundreds of hours of video taken during these surveys, counting both inhabited larvacean houses and sinkers themselves.

Knowing the volume of water that was observed during each midwater survey, Robison and coauthors Rob Sherlock and Kim Reisenbichler were able to estimate the overall abundance of sinkers in Monterey Bay. Over the ten-year period, they observed an average of about four sinkers per day for every square meter of deep seafloor. In other words, a patch of seafloor the size of a large dinner plate might receive carbon from about 100 sinkers over a year’s time.

To complete their study, the scientists also needed to know how much carbon each sinker transported to the seafloor. But first they had to collect some sinkers. Since the sinkers could not be collected individually using sediment traps, the team relied on MBARI’s skilled ROV pilots to do the job. Catching bits of drifting mucus using a three-ton underwater robot was no easy feat. As Robison put it, “We collected more than a hundred of these things, and every one of them was a major challenge. About one in four attempts was successful. The patience and skill of those pilots was just amazing.”

Back in the lab, the researchers carefully measured the amount of organic carbon in each sinker. Finally, by multiplying the number of sinkers reaching the seafloor times the average amount of carbon per sinker, they were able to estimate how much carbon the sinkers were carrying to the seafloor. To their surprise, Robison and his colleagues found that sinkers were delivering almost as much carbon as was the detritus being collected in sediment traps. They had found an additional food source that was more than adequate to feed all those hungry deep-sea animals.

These findings may seem esoteric, but they have global implications. The inability to account for all the carbon reaching the seafloor has been a major concern not only to oceanographers but also to some climate modelers who are trying to understand global warming. The global carbon cycle is like a complex jigsaw puzzle with many interlocking pieces. Robison’s research may supply a piece of the puzzle that has long been missing.