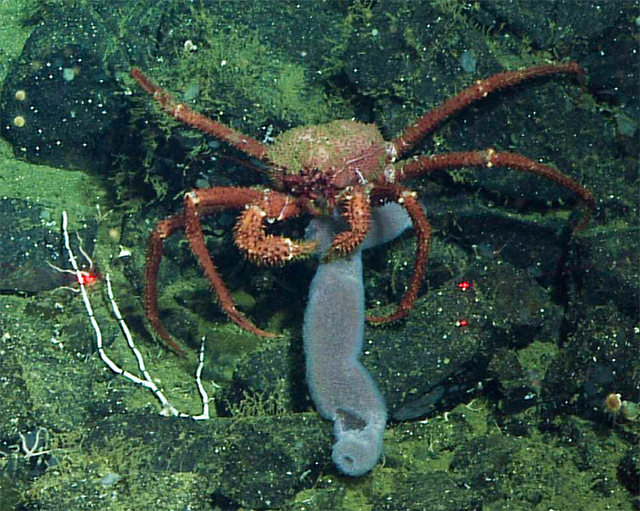 We dropped lines and headed out into the thick fog at just before 7:00 a.m. on this Friday the 13th. Hopefully the fog isn’t an omen of some sort. The Western Flyer headed for Sur Ridge, a rocky undersea ridge about 65 kilometers (40 miles) southwest of Moss Landing. The swell from a large North Pacific storm slowed our progress somewhat and we arrived as we finished lunch. We got to work with science operations right away. First, we deployed two  “free vehicles” over the stern and released them so that they sink to the bottom uncontrolled. They drift a bit in the currents, but typically sink straight to the bottom. One is a frame holding our benthic respiration system (BRS), which measures oxygen consumption by deep-sea animals. The second is a time-lapse camera, the “coral-cam,” a new part of our “coral observatory” we will use to observe deep-sea corals and sponges. We’re gathering the images to understand more about the pace of life in this deep-sea ecosystem, what species wander through, and how coral behavior and interactions with other species are related to oceanographic currents and food input from surface waters. The camera will capture an image every hour for a year.

We then launched the ROV and sent it toward the bottom. In surface waters we saw thousands of pyrosomes—tubular, pelagic colonial tunicates—more than I’ve noticed in 20 years of ROV diving. They make a living by filtering phytoplankton from the water, and can reach lengths over 10 meters (32 feet). These were about 15 centimeters (roughly six inches) long. Forty minutes later the ROV arrived at the bottom near 840 meters (~2,750 feet) depth, and we began working. First, we loaded the benthic respiration system with bamboo coral. Using the ROV manipulator arm, we collected small branches of bamboo corals (Isidella sp.) and placed them in chambers where oxygen consumption is measured. Next was the coral-cam. We found it using a navigation beacon it has to ping its location.

We picked it up using the ROV and carried it to a rocky ledge where we plan to observe a group of corals and sponges. We connected its communications cable to the ROV so that we could adjust settings on the camera for the best image, made a few adjustments, and initiated its operation. We then disconnected and had the ROV head toward the surface. It will be exciting to see what happens in the coral communities over time. We also noticed many pyrosomes had sunk to the bottom. These pyrosomes are a food feast for a variety of seafloor species.  Several crabs were observed consuming them. Almost all deep-sea life depends upon organic debris sinking from the surface, but food fall events like these may be a rapid way for food to reach the deep sea.