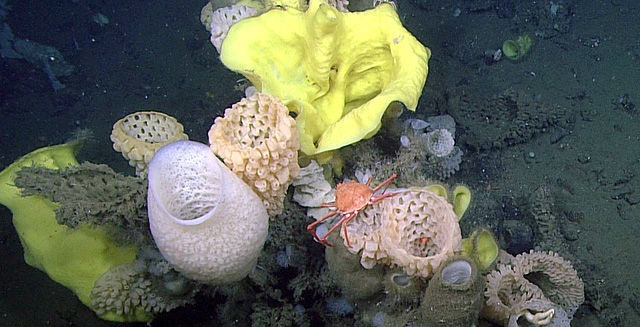 A crab and several different types of sponges inhabit this rock on Sur Ridge. Image © 2017 MBARI

Unlike shallow water coral reefs that are accessible in most tropical reef areas, deep-sea corals are typically remote and inaccessible due to their great depth, often hundreds to thousands of meters beneath the surface, as well as far from shore. So, even though deep-sea coral ecosystems occur in deep rocky habitats across the world ocean, most are rarely seen by humans. A few years ago, scientists Andrew DeVogelaere from the Monterey Bay National Marine Sanctuary (MBNMS) and I discovered thriving and diverse deep-sea coral and sponge communities only 64 kilometers (40 miles) from Moss Landing on the Central California coast at a site called Sur Ridge, a discovery resulting from a bet between these two friends.

For years we worked together on various projects and had long speculated about the type of seafloor biological communities we might find at Sur Ridge. Although there had been no sampling of the ridge, Andrew thought there might be some deep-sea corals, but I thought the ridge was likely to be covered in mud, preventing corals from thriving there. A few years ago, we were on a cruise to study ecological changes associated with a sunken shipping container that had fallen from a ship during a storm and found by chance during an ROV survey by my research team. After several days of ROV dives to study the container, we had an extra day of ship time and decided to explore Sur Ridge­—to settle the bet, but more importantly, to learn something about another region of the Monterey Bay National Marine Sanctuary.

Using the best maps available at the time, we chose the steepest section of the ridge to start, hoping there was some exposed rock formations. Watching the video monitors as the ROV landed on a muddy bottom in 1,250 meters (4,101 feet) water depth, it initially looked like the corals were absent. But when the ROV moved toward the steep slope, the ROV ran, almost literally, into a rock wall—covered with colorful corals and sponges. Happily, DeVogelaere won the bet, but we all win due to the relative ease in studying this special site. Surveys over the past few years have led to Sur Ridge being designated as a Sanctuary Ecologically Significant Area (SESA).

April 19 to April 24, 2019 – The Benthic biology and ecology group is heading out to study deep-sea communities in three different environments.