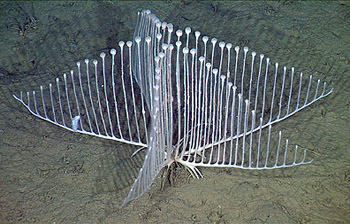 Ten thousand feet below the ocean’s surface, the seafloor is a dark, desolate, and dangerous place where even the most benign-looking creatures can be deadly predators. Recently, a team of scientists discovered an unlikely new carnivorous species— the harp sponge (Chondrocladia lyra).

C. lyra is called the harp sponge because its basic structure, called a vane, is shaped like a harp or lyre. Each vane consists of a horizontal branch supporting several parallel, vertical branches. But don’t let the harp sponge’s whimsical appearance and innocent sounding name fool you, it’s actually a deep-sea predator.

Clinging with root-like “rhizoids” to the soft, muddy sediment, the harp sponge captures tiny animals that are swept into its branches by deep-sea currents. Typically, sponges feed by straining bacteria and bits of organic material from the seawater they filter through their bodies. However, carnivorous harp sponges snare their prey—tiny crustaceans—with barbed hooks that cover the sponge’s branching limbs. Once the harp sponge has its prey in its clutches, it envelops the animal in a thin membrane, and then slowly begins to digest it.

Using MBARI’s remotely operated vehicles (ROVs) Tiburon and Doc Ricketts, researchers collected two sponges and made video observations of ten more. The first harp sponges that the scientists found had only two vanes. However, additional ROV dives revealed sponges with up to six vanes radiating out from the organism’s center. Scientists believe the harp sponge has evolved this elaborate candelabra-like structure in order to increase the surface area it exposes to currents, much like sea fan corals.

The harp sponge’s unusual shape and exposure to currents may also help it to reproduce more effectively. The swollen balls at the tip of the sponge’s upright branches produce packets of sperm. These sperm packets are released into passing currents and are captured on the branches of other nearby sponges. The sperm then works its way from the packets into the host sponge to fertilize its eggs. As the fertilized eggs mature, these contact sites swell up, forming bulges part way up the host sponge’s branches (see photo).

It has been less than twenty years since scientists first discovered that sponges could be carnivores. Since then, marine biologists have discovered dozens of new carnivorous species. In fact, all the members of the harp sponge’s family Cladorhizidae—including the ping pong tree sponge (shown below)—are carnivores.

The deep seafloor can be a very inhospitable place. It is cold, dark, and resources are often scarce. The harp sponge is an extraordinary example of the kind of adaptations that animals must make in order to survive in such a hostile environment.

Video about the harp sponge from MBARI’s YouTube Channel: