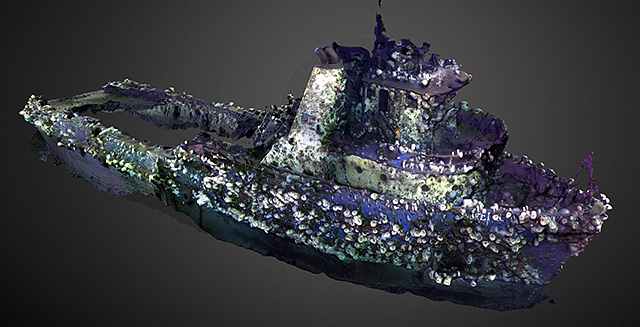 “Hey come on guys, the American Heritage is sinking! We are going after it.”  These were the words Knute Brekke, chief pilot of one of MBARI’s remotely operated vehicles (ROVs), heard in the middle of the night 23 years ago.

It was a night of mayhem. As soon as they heard the news, Brekke and his co-workers at American Pacific Marine, the diving and ROV company that owned the American Heritage, began to gather gear and cranes to salvage the sinking ship. But they never left port.  It was too late. The ship had sunk.

“The propeller shaft separated and there was water coming through a six-to-eight-inch hole in the engine room. And down it went,” said Brekke. Fortunately, before the ship sank, the Coast Guard managed to rescue everyone on board.

On May 4, 1995 the Los Angeles Times reported the incident and pinned the location of the sunken ship about 13 kilometers (eight miles) south of Malibu, in Santa Monica Bay.

Flash forward to 2008—MBARI researchers were using an underwater robot to map around Santa Monica Canyon and saw something unusual on the seafloor. In the end, however, the researchers decided it was just bad data. “They called it an anomaly,” said Brekke.

In May 2018, MBARI researchers returned to Santa Monica Bay and surveyed the same spot as part of a larger seafloor mapping project. This time, the maps clearly revealed a 60-meter-long shipwreck lying on the seafloor almost 700 meters (2,300 feet) below the ocean surface.

Four months later, in September 2018, MBARI geologist Charles Paull led a research expedition using the research vessel Western Flyer and ROV Doc Ricketts to investigate faults and submarine canyons in this same area. But they were also on the lookout for the mysterious sunken ship.

Brekke was one of the pilots operating the ROV during this expedition. When he first looked at the seafloor maps of the area, Brekke was immediately drawn to the shipwreck. It looked like a typical oil-field supply boat that might have been servicing oil rigs between Los Angeles and Point Conception.

His curiosity piqued, Brekke found a nautical chart and drew a line along the route the sunken supply boat should have taken during its last passage. The line passed right over the position of the wreck shown on the sonar. “I may know what boat this is,” Brekke exclaimed.

On the last day of Paull’s cruise, the researchers were conducting an ROV dive barely 600 meters from the shipwreck site. Having a little extra time, they decided to dive on the wreck.

Brekke was operating the ROV when its video cameras revealed a giant object covered in sponges. He and the other pilots flew the ROV around the wreck, from bow to stern, up and down, for three hours. Although poor visibility and loose ropes and cables prevented the ROV from getting too close to the wreck, the pilots eventually spotted the letters A, M, E, and R on the bow of the boat. “That’s it. It says American Heritage,” said Ben Erwin, Brekke’s copilot. The company emblem on the smokestack confirmed that the ship belonged to American Pacific Marine.

Mesmerized by the shipwreck, Erwin decided to create a three-dimensional (3D) rendering of it. Over the next few months, he pieced together thousands of still images of the shipwreck that he had extracted from the ROV video. After weeks of heavy number crunching, Erwin posted the final product on the Sketchfab website. Now anyone can examine the wreck of the American Heritage on the seafloor in the deep waters of Santa Monica Bay.

You can view Ben Erwin’s 3D model of the wreck of the American Heritage below (courtesy of Sketchfab). Some parts of the wreck are missing because they were not clearly visible in video of the wreck taken by MBARI’s remotely operated vehicle Doc Ricketts. 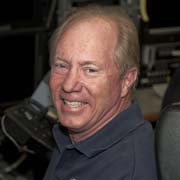