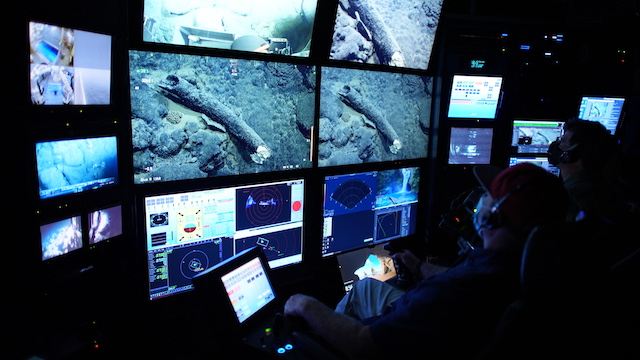 The ocean’s dark depths hold many secrets. For more than three decades, MBARI has been exploring the deep waters off the coast of central California. During an expedition aboard the R/V Western Flyer in 2019, ROV pilot Randy Prickett and scientist Steven Haddock made a peculiar observation.

While exploring a seamount located 300 kilometers (185 miles) offshore of California and 3,070 meters (10,000 feet) deep, the team spotted what looked like an elephant’s tusk. Only able to collect a small piece at the time, MBARI returned in July 2021 to retrieve the complete specimen. Now, Haddock and researchers from the Paleogenomics Lab, UC Santa Cruz Genomics Institute, and the Department of Earth and Planetary Sciences at the University of California, Santa Cruz (UCSC), and the Museum of Paleontology at the University of Michigan (U-M) are examining the tusk.

The researchers have confirmed that the tusk—about one meter (just over three feet) in length—is from a Columbian mammoth (Mammuthus columbi). The cold, high-pressure environment of the deep sea uniquely preserved the tusk, giving researchers the opportunity to study it in greater detail. Computed tomography (CT) scans will reveal the full three-dimensional internal structure of the tusk and more information about the animal’s history, such as its age.

“You start to ‘expect the unexpected’ when exploring the deep sea, but I’m still stunned that we came upon the ancient tusk of a mammoth,” said Haddock. “We are grateful to have a multidisciplinary team analyzing this remarkable specimen, including a geochronologist, oceanographers, and paleogenomicists from UCSC; and paleontologists at the University of Michigan. Our work examining this exciting discovery is just beginning and we look forward to sharing more information in the future.”

“This specimen’s deep-sea preservational environment is different from almost anything we have seen elsewhere,” said University of Michigan paleontologist Daniel Fisher, who specializes in the study of mammoths and mastodons. “Other mammoths have been retrieved from the ocean, but generally not from depths of more than a few tens of meters.”

Fisher and his U-M Museum of Paleontology colleagues will use their knowledge of the structure and composition of mammoth tusks to analyze CT scans of the specimen. The other members of the U-M team are Adam N. Rountrey, Michael D. Cherney, Ethan A. Shirley, and Scott G. Beld.

A team of researchers from UCSC’s Department of Earth and Planetary Sciences will investigate when and how the tusk may have arrived deep offshore.

The team believes it could be the oldest well-preserved mammoth tusk recovered from this region of North America. Dating of the tusk is being done by the UCSC Geochronology Lab led by Terrence Blackburn, associate professor of Earth and planetary sciences. Blackburn analyzed radioisotopes to show that the tusk is much more than 100,000 years old. “Our age estimate on the tusk is largely based on the natural radioactive decay of certain uranium and thorium isotopes imparted to the tusk from the ocean. If the tusk had been found on land, deciphering its history would not be as straightforward,” said Blackburn. Christopher Edwards and Patrick Drake will examine the oceanographic currents to better pinpoint where the tusk originally came from.

Researchers at the UCSC Paleogenomics Lab led by Beth Shapiro, professor of ecology and evolutionary biology, plan to sequence the ancient DNA from the specimen, which could provide valuable insight about how mammoths colonized North America. Katherine Moon, a postdoctoral researcher in Shapiro’s lab, accompanied Haddock on the July cruise to retrieve the complete specimen.

Shapiro and Moon will recover ancient DNA preserved within the matrix of the tusk, which they will compare to DNA that has already been recovered from other mammoths. “Specimens like this present a rare opportunity to paint a picture both of an animal that used to be alive and of the environment in which it lived,” said Shapiro. “Mammoth remains from continental North America are particularly rare, and so we expect that DNA from this tusk will go far to refine what we know about mammoths in this part of the world.”

Other collaborators include David Clague, Lynne Christianson, and Shannon Johnson from MBARI, Ashley Spicer and Kelly Carrothers from the California Department of Fish and Wildlife, and Kira Mizell from the United States Geological Survey (USGS).

The ocean represents 99 percent of the space where life can exist on this planet and yet we still know very little about it. As interest in exploiting the deep sea by mining for valuable metals has grown—with the potential to place many marine animals in harm’s way—this surprising discovery, hidden on the seafloor for eons, serves as a fragile reminder of the many remaining mysteries worthy of our protection. 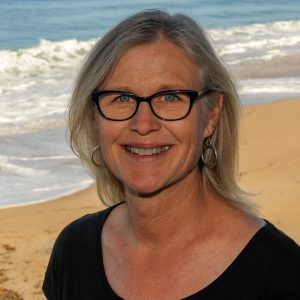 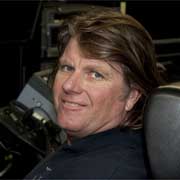