Researchers discover carnivorous sponges that make their own light 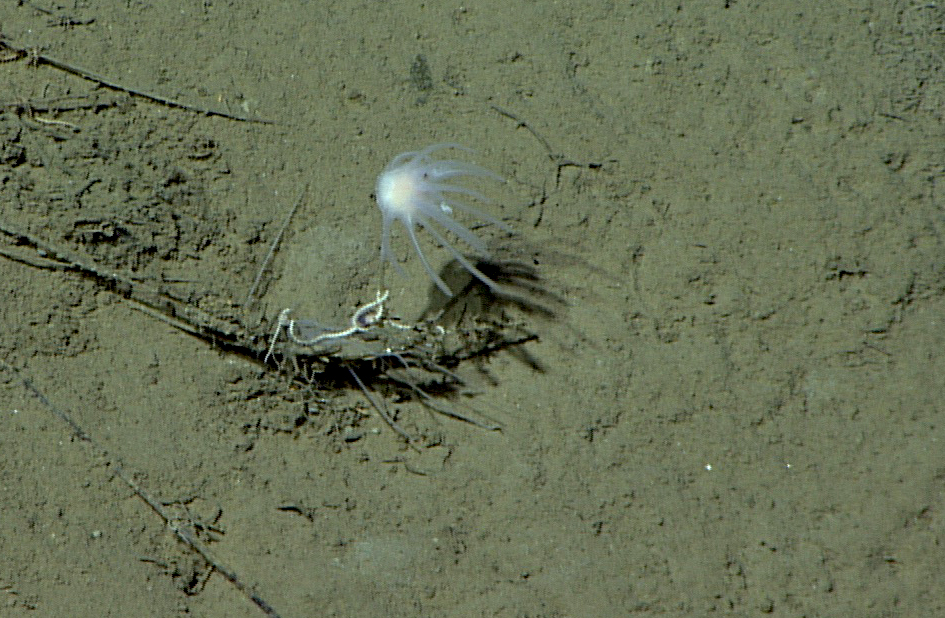 This undescribed species of carnivorous sponge, in the family Cladorhizidae, was collected by ROV Doc Ricketts 4,000 meters deep off the coast of Monterey Bay. Researchers were surprised to document the first evidence of luminescence in a sponge when they looked at it closely in the lab.

In 2017, MBARI researchers were using a remotely controlled robot to explore the dark depths 4,000 meters (13,100 feet) beneath the sea surface when they came upon an animal that looked like a small stalk with a white blob on top, trailing hair-like filaments, and anchored by root-like structures in the muddy seafloor. After bringing the animal up to the surface, the researchers dimmed the lights in their laboratory and gently touched it. The animal emitted an eerie blue-green glow. The scientists were surprised and delighted—they had found a luminous deep-sea sponge.

“When we sampled the first sponge, the team was actually looking at another animal on it (a benthic ctenophore). The sponge was left in the sampler after everybody picked animals of interest. I was working on the benthic list of bioluminescent organisms at that time and tested everything I could. I decided to try this one; we had no idea what it was at that time. When I stimulated it, it was clearly bright and lasting for several seconds. I stimulated it several times on different parts before talking about it to the rest of the team,” said Séverine Martini, lead author of the study and researcher at the Mediterranean Institute of Oceanography, Marseille, France.

Although many deep-sea animals are known to glow, sponges have long been considered an exception. Over the past 100 years, a few marine biologists have found sponges that appeared to be luminous, but it turned out that the sponges in question contained glowing bacteria or had consumed or been colonized by other animals that glowed.

The MBARI researchers, led by former MBARI Postdoctoral Fellow Séverine Martini and University of California, Santa Cruz, graduate research assistant Darrin Schultz, recently published a paper about their discovery of glowing sponges in Frontiers in Marine Science. Working with MBARI marine biologists Lonny Lundsten and Steve Haddock, they showed not only that the deep-sea sponges glowed but that they contained the chemicals necessary to make light within their bodies.

A surprisingly large number of deep-sea animals gain the chemicals required to emit light by consuming other glowing organisms. The researchers found evidence that this sponge used coelenterazine to make its light—the same molecule used by a broad diversity of marine organisms from jellyfish to squid.

“This finding is pretty spectacular evolutionarily in that we don’t know of any other sponge that has been shown to use coelenterazine, let alone clearly shown to be bioluminescent. This means that the sponges either evolutionarily co-opted one of their enzymes to function as a bioluminescent protein, acquired the ability to bioluminesce by gathering the chemicals and enzymes through their food, or acquired the genes from another organism long ago during their speciation,” said Schultz.

The glowing sponges are members of a new species and haven’t even been named yet. MBARI researchers had observed them living on the deep muddy seafloor for decades but had never collected and studied them until recently.

Between 2017 and 2019, the team used MBARI’s remotely operated vehicle (ROV) Doc Ricketts to collect six of the undescribed sponges from a research site about 200 kilometers (over 100 miles) offshore of the Central California coast. The cameras on the robot were not sensitive enough to detect any light coming from the sponges. Still, after Martini’s surprising discovery in the darkened laboratory on board the ship, she was able to document the reaction using a special low-light video camera.

As the researchers wrote of their discovery, “After gently touching each individual sponge with a gloved hand or round-pointed forceps, we observed blue-green bioluminescence localized around the point of mechanical depression. The light lasted for five to ten seconds and was easily visible to the naked eye. The mass at the top of the sponge, its filaments, and its stalk all glowed when touched, but the root-like rhizoids did not.”

The researchers also exposed the sponge’s tissue to various chemicals to see how these would affect the sponge’s ability to glow and test that the light was not caused by bacteria or other animals living within the sponge’s tissues. In their paper, the scientists note they won’t be able to say for certain that the sponges produce their own light until they can search the sponges’ genes for signs of bioluminescence-related proteins.

“After Séverine identified that the sponges were bioluminescent, it took us several years and three research expeditions to piece together what was going on biochemically. During each cruise, we could only collect two or three sponges, and I ran each sponge through various biochemical tests to learn more about its bioluminescence. In the end, all of the evidence pointed toward the sponge not using a bacterial symbiont for bioluminescence but using chemicals and enzymes from its own cells to produce light. In the future, we will determine if the genes required for bioluminescence are encoded in the sponge genome, and will use that information to learn more about how this species evolved the ability to make its own light,” said Schultz.

Based on DNA sequencing, the researchers identified the sponge as a new species closely related to other carnivorous deep-sea sponges. In fact, this type of sponge, though unnamed, seems to be relatively common, albeit at the crushing depth of 4,000 meters (13,100 feet). Data from MBARI’s 30-year database of ROV observations suggest that MBARI researchers have seen similar sponges on the seafloor, from the Canadian Arctic to the Gulf of Mexico, and even around the Hawaiian Islands.

One big, but as yet unanswered, question is how the sponges benefit from creating their own light. The fact that the new sponges only glow when physically disturbed suggests that the glow might serve to distract or discourage predators. However, another possibility is that the sponges might glow to attract prey. Most sponges pump water through their bodies and filter out tiny particles for food. But in some parts of the deep sea where drifting particles are scarce, many deep-sea sponges (including close relatives of the newly discovered glowing sponge) have evolved into carnivores, capturing small animals on tiny, needle-like hooks.

This discovery gives us another glimpse into the strange inhabitants of the deep sea and their adaptations to this unique but vast and virtually unexplored habitat.