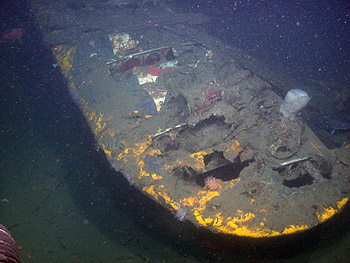 On September 17, 2006, researchers from NOAA’s National Marine Sanctuary program and Monterey Bay Aquarium Research Institute (MBARI) will embark on an expedition off the Big Sur coast to conduct an archaeological investigation at the submerged wreck site of the rigid airship USS Macon, the nation’s largest and last U.S.-built, rigid lighter-than-air craft.

The 785-foot USS Macon, a U.S. Navy “dirigible,” and its four Curtiss F9C-2 Sparrowhawk aircraft were lost on February 12, 1935 during severe weather offshore of Point Sur, California, on a routine flight from the Channel Islands to its home base at Moffett Field. The wreckage of the USS Macon provides an opportunity to study the relatively undisturbed archaeological remnants of a unique period of U.S. aviation history.

“A key mandate of the National Marine Sanctuary program is to explore, characterize, and protect submerged heritage resources and to share our discoveries with the public,” said Robert Schwemmer, West Coast maritime heritage coordinator for NOAA’s National Marine Sanctuary Program and co-principal investigator for the expedition. “The USS Macon is a top research and stewardship priority in the Monterey Bay Sanctuary and we encourage the public to join in on the adventure via the sanctuary’s web portal.”

During the five-day expedition, researchers working from MBARI’s research vessel Western Flyer will deploy the remotely operated vehicle (ROV) Tiburon and record the visual wreckage of the airship and aircraft through high-definition videotape and still imagery that will be used to create a photo-mosaic of the debris fields. A second objective of the mission is to identify and record specific features in more detail, including newly discovered artifacts, and assess their condition. The expedition will aid in the assessment of the USS Macon for eligibility to the National Register of Historic Places.

“The deepwater wreck site of the USS Macon is a unique time capsule of a bygone era,” said Chris Grech, MBARI deputy director for marine operations and co-principal investigator for the expedition. “Our advanced underwater technology in robotics, vessel design, cameras and computer imaging will allow us to better survey and document this nationally significant archeological site, as well as capture for historians and the public a permanent record in a high resolution photo-mosaic.”

Starting September 18, 2006, students and the general public can share the expedition’s discoveries through Monterey Bay Sanctuary’s web site. Daily logs, live videos of the expedition, and archived video clips will be available on the sanctuary program’s web site and through the OceansLive web portal.

A public lecture series on the USS Macon also will be launched this month, beginning with a presentation on September 15 at the Monterey Maritime and History Museum. Free USS Macon memorabilia to commemorate the expedition will be available to those attending the lecture series.

The expedition is designed to build upon information gathered by the U.S. Navy and MBARI, which first documented the aircraft’s remains during expeditions in 1990 and 1991. A more recent site survey was completed in May 2005 utilizing side-scan sonar deployed from the NOAA research vessel McArthur II . This phase I expedition, in partnership with NOAA, MBARI, U.S. Geological Survey, and Moss Landing Marine Laboratories, identified what is believed to be undocumented wreckage that may have been missed during the 1990 and 1991 surveys and will be investigated during the September expedition.

A press conference will be held at the MBARI campus in Moss Landing, California at 10 a.m. on Wednesday, September 27, 2006. Researchers at the conference will present the September 2006 expedition’s findings to the news media. Still and video images from the cruise will be available as well.

This color-corrected underwater photograph shows portions of some of the USS Macon’s fuel tanks. The circular baffles prevented the fuel from sloshing around while the airship was in flight.