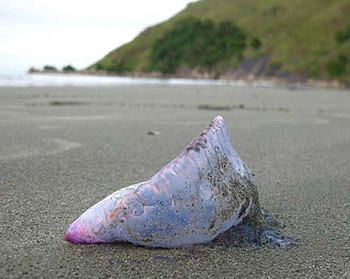 Suppose you’re walking along the beach and you see a jellyfish washed up on the sand. Then you see another and then another. It’s a jellyfish invasion! What do you do? Who do you call? If MBARI researcher Steve Haddock has his way, you’ll take some photos and maybe a few notes, and send them in to his new Jellywatch website (www.jellywatch.org), to share your discovery with the world.

Haddock’s new website combines marine biology and social networking to create a resource that both scientists and ocean lovers can appreciate. Visitors can not only post their sightings and photos, they can also compare their sightings with those of beachcombers around the globe.

The Jellywatch website was created by Haddock and two summer interns, Katherine Elliott and Alison Case. According to Haddock, “People have been talking about jelly blooms increasing around the world, but we don’t really have a lot of data on this. So it’s hard to know how localized these events are. That’s why we created this website. The idea is that everyday people can get involved in a real ocean research project. Their eyes are important instruments in this study.”

In addition to tracking jelly blooms, the Jellywatch site also allows visitors to report other unusual ocean events such as red tides or mass strandings of other marine creatures. Haddock and his fellow researchers are also interested in historical observations of jelly strandings. “The historical record is really hard to reconstruct” says Haddock. He also encourages people to report the lack of jellies at times or places when they might be expected. “No-jelly observations are useful as well,” Haddock says.

Although a few other jelly-tracking sites exist, Haddock’s is the only site that provides world-wide coverage and allows visitors to both post their data and see other’s data as well. This sharing of data is critical, according to Haddock. “It shows people that the data won’t just end up in some dusty archive where no one can find it.”

Designed with input from the Monterey Bay Aquarium, the Jellywatch site is kid friendly and very easy to use. Visitors can report sightings anonymously or register to simplify the entry of multiple observations. Anonymous observations are reviewed before being posted.

Haddock hopes that schoolkids will use the site both to report sightings and to create school research projects. “The idea is that this is a place for two-way communication,” Haddock says, “similar to the social networking sites like Facebook, but focused on citizen science.”

After less than two months of operation, the Jellywatch site already features dozens of sightings from British Columbia to South Africa. As Haddock jokes, “I think we have sightings from every continent except Antarctica… I’ll have to work on that one.”

Among other things, Haddock plans to use data from the Jellywatch data in an ongoing collaborative study of jellyfish blooms around the world. This large-scale jelly-bloom project, sponsored by the National Center for Ecological Analysis and Synthesis (NCEAS), is designed to identify world-wide trends in jellyfish blooms by combining the results of many individual studies.

Although MBARI is hosting the Jellywatch web site, Haddock is presently seeking outside funding to maintain and expand the site. In the short term, however, he wants to get as many people as possible to visit the site and contribute observations. Haddock hopes the Jellywatch site will become “self propagating” on the Internet, as more and more people find it and share their discoveries with others.

He is also printing Jellywatch stickers that will be given out at dive stores, beach resorts, and other coastal businesses.

Jellywatch programmer Elliott enjoyed creating the Jellywatch site so much that she has continued to work on the site even after her internship. She says, “I like the fact that you can see a Google map of all the sightings and click on any of them to find out what people saw.” She continues, “Before working on this site, I hadn’t realized the dizzying biodiversity of jellies and other deep-sea creatures. Now I’m really looking forward to watching the site fill up with data and observations from around the world.”