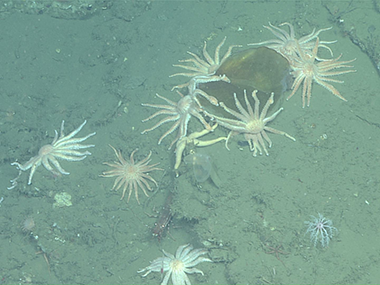 The common sea nettle or Chrysaora being eaten by Rathbunaster

We are guest scientists from GEOMAR Helmholtz Centre for Ocean Research Kiel and are very happy to join the MBARI midwater expedition on the Western Flyer. During this week, we have been documenting and collecting a range of midwater animals. Such in situ observations provide much more than an image alone. For example, by studying animals in their natural habitat, associations between organisms can be observed. A good example of such an association we came across early in the cruise and involved the presumably commensalistic association between the large medusa Deepstaria enigmatica and the giant isopod Anuropus. Repeated observations of this large medusa show that there is always a single isopod inside the bell of Deepstaria. Many gelatinous species are hosts for amphipod symbionts, and on this cruise, we also found hyperiids on the jellyfish Periphylla periphylla and inside pyrosomes. Depending on the species of gelatinous zooplankton, the crustaceans use the host as a transport vehicle, as protection from predators, or as a source of food.

A major focus of our research visit is to study the connections between the midwater food web and the benthic food web (at the seafloor). When midwater animals die, the carcasses sink to the seafloor and, once deposited, the carcass becomes a so-called foodfall. The foodfall attracts a variety of benthic fauna including scavengers and create local areas of enrichment. For many deep-sea bottom ecosystems, the deposition of organic material from the water column onto the seafloor is the only source of food supply. However, we know little about which pelagic species are the major contributors of organic matter, and which scavengers benefit from the foodfalls. Observations of carcasses on the seafloor are very rare, in particular those of medium-sized animals since they are rapidly consumed (refer to Astrid’s cruise log). The ROV Doc Ricketts is a great instrument to study foodfalls. During previous MBARI cruises in the Gulf of California, the ROV surveys revealed that deep-sea squid sink to the seafloor and are eaten by various organisms including crustaceans and sea stars (https://www.mbari.org/squid-graveyard/).

On this cruise we have been performing seafloor ROV surveys to document and quantify foodfalls and their scavenging communities. On the very first day we already came across a Chrysaora jellyfish being eaten by sea stars. This particular foodfall was especially interesting since we observed it on the steep canyon walls. Using the unique VARS database of over 25 years of deep-sea observations, we plan to make an overview of the variety of foodfalls in Monterey Bay. Although the weather on Tuesday did not allow us to perform ROV operations, we used the shelter time inshore to collect large specimens of Chrysaora for future foodfall experiments.

It is a great experience to study the fascinating deep-sea fauna in the Monterey Canyon with MBARI’s Midwater Ecology Group, the ROV pilots, and the Western Flyer crew. Thank you!

November 15-21, 2019 – The Midwater Ecology Group is studying and collecting midwater animals in conjunction with collaborators from GEOMAR Helmholtz Centre for Ocean Research and Auckland University.