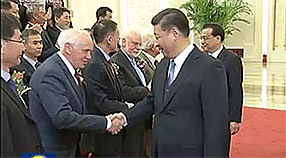 Peter Brewer shakes hands with China's President Xi Jinping during the award ceremony for the National Science and Technology Award.

MBARI Ocean Chemist Peter Brewer received the National Science and Technology Award from the Chinese government this week. The award was the culmination of Brewer’s years of collaboration and mentoring with Chinese ocean scientist.

In 2007, a young Ph.D. student from China joined Scientist Peter Brewer’s team at MBARI. This relationship set a course that neither mentor nor pupil could imagine. Through his 18-month collaboration at MBARI, Xin Zhang thrived under Brewer’s mentorship and guidance. The skills and techniques Zhang learned at MBARI prepared him for a successful research career when he returned to Chinese Academy of Sciences (CAS), where he quickly rose to professor at the CAS Institute of Oceanology in China. Although they were thousands of miles apart, Brewer and Zhang continued collaborating, which resulted in Brewer consulting on many projects with the CAS over the past decade.

Last January, Brewer received the 2017 Award for International Scientific Cooperation from the CAS. This award “honors top researchers from outside of China who have been in long-term collaborations with CAS, and who have made major achievements, including outstanding contributions to key technological breakthroughs” according to CAS.

Shortly after receiving this award, Brewer was nominated for the prestigious National Science and Technology Award. This week in Beijing, Brewer received this award, the highest honor granted to foreign scientists in China.

The National Science and Technology Award is “conferred on foreign individuals or organizations that have made important contributions to China’s science and technology development” according to the National Office for Science & Technology Awards. It is given to fewer than 10 people each year. Only 106 scientists have received the award from 1995 to 2016. This year the ceremony was held in the Great Hall of the People in Beijing and was attended by state leaders, including President Xi Jinping.

The honors bestowed on Brewer reflect the enormous commitment he has for advancing global deep-sea research and mentoring the next generation of scientists. 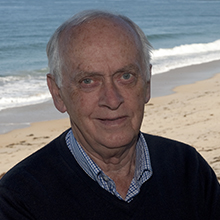